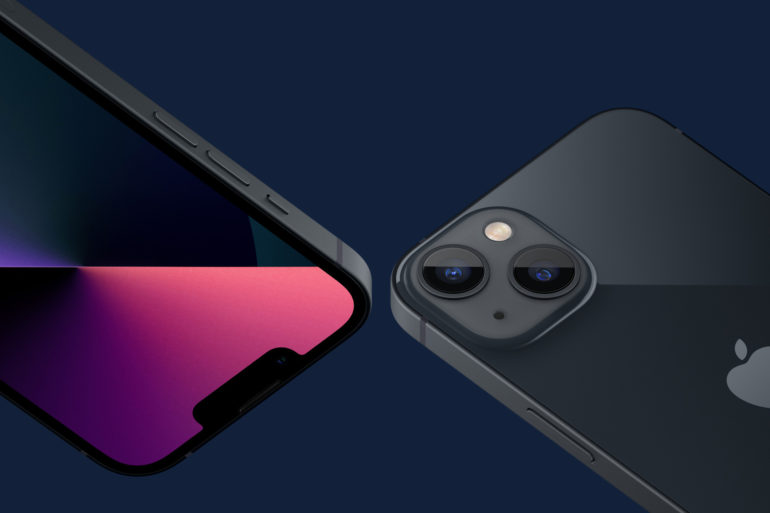 Apple’s new A15 Bionic chip delivers the iPhone 13 range with extra grunt and a longer battery life. Support for more 5G bands is also on offer, although it remains to be seen whether Australian models will add mmWave compatibility, or stick with only supporting sub-6 GHz 5G bands. Smart Data mode automatically shifts across to 4G when 5G speeds aren’t required, helping conserve power.

The four handsets offer a range of improvements but not a dramatic redesign, as to be expected in a “tick” year incremental update.

Sporting 6.1-inch and 5.4-inch screens, these iPhones stick with a 60 Hz refresh rate. They feature an improved Super Retina XDR OLED display which boosts the contrast ratio for true blacks. There’s a 28% increase in maximum outdoor brightness at 800 nits, with higher peak brightness at 1200 nits for HDR content like photos and videos.

On the front of the phones, the Apple iPhone 13 launch reveals the same 12 megapixel selfie camera. The big change is that the camera notch has shrunk by 20% to offer a little more screen real estate. Despite the difficulties in using Face ID while wearing a mask, Apple did not return support for Touch ID using an in-display fingerprint reader.

At the rear, Apple has stuck with dual 12 megapixel wide and ultra-wide camera lenses, but it has added sensor shift optical image stabilisation to the primary lens.

As usual, the improved cameras unveiled at the Apple iPhone 13 launch are one of the main things which separates these high-end models from the iPhone 13 and 13 mini.

The camera system gets a major overhaul with new Ultra Wide, Wide and Telephoto lenses. Along with sensor-shift optical stabilisation, there is support for enhanced macro photography and up to 2.2x improved low-light performance.

Under the bonnet, these handsets offer extra graphics grunt thanks to the A15 Bionic chip and 5 core GPU. Storage options go up to 1 TB. An extra 1.5 hours of extra battery life is promised for the Pro and 2.5 hours for the Pro Max.