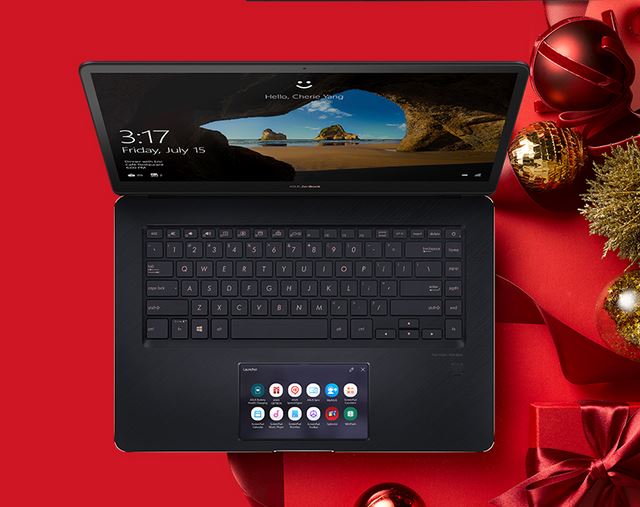 ASUS was very busy showing off a huge range of brand-new monitors, motherboards, routers and laptops, including its first-ever Studio Book. On top of that its Republic of Gamers (ROG) and new gaming brand TUF were very much in the game.

Or the fact that it has almost eliminated bezels (it calls that Frameless) from its new StudioBook S, ZenBook S13, ZenBook 14, VivoBook 14/15 and Chromebook Flip.

Overall, a range that GadgetGuy will be ready to review when it’s available.

GadgetGuy decided to upgrade to 4K or Retina monitors in 2018. Staff appreciate the extra definition and colours that 4K offers (10-bit, 1 billion colours, and huge colour gamut). ASUS ProArt encompasses all that and more.

Based on the Intel Z390 chipset, PA90 features up to a 9th Gen Intel Core i9 processor, NVIDIA Quadro graphics and support for Intel Optane Technology for high-performance storage.

The first workstation supporting quad graphics to deliver ultimate performance and scalability. Powered by Intel Xeon Scalable family processors with up to 28 cores per processor for a total of 56 cores in dual-processor configurations, 12 ECC memory modules and up to four of the latest NVIDIA Quadro RTX GPUs.

It is best for applications that process huge amounts of data on the fly, including computer animation, architecture modelling, science simulation and machine learning.

ZenBook 14 (UX431) has an 86% S-T-B-R with 8thh Gen Intel Core™ i7 quad-core CPU, up to NVIDIA GeForce MX150 graphics, 16GB RAM, an ultrafast PCIe SSD and gigabit-class Wi-Fi. It has the optional new NumberPad, an innovative LED-illuminated numeric keypad built into the touchpad.

VivoBook X412 and X512, feature compact designs available in trendy, eye-catching colours such as Peacock Blue and Coral Crush. The 88% S-T-B-R has 8th Gen Intel Core i7 processor, discrete NVIDIA graphics, and dual-storage as well as an ErgoLift design for better ergonomics and more comfortable typing.

StudioBook S (W700) is a thin 15-inch mobile workstation with Intel Core i7 or Xeon processors with an even larger display powered by NVIDIA Quadro graphics. For creative professionals, such as designers, animators, architects and programmers who need outstanding performance to handle professional applications ranging from complex renderings to 3D blueprints.

All feature military-grade durability, spill-resistant keyboards and all-around rubber bumpers to withstand the rigours that electronics often face in schools.

In addition to ASUS Republic of Gaming is TUF gaming with things like waterproof keyboards, military-style backpacks and mouse pads.

TUF Gaming has revealed its next-generation keyboard, TUF Gaming K7. The first ASUS optical-mech gaming keyboard it features optical switches that eliminate the debounce issues found in traditional mechanical keyboards. It has a frameless design with a top plate made from aircraft-grade 5052 aluminium for exceptional durability. It has IP56 water-resistance and floating keycaps with individual RGB lighting, which can be synchronised using the ASUS-exclusive Armoury II software.

Here are some key highlights on the latest ROG devices:

MOTHERSHIP: redefines gaming laptops with a revolutionary cooling system that allows the CPU and GPU to go beyond stock speeds and maintain exceptional performance with demanding workloads. Powered by the latest NVIDIA GeForce RTX graphics and Intel Core i9 processor

STRIX SCAR II (from $2,799): Built for the FPS side of the esports arena, the Strix SCAR II offers lightning speed with the NVIDIA GeForce RTX 2060 GPU