Battle of the smart speakers 2019 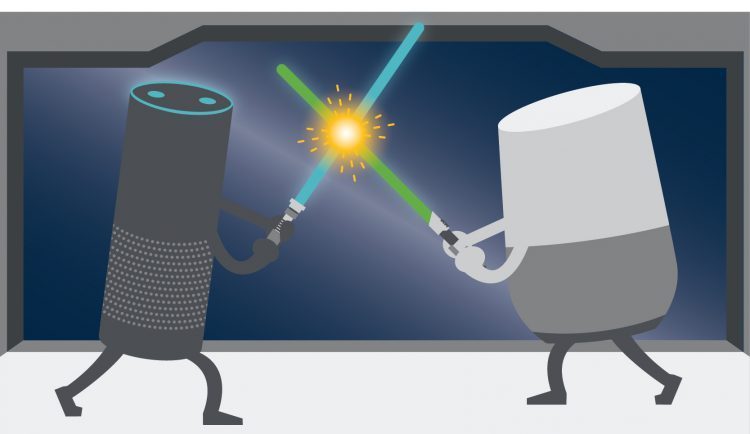 Who won the battle of the smart speakers 2019? In the right corner is Google Assistant, and the left is Amazon Alexa. Waiting patiently for her time in the Sun is Apple’s Siri and long forgotten is Bixby, Cortana and ThinQ – relegated to machine interfaces.

The battle of the smart speakers 2019 is a two-horse race unless you are an Apple user – then you chose Siri and play ever so slow catchup.

Who won the Battle of the smart speakers 2019. GadgetGuy looks at the devices and capabilities for Google Assistant and Amazon Alex and declares the winner.

Battle of the smart speakers 2019

The battle is no longer about which speaker does great music and offers voice assistance. Note that no Wi-Fi smart speaker offers hi-res audio although a few have Bluetooth aptX/adaptive/LL/HD, AAC and LDAC codes. The battle of the smart speakers 2019 and moving forward is what they can do for you.

Google Nest, Sonos, Bose, JBL, Lenovo, Klipsch, Sony, Panasonic, Polk, House of Marley and a raft of other brands not seen at retailers have an excellent range of Google Assistant Wi-Fi/BT speakers. Click here to view all our OK Google speaker reviews.

On the Google smart display front, Google Nest has the Home Hub and Hub Max, Lenovo the 8 and 10” Smart Display and Smart Clock and JBL Link View.

Many 2019 TVs now have Google Assistant inbuilt or can use an inexpensive Google Next Mini speaker to add voice support. For example, Samsung’s Bixby and LG’s ThinQ are machine interfaces between Google Assistant and the device – as they should be.

On the car front – well Android Auto is really Google Assistant on wheels, and companies like JBL have add-ons like its Link Drive. Although the main advances here are closer integration with the car operating system.

Oh, and every recent Android smartphone, tablet and many wearables has Google Assistant! In Australia, that is roughly half of all devices – iOS has the other half. Globally that is nearly 90% of mobile devices.

Yes, the Google Assistant ecosystem is growing, and pundits say that if a device does not have voice capability in 2020, there will be plenty of competitors that do. You can read what Google Assistant can do here.

First an apology to Alexa. Thomas Bartlett is GadgetGuy’s Alexa expert, and I am our Google Assistant expert. We need to keep the testbeds separate to ensure objectivity. Our (out-of-date) Guide to Alexa 101 is here and Amazon’s guide is here.

Amazon has its own Echo range including Dot/Clock, Input, Show 5/8 (display), Echo/Plus and Studio and a sub. Ultimate Ears has the Blast and MegaBlast and brands like Sonos and Bose support either Alexa or Google Assistant.

In the home automation area is has its Ring security range and many devices work with Alexa or Google Assistant – there is a significant crossover of major brands like Philips, LIFX, Logitech, Arlo etc.

In the home appliance area (and TVs), Alexa’s commands tend to be limited to turning on or off devices – that could be said of Google as well.

And the speaker winner is?

GadgetGuy spoke to our spies at JB. “Mate, there is no comparison. Google Assistant outsells Alexa three-to-four-times, especially when you start to look at the broader IoT device support. Our most popular device is Lenovo’s 7 or 10” smart display.”

Voicebot.ai reports that in January 2019, Google was already at 68% Australian market share versus Alexa at 14.2% and Siri at 5.5%. At that time, 29% of Australian households had a smart speaker. A consumer survey by Deloitte in October shows Google’s lead increasing to 74% and Alexa down to 8.2%.

Interestingly in the US, Alexa has 62.2% to Google’s 23.9% and Siri’s 15% (January 2019). But that brings us to the Global figures. Google is not allowed in China where Baidu, Xiaomi and Alibaba dominate that market. Amazon does best in the US and Google elsewhere.

Voicebot.ai says the key reason for Alexa penetration in the US is price related, “Amazon Prime Day. The mid-July sales event provides Amazon with a simple method to drive consumer attention and promote [$35] smart speaker sales.” What next – a giveaway with Cornflakes?

Battle of the smart speakers 2019 software?

As far as we can tell Alexa requires less hardware to work as it is basically a cloud-based ‘skill’. To access a ‘skill’ you look for one in the Skill store and add it to Alexa.

Alexa has about 80,000 skills ‘globally’, but our experience is that a fraction of those work in Australia. Many of the skills access existing Google apps, e.g. “Alexa open ABC iView”.

Loup Ventures says that Alexa skills ‘exploded’ because they were easy to write as an add-on to an existing app or device. “Alexa Skills Blueprints now enable anyone to create a Skill ‘in minutes’ without code and then publish them to the Alexa Skills store.”

It is timely to remind you that Alexa is a product of Amazon with designs on opening your shopping wallet. Amazon gently steers users towards Amazon Prime services or its merchants.

Earlier in 2019, Loup Ventures shows the inherent bias/pedigree with this question, “How much would a manicure cost?”

Google ‘Actions’ requires more onboard computing power/intelligence, especially in its speakers to do some local processing and to get over issues with the internet being off-line, e.g. to do local processing. As present Google claims more than 1 million actions – up significantly from 1500 at the start of 2018!

You don’t need to add an Action to Google Assistant. The device app will offer to link, and that is it. Google takes over the interface. Software developers say this is a more secure way as Google is really controlling the device – not the app.

Google offers Template Actions for the Google Assistant and claims it is just as easy as building an Alexa skill.

It is timely to remind users that Google uses your data (anonymously) to sell advertising – its primary income.

Google has its powerful search engine resources, and Alexa has Bing.

And the software winner is?

A close call. Logic says Google Assistant is more relevant to Australians due to the sheer weight of user numbers and local knowledge.

But both companies know it is not about devices but the software – applications – so this is where the war is won.

If you want to know what we do with smart speakers read here.

BUT, and here is the biggie, every skill or action can potentially generate personally identifiable information (PII)

It may come down to which company do you trust?

It is our job to ensure that people are aware that they are handing over their data to FAANG – Facebook, Amazon, Apple, Netflix and Google (and Twitter, Microsoft et al.). All companies have lost a lot of trust due to privacy concerns and bad press – especially Facebook (you can read some of those horrible Facebook f’ups here).

According to Business Insider, 50% of Australia’s don’t trust the retail ‘giant’ Amazon (ranked as the world’s most valuable brand followed closely by Google and Apple). Product Review Australia gives Amazon 1.6-out-of-5 due to abysmal service, incorrect product delivery, lack of price competitiveness, steering to Amazon products, poor organisation etc. To a degree, this result is due to only about 7% of Australians using it compared to 63% using eBay. In the US you would be hard-pressed to find a non-user. And eBay does not score much heter at 2-out-of-5.

Interestingly Google is among the most trusted companies according to The Verge (itself one of the more cynical media). It says Google has passionate users that would care very much if it disappeared tomorrow and feel it has a positive impact on society.

That same US study classed Amazon as the ruthless corporate juggernaut that people love.

But Alexa is pretty good. If you are firmly in the Amazon ecosystem, this is for you although about half of Alexa owners also have Google Assistant or Siri smart speakers.

You must take the trust angle with a grain of salt.

For example, many Australian’s only interaction with Google is via search – even Apple users prefer Google Search. They trust it to deliver a huge range of relatively unbiased results with clear identification of paid listings.

Aussies also seem to trust Google with its PII to target tailored advertisements to them (96% of its business is advertising sales and most users are aware of and happy with that) – or use a VPN and Ad-blocker.

Amazon suffers in Australia because it was a later entrant, and it is a shopping giant. eBay has a substantial lead in Australia and it and Gerry Harvey are not afraid to defend their turf against the ‘evil Amazon’. Our US correspondent Sam Bocetta wrote a telling piece on American’s changing attitude to Amazon – When ambition exceeds sensibility.

In the end, I feel sorry for Apple users – Siri has a long way to go for its place in the sun. At least with the constant war between Amazon and Google, we see gems of technology emerge that can really help us.