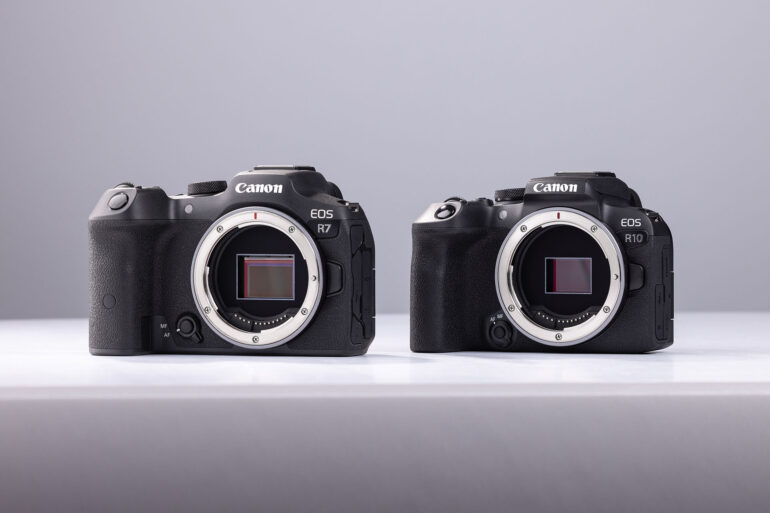 Made for photographers and content creators, the pair of new Canon cameras, the EOS R7 and EOS R10, combines the EOS R system with the APS-C image sensor into a mirrorless body. The result? Strong photographic and video performance at a lower price than the previously-announced EOS R5 C.

Both cameras feature Canon’s new-generation RF lens mount in addition to the same intelligent autofocus technology used in the company’s full frame cameras. This latter point means you can track moving subjects such as vehicles, animals and people, thanks to a combination of deep learning and Dual Pixel CMOS AF II tech. This includes face and eye detection across the frame and is ideal for capturing fast-action sports and wildlife.

Featuring a 24.2 megapixel sensor, the EOS R10 can rapidly take photos at 15 FPS with its continuous mechanical shutter, boosted up to 23 frames with the electronic shutter. Conversely, the beefier EOS R7 has a 32.5 megapixel sensor, and can snap 30 FPS with the electronic shutter. Lightweight and easy to capture images on the go, the EOS R10 weighs only 429 grams and the EOS R7 tips the scales at just over 612 grams.

As for each camera’s video capabilities, the EOS R10 shoots up to 4K at 30 frames, while the EOS R7 is able to reach 60 FPS when shooting in 4K and includes in-body image stabilisation. Another EOS 7 feature of note is that it is the first APS-C EOS camera outside the more expensive Cinema EOS range to use Canon Log 3 and Cinema Gamut, which Canon says enables more flexible editing options.

Both cameras are impressive additions to the Canon range of DSLRs, and it’s clear the push into hybrid cameras delivering solid still photography and video options is geared at content creators. Based on specs alone, the EOS R10 will likely suit most enthusiast photographers and videographers out there, while the EOS R7 appears to be better suited to those who want to take things a bit more seriously without breaking the bank.