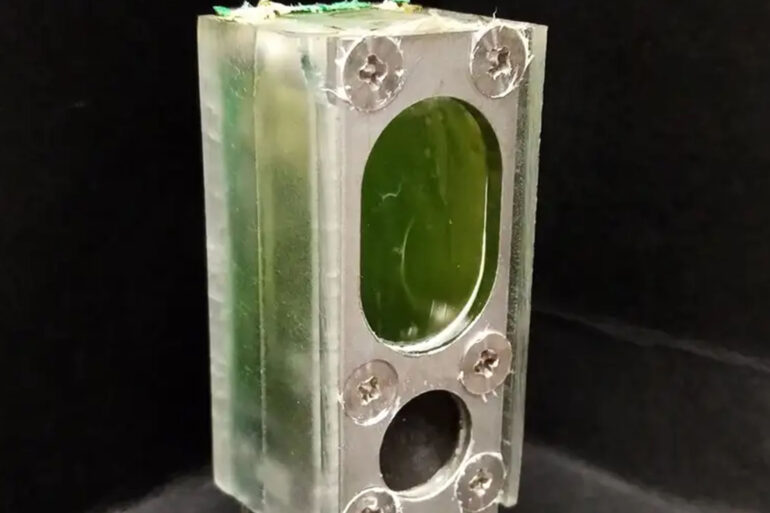 Scientists have managed to power a computer capable of performing calculations by sealing blue-green algae in a transparent container, in an experiment that could lead to more sustainable energy sources.

As reported by New Scientist, researchers from the University of Cambridge constructed a container, roughly the size of a AA battery, made from aluminium and plastic. Connected to an Arm processor, the container housed a colony of blue-green algae – what is scientifically known as Synechocystis sp. PCC 6803, a type of cyanobacteria – generating oxygen via photosynthesis.

Throughout 2021, between February and August, this device sat on the windowsill of one team member, where the photosynthesis process provided a current to the microprocessor through its anode and cathode setup. From a computational process, the makeshift computer calculated sums for 45 minutes at a time, followed by 15 minutes of standby. During this, it required between 0.24 and 0.3 microwatts of power, which was measured and stored in the cloud for analysis.

The power remained constant for the six-month period, with no interruptions, and the blue-green algae even continued producing power after the experiment concluded. As for the reason behind the power generation, two theories were presented: one is that the algae produced its own electrons and current, while the other suggests corrosion of the aluminium anode produced electrons in a chemical reaction.

Although photosynthesis occurs in the presence of sunlight, power production via cyanobacteria like blue-green algae is possible during nighttime as well. One reason researchers suggest this is possible is that the food produced by the algae during photosynthesis results in a surplus, which continues to be processed after the sun goes down.

Similar methods of energy sources are already being tested using empty plastic bottles, with commercial application potential within five years for cheap power production. Some species of algae generate higher currents, too, according to researchers.

As demand for cheap, renewable energy climbs, unique methods of power production are good to see.