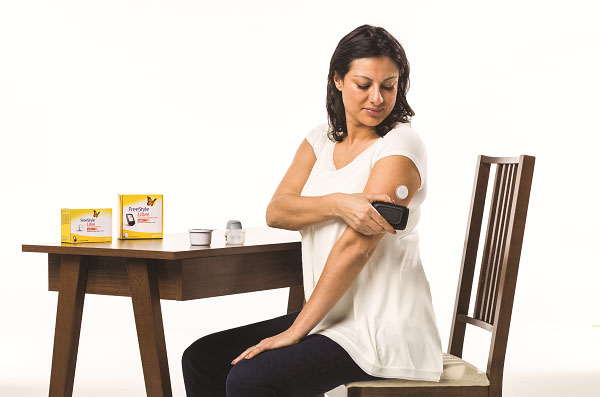 We all know someone with diabetes, and depending on how hard it affects them, there’s a good chance they have to go through the arduous task of checking blood sugar levels daily, but a gadget could at least make this less tiresome.

It’s called the FreeStyle Libre Flash Glucose Monitoring System, and while the name may well be long and complicated, the concept isn’t.

Simply put, the FreeStyle Libre — which is what we’re going to call it just for the sake of keeping things short and maintaining our sanity — is a glucose level scanning patch reliant on the interstitial fluid in your skin that you leave on your body for two weeks, with the sugar monitoring occurring over a contactless electronic reader.

In a way, it’s like having a temporary glucose sensor attached to your body for two weeks of your life, out of sight and out of mind, with the monitoring taken care of simply by waving a gadget over the spot where that patch sits, even with clothes on.

The sensor is even highly water-resistant, meaning you can shower with it attached, and even go for a swim, staying on the body for 14 days before needing to be replaced.

“FreeStyle Libre represents a significant advance in the field of glucose monitoring,” said Professor Stephen Twigg, Head of the Department of Endocrinology at RPA Hospital in Sydney.

“This technology offers a highly convenient and quite painless way to acquire more frequent glucose readings. It enables detailed, actionable glucose profiles that will support people with diabetes across their day, and also encourages a more productive discussion between the patient and their healthcare professional.”

While the technology has obvious potential to do away with the annoy blood prick tests, it also could lead to better diabetes management simply because the information gleaned from the technology should be more detailed overall, with up to eight-hours of history taken in the reading and stores for later on.

The gadget used to capture this is basically a small wireless computer, and this will track patient history, indicating how well someone is going, with hypoglycaemic and hyperglycaemic trends.

And for the experts, this is useful not just because the history is more detailed, but because it will track times when patients aren’t actively checking levels.

“Taking isolated blood glucose readings now and then doesn’t give the whole picture, as levels can markedly fluctuate between such times, including during sleep,” said Professor Twigg.

There are some catches to the system that are worth noting, with one being price and the other being how disposable it is, and the two could make it a more costly solution to the treatment of diabetes than some realise.

For instance, the gadget used to check the sensor — the scanner — costs $95 and can only be used for one sensor, so if you have two people with diabetes in the home, you need two scanners, one for each person.

Your phone could theoretically be used to fill in this voice — because why should you have to carry an extra device when your phone likely has all the technology you need? — but the app isn’t here yet. It’s in the pipeline, but still a way’s off.

The price of each sensor could also be a little prohibitive in the beginning, with a sensor lasting 14 days before needing to be replaced and costing $95 each. That means a year’s worth of sensors will cost a little under $2500 AUD ($2470).

We’re told there’s no inclusion for this under the Pharmaceutical Benefits Scheme, so that’s a cost you’ll have to take care of yourself.

For some, this won’t be much of an issue, as the ability to check your sugar levels easily and painlessly will outweigh the cost, but when a glucose metre can be found for anywhere between $20 and $200, it’s a price that will no doubt cause some to flinch.

“We are now able to provide an innovative solution that removes the pain and hassle of routine finger pricking, improves daily diabetes management and ultimately, helps people with diabetes to live happier and healthier lives.”

As for where you’ll find the FreeStyle Libre Flash Glucose Monitoring System, the company’s website on the technology is so far the only place where you can find it, with the sensor and scanner available for $95 each.