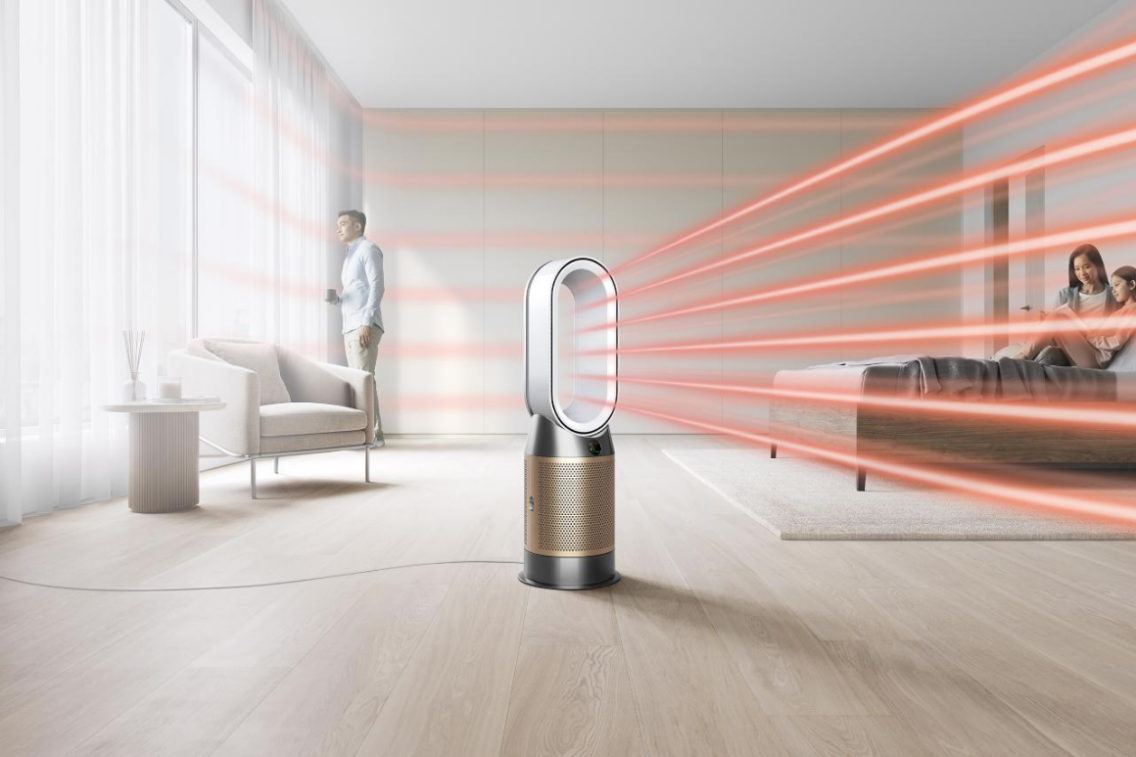 When Dyson showed me its Dyson Purifier Hot+Cool Formaldehyde (HP09), I quietly chortled under my breath. What else will Dyson discover that will silently kill us, I pondered?

My wife often complains of my flatulence (Nitrogen N2, Hydrogen H, Carbon Dioxide CO2, Oxygen O2, and Methane CH4) – perhaps the 2022 Dyson air purifier will stealthily clean that air. Oh, wait, Dyson has been doing that for years. Must remember to ‘expellarseus’ (channelling Harry Potter) next to it in future. Perhaps I should put one in every room.

But as the demo proceeds and the impossibly young Brit Dyson scientist, who has been working on this problem for ‘25 years’ explains:

Dyson’s Selective Catalytic Oxidisation (SCO) filter continuously destroys Formaldehyde at a molecular level. The catalytic filter has a unique coating with the same structure as the Cryptomelane mineral. Its billions of atom-sized tunnels are the optimal size and shape to trap and destroy Formaldehyde. It breaks it down into tiny amounts of water (H20) and carbon dioxide (CO2). It then regenerates from oxygen in the air to keep destroying it continuously without ever requiring replacement.

Righty-o chaps – clear as mud. But the quest begins. Is Dyson really onto something?

Before I can review this device, I need to understand the dangers of Formaldehyde, used amongst other things, to embalm corpses. So we start at Cremation Solutions.com (I paraphrase along with Cancer.gov, where I think the original text came from).

Individuals repeatedly exposed to Formaldehyde include the workers making it, lab technicians, and morticians. The chemical is dangerous in the air at a level of more than 0.1 ppm (one part per million). It can cause adverse effects like coughing, nausea, watery eyes, skin irritation and a burning sensation around the nose and eyes. The International Agency for Research on Cancer and the National Toxicology Program classifies it as a human carcinogen. National Cancer Institute investigators have concluded that prolonged exposure may cause myeloid leukemia in humans.

In 1987 the US Occupational Safety and Health Administration (OSHA) reduced the 8-hour workday formaldehyde exposure standard from 3.0ppm to 1.0ppm. In May 1992, the exposure limit was reduced again to 0.75 ppm. But there is quite a disconnect between 0.10ppm, which Cancer.gov states is dangerous and OSHA’s 0.75ppm (7.5x higher).

I am not a scientist or toxicologist – we will leave that to the experts. Dyson believes that Formaldehyde elimination is worth the effort and not just another way to sell air purifiers. I believe them.

How much Formaldehyde is Joe and Jane Average exposed to?

The real question is where it comes from and how and where are we exposed?

On average, Formaldehyde is in the air we breathe, at around 0.03ppm (approx. 1/3rd of the Cancer.gov dangerous level).

The primary source is automotive use, pressed-wood particleboard, plywood, and fibreboard from the urea-based glue used. Not saying the new car smell or the famous IKEA flat-pack is killing us, but you are inhaling Formaldehyde you buy a new car or open a pack. It is also in permanent-press fabrics, paper product coatings, disposable nappies and insulation materials. In addition, Formaldehyde is also used as an industrial fungicide, germicide, and disinfectant.

So apart from the poor morticians who have been using it and dying from it since the 1880s, it is the wonder glue of the 21st century. If properly handled, it is without equal.

It is a 21st-century problem because we live in a flat-pack world, in high–rise apartments with recirculated air conditioning, and don’t open windows. If you live in an older home with wide-open windows, you should not have an issue until you install compressed hardwood or faux wood flooring. Oh, it is in new carpet as well.

In so far as science is concerned – yes, 100% destruction with no harmful by-products.

Formaldehyde’s chemical equation is CH2O. Nerds will understand that is one carbon molecule, two hydrogen molecules and one oxygen molecule. When released outside, it breaks down quickly under sunlight to carbon (C or black soot) and water (H2O).

First is a ‘catalytic converter’ (a catalyst that causes something to happen without being used in the process) that breaks Formaldehyde down to tiny amounts of water (H2O) and carbon dioxide (CO2). It lasts a lifetime because it regenerates during the process.

The second is a new type of sensor to measure Formaldehyde. This was the province of an expensive exhaustible gel to detect it – not good for long term use. Dyson has invented a solid-state detector to measure mg/m3 – damned hard as formaldehyde gas is 500 times smaller than particles trapped in its HEPA and activated charcoal filters.

On that note, understand that no other consumer air purifier (apart from this) can remove Formaldehyde (it is gas – not a particle) via HEPA or Activated charcoal filters – any claims otherwise are pure BS.

We quote: No filter-based consumer air purifier can remove Formaldehyde – filters only trap down to 1.0um particles (most only trap to 3um). Carbon filters can trap many chemical gasses (VOCs) but cannot retain Formaldehyde. You must destroy it – break it down to its component elements.

I love the Dyson style. The sleek, tall, bladeless air circulator, metal air intake grill and the plethora of information it shows on the colour LCD and the Dyson app. BTW – Dyson now answers to OK Google!

I love the Dyson build quality – no faux metal or cheap plastic parts. It oozes quality – I have a decade old Dyson fan/heater AM04 that still looks and works like new.

And I love Dyson service. If you need warranty support, they send you a prepaid shipping carton. It is quickly repaired or replaced then sent back prepaid. You can’t beat that.

Finally, it is one of the few that correctly use the Coandă effect – an air multiplier and jet focus which produces at least 10x times the airflow from a smaller device. It is perfect for creating micro-climates with good energy efficiency.

I guess that is why this costs $999 – if you question the price, it is not for you. And if you don’t have a Formaldehyde problem, the Dyson Purifier Hot+Cool purifying fan heater (black/nickel or white/silver) HP07 at $899 may be just right for you.

CADR – not the way to measure a Dyson

Most air purifiers quote CADR (clean air delivery rate). In theory, the higher CADR, the larger room it can purify. Except that most air purifiers are a) static towers that sit in the corner of the room and b) suck in the air adjacent to them.

Dyson not only sucks air in from all around (360°) but also expels it out of the bladeless fan using the Coandă effect (how air flows over an aircraft wing creating uplift), pulling along at least 10x times air it expels. That means it can clean more air faster (air clean rate) from more areas in the room than a standard purifier.

On fan speed 10 (max), this has a rate of 314 Litres/second by the 10x multiplier = 113,040 L/Hr or CADR of 113m3/hr. For comparison, a standard bedroom is about 25m3, so it would clean all the air four times. But you are more likely to use a lower fan speed (say 5), so that is two times – well above accepted CADR rates. And once the air is clean, as long as doors and windows are closed, it remains clean.

Airflow – it is a fan too

This is where Dyson wins hands down over a static tower purifier – it is a fan!

First, you need to know what it senses and traps.

The new sealed system HEPA and Carbon filter captures most gases and 99.95% of particles as small as 0.1 microns. That means Pollen and allergens, bacteria, and ultrafine particles – nothing escapes the new sealed system filter. The filter has a life of about 4000 hours – the machine will tell you when to change it. The new combo 360° PTFE HEPA H13 and activated carbon filter works with the HP09, HP07, HP04, TP07, TP04 and DP04 and costs $99 including freight – quite reasonable.

Gases include odours (cooking fumes and flatulence), Benzene, Nitrogen Dioxide (auto exhaust, tobacco, wood/gas burning) and VOCs (Volatile organic compounds). VOCs are wide-ranging – far too many to list, but generally come from paint, cleaning supplies, pesticides, glues etc. and are up to five times more concentrated inside a home. You can read more on VOCs here.

We have discussed Formaldehyde, and it has a separate lifetime catalyst that fits inside the filter unit and destroys, not traps it.

LCD indicator – lets you know at a glance

The information is also in the Dyson app. It is also a remote control. If you like to know about your environment, there is no better app. There is one caveat – you need to enable continuous monitoring. Oh, and it is now Google Assistant and Alexa capable.

They are ultra-safe around children as they have no fan blades or hot surfaces. But the tower can present a tripping hazard to small children, although the weight is probably insufficient to do any damage.

Sound depends on fan speeds and, to some degree, the surface it sits on. In all, up to fan speed five is relatively quiet.

Our tests were: (auto is the best and most cost-effective setting)

It has a 1.8m wall plug cable. It can go from idle (fraction of a watt) to up to 2500W, depending on fan speed and temperature.

One of the terrific advantages of the Dyson design is that it can also create a micro-climate to focus the airflow over a smaller area via tilt and radius oscillation from 0-350° in 45° increments.

Let’s say you are in a large open space kitchen/dining/lounge; you can heat an area about 2 metres wide up to 3 metres away – that cosy lounge that you watch TV from. It means that you are not heating the entire area. Remember that few (if any) currently available air purifiers are fans and heaters as well.

As I inferred at the beginning of this review, you could call me a formaldehyde sceptic. No longer. Just let loose some hairspray nearby, and the reading goes off the scale.

When we unpacked the Dyson Purifier Hot+Cool Formaldehyde, the HCHO reading was a surprisingly high 0.25 mg/m3 (ppm) – 2.5x above 0.10 advocated by Cancer.Gov. I say surprisingly because we have minimal flat-pack, and the home is a decade old, so we thought it would be gone. We tracked the emission down to a recently professionally dry-cleaned feature rug that was still outgassing.

After a week, it had reduced to 0.009mg/m3. But we also saw it ramp up when cooking on the gas cooktop until we turned on the range hood fan.

So, no, I don’t need the Dyson Purifier Hot+Cool Formaldehyde (HP09) where I live, but hey – for an extra $100 over the HP07, and it has a lifetime catalytic converter, it is worth it.

Finally, let me repeat the warning – consumer air purifiers don’t destroy Formaldehyde. As far as we can tell, Dyson is the only destroyer.

Watch from 2:30 – its 13 minutes but may help you decide to open your wallet

Dyson Purifier Hot+Cool Formaldehyde (HP09)
Does it work? Absolutely - no better. And it is a terrific fan heater as well.
Features
10
Value for money
9
Performance
10
Ease of use
10
Design
10
Positives
High tech information – use with and without an app
Easy to use – remote control and app control
Very efficient fan/heater/air purifier/formaldehyde killer for year-round use
Cleans the air faster than a non-fan purifier– forget about CADR
Recommended for a large home, open space or office spaces
Well-made and premium – it is a keeper
Never have to replace the Formaldehyde catalytic converter
Negatives
Depending on use, the $99 HEPA/Carbon filter needs replacing every 12-24 months
Lets not talk about price - its value and what it does that counts
9.8