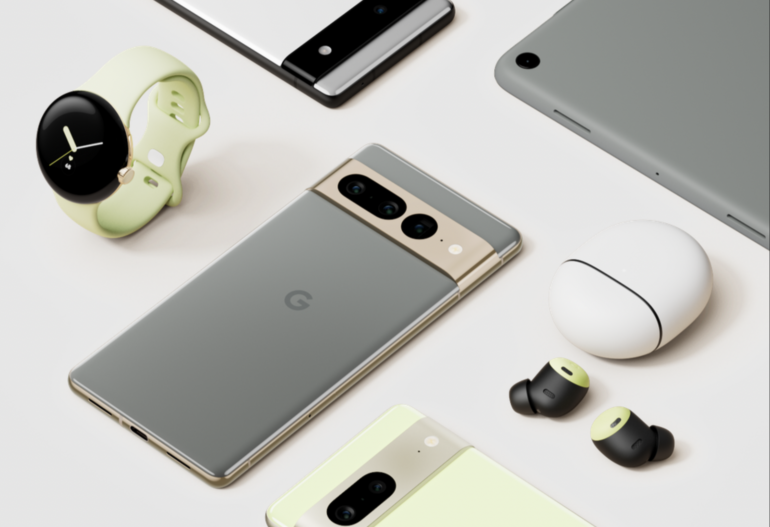 Alongside new Pixel smartphones, Google is going head-to-head with rivals like Apple and Samsung across the board as it unveils an expanded Google Pixel hardware range at the Google I/O developer conference in California.

While unveiling the long-awaited Google Pixel 6a and offering a sneak peek at the Pixel 7 line-up, Google also took the wraps off an expanded Pixel portfolio with a Pixel Watch, Pixel Tablet and Pixel Tablet Buds Pro.

“We’re going for the ecosystem,” says Google head of consumer hardware Rick Osterloh. “We want people to know where Google is headed with devices as an organisation over the next few years.”

The Pixel Buds Pro are the first Google earbuds to offer active noise cancellation, thanks to a custom 6-core audio chip which runs Google-developed algorithms. Google claims a seven-hour battery life with noise-cancelling enabled, or up to 11 hours without it. Taking advantage of the charging case extends those up to 20 hours and 31 hours respectively.

The Pixel Buds Pro can also pair with multiple devices simultaneously, making it easy to switch between devices like smartphones, tablets and computers without the need to re-pair.

The Pixel Buds Pro come in three colours, sell for $299 and will be available for pre-order on July 21 and on the shelves July 28.

Looking like a traditional wristwatch, the Google Pixel Watch features a round face design and side dial. The watch syncs with smartphones, with optional 4G LTE, but it’s important to note that it is only compatible with Android smartphones, not Apple’s iPhones.

The Google Pixel Watch is set to go on sale in the Australian Spring, with pricing yet to be revealed.

The tech giant is also returning to tablets, with the Pixel Tablet set to debut next year. Details are scarce, although it will feature a Tensor chip and a range of tablet-specific Android 13 optimisations. Pricing is yet to be announced.