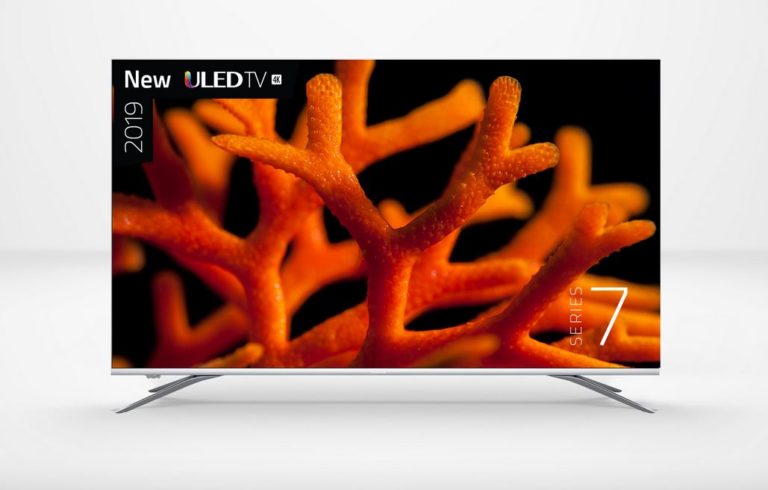 Hisense is still a challenger brand chasing after the ‘big three’ market share. It does this by having a huge range of TVs with different feature sets and prices. Its Hisense 2019 series 7 (R7) is a TV for all – a great mid-range set.

Hisense Australia says, “2019 is shaping up to be a big year for Hisense. Demand for our consumer electronics and home appliances is continuing to grow, both from consumers and retailers. As a result of this demand, we are expanding our offerings across our existing categories in 2019 and are also launching into new categories. It’s an exciting time and we look forward to sharing some more detail on our business growth in the coming months.“

At the time we uncharacteristically said that the recommended retail prices were too high for a ‘challenger’ brand and should be a step under that of similar ranges from Samsung, LG, Panasonic or Sony. We do not normally comment on price – value is in the eye of the beholder.

To be fair better retailers like JB Hi-Fi, Bing Lee and Good Guys lowered prices, so Hisense had a good year.

Let me start by saying that I tend to review the top-end-of-town products, so for me, I was a little taken aback when asked to review the Hisense 2019 Series 7 (R7). I do not mean that negatively – I was impressed with the series 8 and 9 last year. But I did not expect greatness – I was pleasantly surprised.

Again, I repeat that these are RRP and buyers should practice severe arm twisting if they decide to go this way.

What is Dolby Vision and Dolby Atmos?

If you are buying a TV in 2019, go for Dolby Vision and Atmos if you can afford it.

Analysts agree that Dolby Vision has won the HDR (High Dynamic Range) race. It improves details in dark areas and stops a wash-out of detail in light areas. HDR is the base standard, and Dolby Vision encompasses the higher HDR10 and HDR10+ standard as well.

A movie (content) contains ‘metadata’ that reveals the details. The TV decodes this as part of the HEVC.265 data stream.

Dolby Atmos is 3D sound where up to 128 sound ‘objects’ can move around you – overhead, behind, left, centre, right, etc.

In this case, the R7 decodes 5.1.2 (Front left/centre/right, left up/right up and subwoofer) sound and downmixes it to the TV’s 30W 2.0 (left/right) speakers. But importantly it passes through the Dolby Atmos sound via HDMI ARC to a soundbar. If that is Dolby Atmos compatible then it will reproduce Dolby Atmos sound or again downmix it to the soundbar’s capability.

So how does the screen look?

Remember we are comparing this to other mid-range TVs. We set the screen to factory defaults (not as all TV makers do – the store mode that oversaturates colours and brightness). Our only alteration to the defaults was to set it in Dynamic mode and to enable Dolby Vision.

It has pre-set for dynamic, day, night and sports. While these adjust gamma slightly, the Dynamic provides the most saturated colours that Australian’s covet. Night mode provides the best natural colours in a darkened environment.

The screen assessment is on two levels.

The first is to the naked eye, and it passes the visual tests with ease. Colours are relatively accurate, HDR details are there, and overall it is a good picture.

The second is via a suite of tests with greyscale and colour bar generators that bring out the best (or worst) in the panel.

We test in 2% increments. It covered 96% with the last two black bars merging which is typical of edge-lit LCD TV – you can never achieve true black. The top end whites were good. Pass.

We test for Red, Green and Blue (RGB) primary colour accuracy and then secondary ‘manufactured’ colours like pink, yellow, light blue and white.

RGB was good as were the secondary colours. There was a little colour overlap where the bars abutted each other. While the main colour bars were even the lower set had a slight blotchiness. That is typical of almost any bottom edge-lit panel. Pass.

The screen cannot be Dolby Vision unless it can reproduce every tone. The simple test below shows it can faithfully reproduce most tones. However, we did change the colour temperature slightly to cool down the reds a little.

Like last year’s P7 reflectivity, it is still an issue for brightly lit rooms. The image below is in a darkened room with lights off overhead and behind and on at the far left.

The warning applies to any TVs that have a glossy coating – you must be able to control lighting. This was not any worse than most I have seen. Pass with caveats – you need to control light sources.

Hisense is a bit cheeky using the term Backlight – it is bottom edge lit LCD dimming.

The Hisense Series 7 R7 achieves local dimming via PWM (Pulse Width Modulation). If you wanted 70% screen brightness, you would keep the digital signal on for 70% of the time and off for 30% of the time. These flickering ‘breaks’ are rapid, with the frequency measured in Hertz (Hz), or the number of times per second.

Your eyes cannot see this as the refresh rate is a higher frequency than you can see, but we can photograph it using higher shutter speeds. Because it is LCD based with an LED edge-lit light source, you can see the flicker.

This screen is like other brands in this class and for some people can cause eyestrain, headaches, nausea as the eye’s pupil has multiple rapid contraction and expansions. If you suffer this, then an OLED screen is what you need.

The easiest cure to PWM sensitivity is to have the screen as bright as possible in a bright room! You can also play with (turn off) Dynamic Backlighting, Adaptive Contrast and Ultra Smooth Motion controls (not tested).

Dolby Vision needs Dolby Vision content, usually found on 4K Blu-ray and increasingly from online sources. If you have the more expensive Netflix 4K account and a decent NBN50 or higher you can stream Dolby Vision/Dolby Atmos content  – otherwise you will get HDR and 2.0 to 5.1 sound.

Using a suitable Star Trek Discovery clip reveals that it achieves around 80% of the best Dolby vision I have seen – note the left eye details of the Klingon. On a top range TV, you will see the right eye detail down the pupil.

While Hisense claims 89° (that is almost a right angle) the reality is it also claimed this for the P7 series last year. Off-angle viewing at about 60° starts to see a colour shift and past 75° colours wash out. Hey, it is no worse than any other mid-range brand.

It has a 15W 2.0 (30W total) system comprising two tweeters and four mid-range speakers. Let me preface comments by the fact that even a $300 2.1 stereo soundbar will enhance most TV sound and this is Dolby Atmos capable so buy a damned Atmos sound bar!

Overall volume was 78.4dB – loud enough for most smaller lounge rooms. At this level, it was a tad harsh as our frequency spectrum analyser reveals.

It has pre-set for standard, speech, late night, music, theatre, sports and a custom EQ. Regrettably like most EQs, it does very little to the native signature of the speakers.

I want to remind you of our sound measurement paradigms.

We just against six sound signatures. ‘Warm and sweet’ is the nirvana for movies and music or ‘mid’ for clear voice (and it is OK if you can use an EQ to add more bass or treble). The last thing you want on a TV is the first three.

Note: Frequency response is from 20Hz to 20kHz, which is outside the human hearing range.

This is Bight vocal signature and despite EQ pre-sets you simply cannot get bass out of these speakers. You need a separate sub-woofer to achieve that.

The treble is ‘peaky’ meaning its harsh at full volume.

VIDAA is Hisense’s take on a smart TV, and you could compare it to Android TV, LG webOS, Panasonic MyHomeScreen, and Samsung Tizen etc. Hisense says it may offer Android TV on some models in 2019.

VIDAA U 3.0 is the TV operating system. It is noticeably better than V2.5 last year with a more polished interface and AI. It also has a SmartSense hub that can display weather, a discover feature and will recommend trending shows and content that users relate to.

Netflix, Stan and YouTube are on the remote. The expanded App store has Amazon Prime. It tries to autodetect attached devices (not tested).

Out of the box, it will integrate to Alexa as a skill which allows it to turn off (not on), change volume and inputs. At present, you need an Echo Dot speaker, and later this year it will support Alexa on the device and after that Google Assistant via a speaker.

It is important that Hisense has its proprietary OS under the Made In China 2025 initiatives where every component and operating system is Chinese made. Hisense already makes its own panels, and its processing power comes from a custom system-on-a-chip.

Its RemoteNOW app for Android (tested) and iOS (not tested) works via Wi-Fi. We used it last year, and it was OK, not great. Users have complained of onerous permission settings including access to phone and contacts – which causes issues if you deny them. Still, you don’t need to use it – the traditional IR remote has buttons for almost everything.

OK, we have poked and prodded and not really found it wanting. It has everything you could want in a 65-inch mid-range TV except that at RRP it is not price competitive (and we seldom comment on that aspect – value is up to you).

So, I was impressed to see the 65-inch at $1999 (RRP $2499) from VideoPro, and doubtless, you can do deals with major electronics retailers. That alone adds a point for value for money, and then you can get a decent Dolby Atmos soundbar (at least 3.1.2 and up to 7.1.4) from LG, Samsung, Sony etc