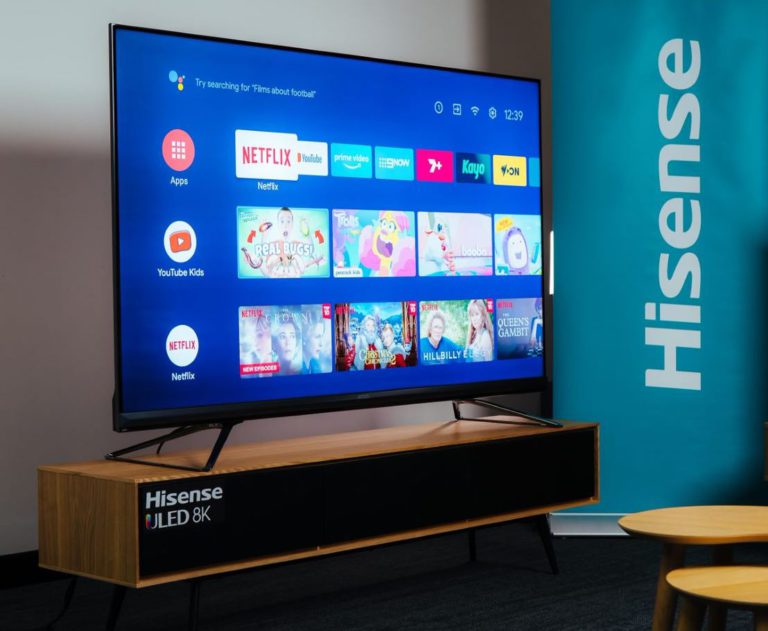 GadgetGuy has reviewed quite a few Hisense TVs since it became a serious player in the Australian market. The Hisense 8K ULED U80G TV is by far the best we have tested yet. It augers well for the rest of the 2021 4K ULED TV range as these share much of the same technology.

I need to qualify why we call it a first look – mini-review. Hisense reviews are usually in a city boardroom where light conditions are pretty perfect, and reviewers only get a few hours with the set. Sorry but that does not a review make!

Being 8K, we did not have the hardware and software testing tools so we can’t be entirely sure what standards the TV meets. Let’s say that the Hisense 8K ULED U80G TV aced all 4K tests – something that no other Hisense TV to date has been able to claim.

Also, there is not a lot of native 4K Dolby Vision (DV) and Dolby Atmos (DA) content apart from blockbuster movies.

The majority of video content will be SDR (standard dynamic range). Some will be HDR (high dynamic range). Very little will DV (the peak standard for HDR). A DV TV has a dedicated decoder chip that passes the video metadata to the TV processor to change settings on a frame-by-frame basis.

The majority of sound from free-to-air TV is PCM 1.0 (mono) or PCM 2.0 (stereo). Video streaming usually has Dolby Digital (up to 5.1 channels), and some have DTS (similar) surround sound. DA requires a dedicated decoder chip that down-mixes up to 132 sound channels to the TVs (usually) 2.0 stereo speakers. Or it can pass the spatial/height metadata to a Dolby Atmos soundbar via HDMI 2.1 and eARC. You can read more about DA in our one-page guide here.

My point is that the TV is only part of the equation to get great images and sound.  Before you rush out and buy 8K, consider that you can get a 4K OLED or Quantum Dot (QLED, NanoCell, ULED) and a terrific 7.1.4 soundbar with discrete rear speakers – and get change from $6999 (and you will need a soundbar for the 8K as well).

What is the upscaling? It is the heart of the matter

Upscaling is not too much of a stretch for a 4K TV. If it gets a 720p source, it wraps eight similar pixels around each original. It can even do a creditable job on old 480p 4:3 images, although that is a step too far. And 1080p to 4K –add three pixels – easy.

8K is far harder. Simple pixel wrapping does not work – all it does is blur the image.

It uses a mix of upscale techniques (we won’t repeat the various methods – they are here) and the result is at least as good as the 4K image presented on an 8K panel.

Another side benefit is that AI now recognises sport and games and can adjust the TV accordingly. Over time Hisense can release firmware updates to improve its on TV upscaling.

I can’t be effusive yet because I have not seen enough native 8K content or other 8K upscale brands to say it is as good. In my brief test, it seems a step up from 4K.

Big – 75” is large (1676 x 1088 x 424mm) but I understand it will be available in 65 and 85” too. The V-shaped desktop stand is not visually pleasing and requires quite some depth (approx. 500mm). Why? It is a big heavy screen (estimate approx. 40kg) for a desk stand to hold up and is better wall mounted. The stand can also interfere with a longer soundbar.

The bottom of the screen has a V-shaped ‘channel’ housing a 2.0 speaker system. Side and top bezels are small. The rear has a textured plastic cover and a hatch to get to the ports.

Again, it is hard to be effusive over a large black glass slab from any brand.

Backlight – the key to performance

Hisense does not release backlight specification nor the number of dimming zones. All it will say is that it uses banks (strips) of LEDs to provide full-array-local-dimming (FALD), has >100 dimming zones and >1000nits peak brightness to satisfy Dolby Vision requirements.

A standard Blue light LED (zone controllable) shines though LCD gates (to turn on and off the backlight) and then through the Quantum Dot Red, Green and Blue (ULED layer).

What are the DV requirements? Visually the picture must look like the moviemaker intended. That means it must interpret all sorts of metadata in the video and audio stream to adjust brightness, contrast, colour performance, sound and more on a ‘frame-by-frame’ basis.

Technically that means the panel must have at least a 200,000:1 contrast ratio, and 1000nits peak brightness (on a very small percentage of the screen) and most of the Rec 2020 colour gamut.

Note: We have asked Hisense to confirm these specs.

Perhaps my greatest criticism of all TVs brands is screen reflectivity of light from overhead, behind, side and even bouncing off viewers in their chairs. The key to glare reduction is a high-level anti-reflective panel coating and sufficient panel brightness to overcome ambient light.

Hisense claims that 98.5% of light (no angle specified) is absorbed and only 1.5% of light reflected, resulting in less glare. If this is the case that would be excellent for expansive Australian open plan living rooms.

However, the review unit was a pre-production model and was highly reflective. Hisense claims it won’t be an issue on the retail models. We can only suggest you check this out in the store before buying. In any case the cure is to fix your lighting first.

Hisense typically uses a VA (vertical alignment) LCD panel, which means lower viewing angles. It claims that it has 178° off-angle but is more like 130° horizontal and about 110° vertical. The latter means you need to be careful of the wall mount height. Don’t get me wrong – you can off-angle view far further but in my opinion its too much of a compromise.

Because pixels are more densely packed the ideal viewing distance for a 75” is 2-3 metres.

Equipped with Variable Refresh Rate (VRR) and AMD FreeSync technologies to reduce lag and shuttering during gameplay, HDMI 2.1 enables up to 8K pass through and Auto Low Latency Mode (ALLM) for gamers.

The panel is a native 100Hz with usual 200 Motion smoothing claims made by many manufacturers. Hisense claims it uses AI to enhance the standard smoothing methods of motion estimation, black frame insertion and object identification. Note the marketing may claim 240 smoothing – that is for countries with 60Hz mains power.

My tests were unable to verify the claims.

Hisense remains committed to its VIDAA OS but this runs on Android TV (10 and security patch 5/11/20) because its biggest market (US) demands that. Android TV has the largest range of apps.

The means Google Assistant and two far-field mics support hands-free mode – no need to push a button on the remote. My advice – turn off the mics in settings.

We can normally measure power use, but the boardroom test precludes this. Given FALD, high brightness, 8K and the processor needs to do an awful lot of work it will probably consume around 150Wh – similar to an OLED Panel.

How does the picture look?

Earlier I stated the Hisense 8K ULED U80G TV aced all 4K tests – something that no other Hisense TV to date has been able to claim. That is because I only have 4K tests and 4K content. The results then upscale to 8K.

One first and last impression was that it had the full gamut of colours (claim 8bit+2 FRC, one billion colours, 140% BT.709) and several pre-sets.

Now I want to pick up on a reader’s comment recently that Hisense TVs look duller than rival brands ‘out of the box’. And he is 100% right. Samsung always has punchy colours, LG has depth, Sony Tri-Luminous (Quantum Dot) is bright etc.

If you reset to factory defaults, it reverts to standard colour gamut and sound. Definitely not the best it can do. If you select Dynamic picture and Speech sound, you get that saturated image and clear voice that Australian’s love.

But the new simplified remote control does not have access to these pre-sets so it’s a manual thing done via settings. I think that is an oversight as the old remote could cycle through pre-sets.

It has a total of 15W for two mid-range and two tweeters (these use a frequency cut-over) and no woofer.

Maximum volume is 80dB (loud enough) with not a lot of harmonic distortion, so it will fill a large lounge room. It is bass and mid centric for movies although the treble range is harsh.

It can decode Dolby Atmos to its 2.0 speakers, but why bother? DA content adds no height nor spatial sound to stereo speakers despite any contrary vendor marketing claims.

But under no circumstances believe it can reproduce DA from the two speakers. You will need a decent DA soundbar, preferably a 7.1.4 with discrete rear speakers.

Regrettably, Hisense doesn’t have a suitable soundbar (we don’t know what is coming in 2021). GadgetGuy’s 2020 pick is LG SN11RG 7.1.4 (with separate rear forward-and-up-firing speakers). This is usually $1899 but is on run-out pricing at closer to $1190 with free delivery at Appliance Central.

All TVs and OS feed telemetry back to the maker, TV rating analytics, and in this case Google.

Android TV has various user-definable levels of privacy. Enabling Google Assistant and its ability to search multiple content providers means that the TVs knows what and when you are watching.

It will also work with Alexa – ditto.

GadgetGuy’s take – the best Hisense yet

To say it is the best Hisense yet is like Apple CEO Tim Cook’s broken record saying that this model of iPhone is the best yet. Of course, it is – no one sets out to make a worse model!

And that is how I feel about the Hisense 8K ULED U80G TV. I expect each year’s iteration to be a significant step up for the good, honest, well-priced TV brand. Hisense made its name here by challenging the main brands (LG, Samsung, and Sony) at a slightly lower price point.

The U80G may well be the final leveller – Hisense’s coming of age in Australia. Of course, we have not reviewed any of its 2021 4K ULED yet, but I understand that they all have FALD, HDMI 2.1/eARC and the Hi-View Engine Pro TV processor.

If you want to know more about TV tech, read our Techies Guide to TV here

Would I buy the Hisense 8K ULED U80G TV?

It is too early to tell because COVID has meant we have not seen the other 2021 models from the majors. It is certainly one of the best Quantum Dot pictures I have seen (compared to 2020 models). But ULED is quite a way from the picture perfection of OLED, and we are yet to see any mini-or-micro LED TVs either.

So, I won’t make a recommendation just yet. I think its value for money equation will be hard to beat, and it appears there are no downsides to this TV.

Its Hisense's bet yet and shows that the 2021 ULED range has come of age
Features
9
Value for money
9.5
Performance
9.5
Ease of use
9
Design
8.5
Positives
2021 ULED technology is a step up
8K AI upscale is quite good
Should be great value
Android TV OS
Negatives
None really but I have little 8K experience to draw on
9.1
Great 8K value