How to turn any fridge into an Internet fridge 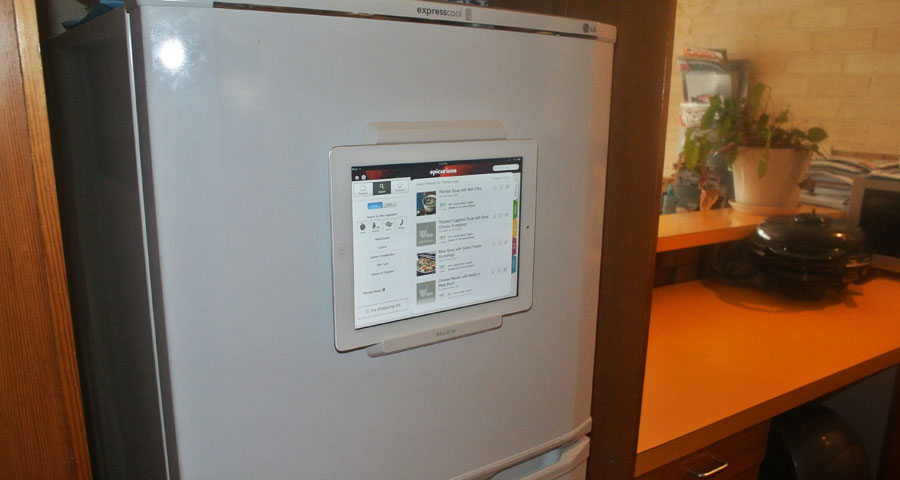 LG’s internet refrigerator wasn’t the huge success the company expected,  but accessory maker Belkin has come up with a new way to skin the same cat: a gadget that can – with the help of an iPad 2 – turn any fridge into something more web friendly.

The Belkin Wall Mount is an iPad 2 accessory made specifically for the iPad 2, designed to take advantage of the magnets used for attaching Apple’s Smart Covers.

With the Wall Mount installed, you’re ready to ‘activate’ your internet fridge – so just to grab your iPad, remove it from any case you’ve got it in, and slide it into the mount.

With the Belkin iPad 2 Wall Mount attached, our fridge – which is, coincidentally, an LG – now has net access. When we’re in our kitchen, we can  read recipes, surf the web, watch YouTube, all without leaving the cooking area.

We loaded the free Epicurious app to turn our fridge-mounted iPad into a recipe guide, and found is quite effective for providing step-by-step instructions for cooking, as well as a huge selection of recipes.

There’s more stability here in the Wall Mount than we expected too, though we’d recommend against slamming the fridge or freezer door when the tablet is attached.

One thing the Belkin mount lacks is protection  from your food-laden fingers.  If you want to keep the iPad’s touchscreen gloop-free, consider keeping a capacitive stylus in the kitchen so you can use the iPad  without having to touch it with your fingers. If you can find a magnetic stylus, even better.

It should be noted that adding an iPad to your fridge doesn’t technically make it a “smart” fridge, especially not in the way that LG uses the term.

At the Consumer Electronics Show in Las Vegas this year, LG announced plans to release a new version of the smart fridge with support for the internet and the ability to track how much food was inside the refrigerator.

While we’re not sure how much this new model will cost, we can almost guarantee that it will still set you back a lot more than a Belkin Wall Mount and iPad 2.