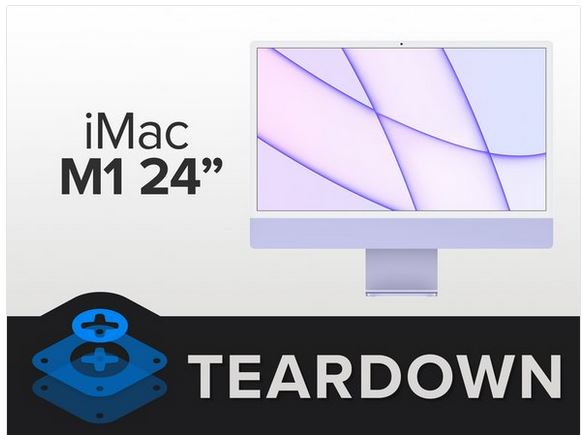 iFixit has completed the iMac M1 24″ teardown and revealed the secrets of an incredibly thin 24″ computer – some impressive engineering, a tiny M1 ARM motherboard and display board at the top.

Of course, with that engineering comes a lack of repairability with everything soldered to the motherboard earning it a 2/10.

The iMac is perhaps Apple’s most iconic all-in-one computing device. The Mac bit is short for Macintosh from the late 90s. Since 2004 it has had a unibody on a cantilevered stand.

The reality is that it has morphed from an Intel-based x86 CPU to Apple’s M1 ARM chip and, in doing so, allowed thinner designs. The downside is you can’t upgrade what you buy.

There are two M1 chips – the standard has eight computing cores and a seven-core GPU. The ‘deluxe’ has an eight-core GPU.

Back to the iFixit unhinges, the iMac M1 24″ teardown

The complete teardown is here. Below are some highlights.

The motherboard is similar to that used in the MacBook M1 air with two fans and heatsinks. Everything is soldered on; repair or upgrade is impossible.

The stereo speakers – impossibly thin – have a full-range speaker and a tweeter.

If you plan to VESA mount – order it that way as the stand is not easily removable.

By far the biggest’ complaint’ is about upgradability. But I suspect that this comes from people who don’t understand docking stations (Thunderbolt 3 or 4 – 40Gbps data transfer) that can support external SSDs and peripherals at impressive speeds. And while the M1 chip architecture only supports a maximum of 16GB if the M1 macOS is anything like iOS (its iPhone 12/Max only has 4.6GB), the ARM OS needs less ram than X86.

You can read more about the Apple M1 chip here.