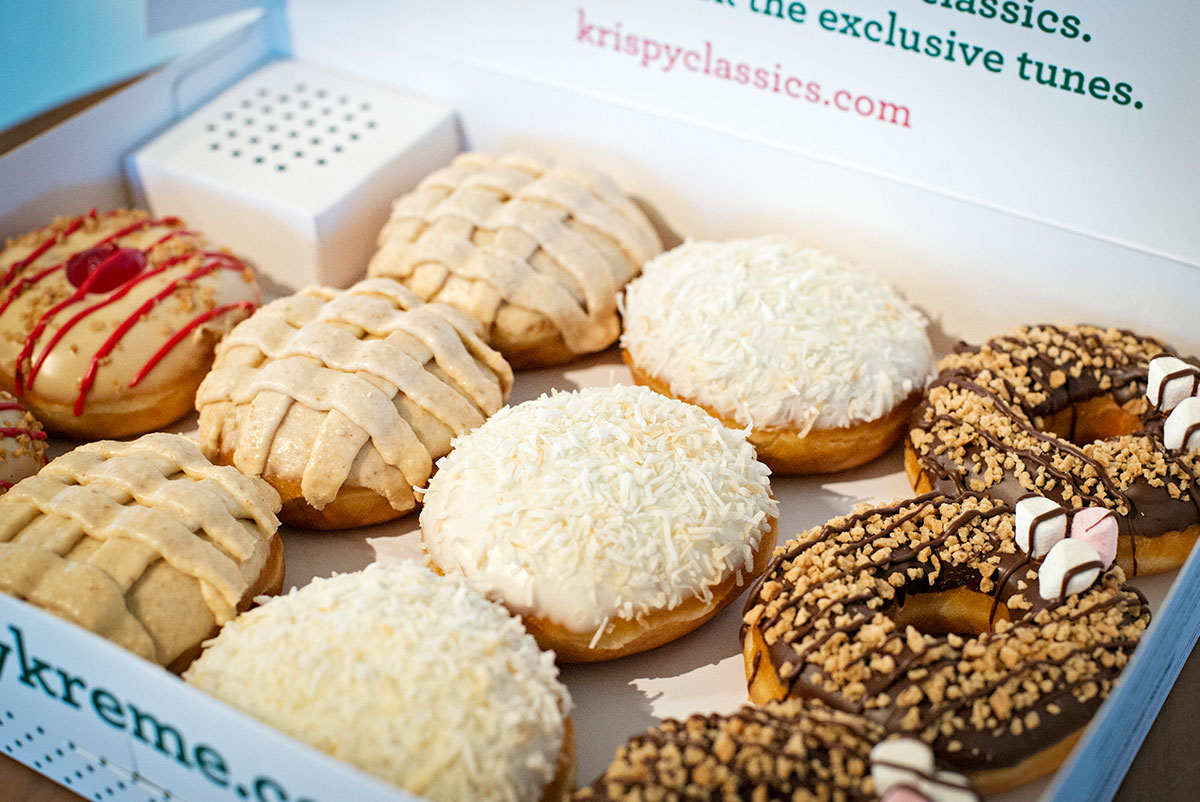 We’re not sure if doughnuts will survive the test of time, but if you’re keen to relive the 50s with something tasty, the maker of very sweet pastries has a gadget lined with them.

As part of a doughnut releasing stunt, Krispy Kreme is asking people with a sweet tooth to relive the glory days of American classic music, and it is doing so with doughnuts inspired by those days.

There’s definitely an American theme to these, with a peanut butter and jelly doughnut, a coconut cream pie, an apple pie, and one made to feel like the chocolate s’mores kids in American schools get on camping trips with chocolate and marshmallows.

After eating two, we needed a nap, but chose instead to explore the small box inside the Krispy Kreme dozen that makes up the jukebox.

This little box takes up one spot of the dozen doughnuts — meaning that yes, you only get 11 doughnuts in the special jukebox edition — and includes a speaker out the back, complete with a cutout in the doughnut box itself for powering the speaker and plugging in 3.5mm audio.

Outside of the new doughnut varieties, this is pretty much the reason to look at this box, because you get a speaker in the box that you can send actual music to, and for that, Krispy Kreme has even put its thinking cap on and come up with some classic playlists on Spotify, as well as some doughnut-themed tracks inspired by the old music.

“Our inspiration behind the four new flavours was American vintage with a modern twist,” said Andrew McGuigan, CEO of Krispy Kreme in Australia.

“We’ve been working with songwriters and Spotify to make sure it’s not only the taste buds which are in for a treat…but the ears too. You can not only taste the Classics, but hear them as well!”

While the gimmick is cute, it is a gimmick that will only be available in select varieties, with Krispy Kreme planning to give them away to people as part of a competition.

That unfortunately means you can’t buy the speaker-ready box, though you might be able to win one. The doughnuts, however, are what Krispy Kreme wants you to focus on, and they’re available as part of a typical dozen from the stores now for $27.

Good luck resisting a nap after eating one.