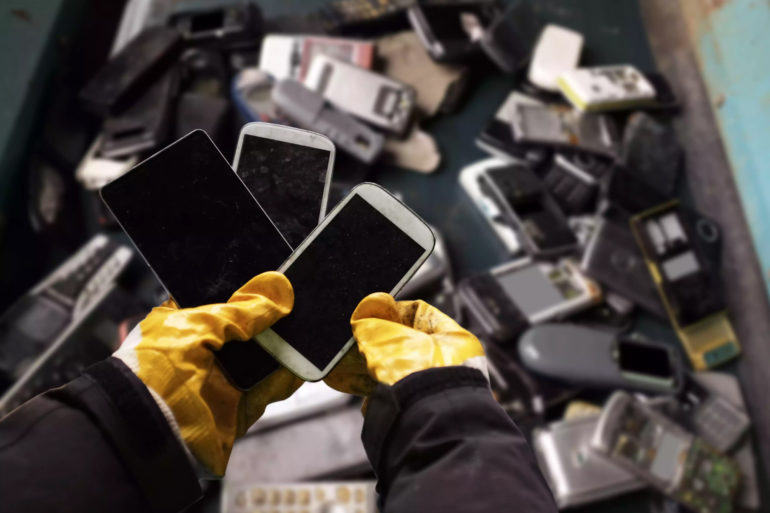 Australia is the fifth most wasteful country when it comes to technology. The Productivity Commission is considering making it easier to turn Australia’s eTrash into treasure. Part of that is ‘right to repair’ – fixing devices fixed rather than throwing them away.

The average Australian produces 21.7 kg of electronic waste each year. This is more than people in technology-loving countries like the US, Hong Kong and Japan. Norway is the world’s worst offender at 26 kg per person per year. This figure may be high partly because of its high regulation of e-waste disposal.

There are some initiatives in Australia, such as the Mobile Muster program to turn e-trash into treasure by refurbishing or recycling. While it’s a step in the right direction, it’s only a drop in the ocean.

The size of the global electronic waste problem is difficult to comprehend. The world produced an average of 140,000 metric tons of electronic waste every single day in 2019. This includes computers, mobile phones, tablets and other electronic products with a battery or plug.

If all that waste was made up entirely of dead iPhone 11s, they could rebuild the Taj Mahal.

Recycling is just one answer to the world’s e-waste problem. Unfortunately most electronic waste doesn’t have a happy ending.

Only 17.4 per cent of the world’s e-waste was “officially documented as properly collected and recycled” as of 2019, according to the Global E-waste Monitor 2020.

Another issue is that e-waste is not distributed equally. Components such as precious metals and minerals are sourced from low-income countries. Devices are manufactured in developing countries, after which consumers use and dispose of them in western and high-income Asian countries.

Finally, manufacturers and authorities send devices back to low-income and newly emerging economies, including China and India, to be recycled for the benefit of the planet. At least in theory.

“A substantial proportion of e-waste exports go to countries outside Europe, including west African countries,” according to Interpol. “Treatment in these countries usually occurs in the informal sector, causing significant environmental pollution and health risks for local populations.”

Recycling can also be an energy-intensive process which further offsets the environmental benefits.

The Right to Repair movement is pushing for manufacturers to create goods that are easy to fix, not discard. They also want manufacturers to make it easier for repairers to access parts and schematics, especially after a product’s warranty expires.

The technology giants have pushed back. Across the US, 25 states have considered Right to Repair legislation. Microsoft, Apple, Google and Amazon have lobbied against various attempts to introduce Right to Repair laws in various states.

It seems the writing is on the wall. According to Bloomberg, the US Biden administration is reportedly preparing to compel the Federal Trade Commission to draft new rules potentially enshrining people’s ability to repair their own gadgets in law.

Pundits expect the Executive Order to specifically mention the repairability of mobile phones. It also extends to other machines which are software-locked to prevent unauthorised servicing and repair.

Meanwhile, the United Kingdom recently introduced Right to Repair laws. They cover appliances such as televisions and washing machines. Surprisingly, they overlook other consumer electronics such as smartphones, tablets and laptops.

The European Union requires manufacturers to provide repair manuals and make spare parts available for up to ten years. The design of devices must enable easy repair and dismantling.

The Australian Productivity Commission’s recent review of Right to Repair efforts received more than 300 submissions and comments. It is currently seeking submissions to its draft report, which close on Friday 23 July 2021.

Its draft report found that mobile phones, cars and agricultural machinery are the three main categories where third-party repair is becoming harder. The most common complaints revolved around smartphones, such as the difficulty in repairing screens or replacing batteries. The high cost of replacement parts also often made repairs impractical.

It also calls for a ban on warranty seal stickers in Australia. Warranties should specify that consumers do not need to use an authorised repairer to retain their rights under Australian consumer law.

Gadget makers have hampered Right to Repair initiatives for far too long. The tide of public opinion is turning, forcing them to improve their environment credentials. This should extend to pressuring them into making it easier to repair devices, rather than seeing them thrown them on the scrap heap so they can sell us a new one.