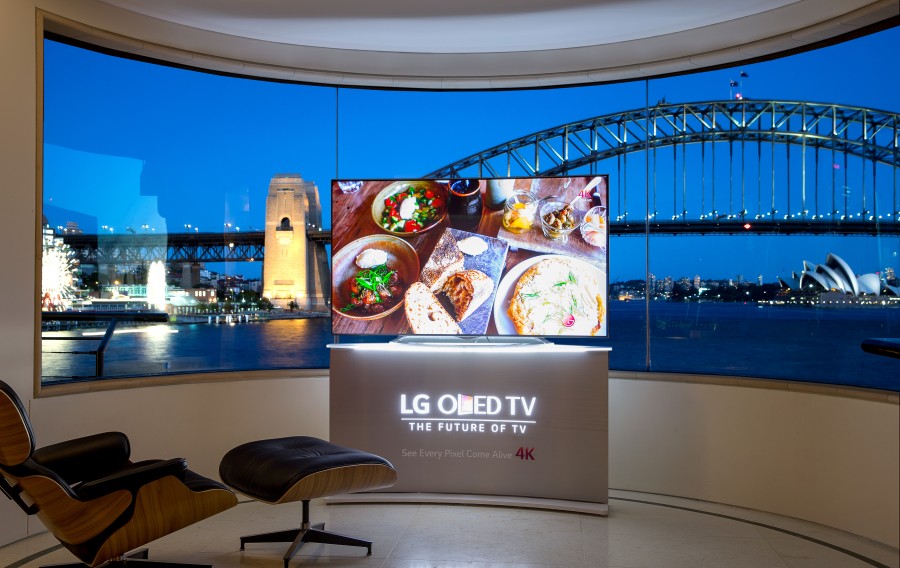 The reality for most consumers, however, is that picture performance is just one factor in the buying decision process.

While LG’s suite of Smart TV features, inclusive of video on-demand apps, pointer-style Magic Remote and useful WebOS interface, which overlays menus at the bottom of the screen, help round out the case for the 65EC970T, cost is an obstacle.

At a smidge under $10,000, the 65 inch UHD OLED is more than twice the cost of LG’s Full HD curved 55 inch OLED TV (55EC930T). The TV, which was also installed in LG’s harbourside apartment, now lists for $3999 and, in the absence of UHD content, presents the value choice for enjoying Blu-ray and other Full HD content at its best.

The LCD TV technology  that dominates living rooms today is arguably at the peak of its development. Picture quality has never been better, yet it does not match the colour vibrancy, contrast ratios or motion performance of new OLED technology. LG’s 65EC970T OLED shows just how good visual entertainment at home can be.

So OLED is indeed exciting technology, and it’s just starting its journey with consumers. Currently the biggest hurdle it needs to overcome is price. While ‘value’ is subjective of course, at $9999 LG’s 65 inch UHD OLED TV is simply out of reach for most consumers. For now. LG’s first 55 inch OLED TV debuted in 2013 for $12,999, three times more than its current 55 inch model. So prices will fall.

Incidentally, the LG apartment the 65 inch UHD OLED called home for a week, was, as it happens, almost directly opposite the building where this writer saw the very first plasma television introduced in Australia.

Made by Philips, it was 32 inches, standard definition, required an outboard tuner box to receive broadcasts and accept inputs, and cost $24,000.

All of which makes LG’s 65 inch curved UHD OLED TV look like a bargain.