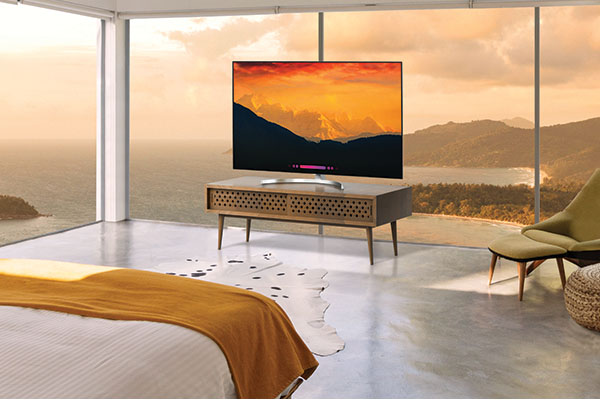 If I may quote a recent review: “Let’s be clear, OLED is the best TV tech available today. And LG is the source of OLED.” But if you can’t afford OLED, what about LG’s “Super UHD” range. Let’s dig into the LG 65SK8500 Super UHD TV from that range.

The screen is the same size as that of the OLED, and virtually all the facilities and features are identical. Except that there’s a Super UHD panel instead of an OLED panel. And there’s a recommended retail price of $4,799 rather than the OLED TV’s $6,399. That’s quite the saving.

There is one more difference. The OLED TVs include LG’s latest picture processor, the Alpha9. This TV scores the Alpha7.

So what is a Super UHD panel? Basically, it’s an LCD panel with LED backlighting, but with an additional wrinkle. LG calls it “Nano Cell Technology”. TVs create colour by combining red, green and blue dots. LCD dots aren’t coloured; they are white, black or some level of grey in between. They are turned into red, green or blue with colour filters over them.

Colour filters are imperfect. A green filter will let through a very small amount of light that looks to us more red than green. And vice versa. Likewise for green and blue. And vice versa. (But not for blue and red. Nor vice versa. They are at opposite ends of the visible spectrum.)

It seems that LG’s Nano Cell Technology absorbs some of the overlap between red and green, creating primary colours which are purer. Then, by combining them intentionally rather than accidentally through leakage, a greater range of colours can be created.

Now the main advantage of OLED over LCD/LED TVs is that OLED does black perfectly, LCD/LED doesn’t. That’s because LCD panels can’t entirely block the light coming from the LEDs in the backlight. Years ago makers started addressing this by putting an array – a grid if you like – of backlights behind the LCD panel. The picture processor controls each element of the grid. In any darker parts of the picture, they could be turned down. This was typically called something like Local Area Dimming.

Then TV styles changed, and premium TVs had to be thin, so the business moved to edge lighting, which allowed thinner panels. Many still had some form of Local Area Dimming, but it was less precise.

Lately, there has been a trend back to a good array of lights behind the panel. And that’s what the LG 65SK8500 TV incorporates. LG calls it “Full Array Dimming”.

The resolution of the panel is UltraHD, which is to say 3840 by 2160 pixels, or around 8.3 million pixels. What’s the resolution of the LED array behind the panel? I saw a press release for a different brand of TV just yesterday which boasted of a local dimming array of more than five thousand zones. There’s no official information about the number of zones offered by the LG 65SK8500 TV. We do know that it isn’t the best on offer from LG because the company has released a higher (costing $200 more) model which seems to differ only by including “Full Array Dimming Pro”.

But you can estimate the size of the grid by displaying an image that is fully black, except for a couple of bright pixels. And then seeing where the blackness glows. I estimate the grid as having four lighting zones across by eight up and down, for a total of 32.

The black levels of this TV are pretty good. But that local dimming isn’t really very local, so there was quite often a visible halo of relative brightness around moving bright objects on dark backgrounds.

If deep, dark blacks are vital to you, save up the extra money and go OLED. Where this TV excels is at the other end of the scale. That is, it creates a wonderfully bright and bold picture. It’s noticeably brighter than OLED. If your viewing tends to be under fairly bright room lights, you’re going to enjoy this TV more than an OLED.

The TV supports almost all the highest standards for picture quality. That includes UltraHD of course, along with HDR, Dolby Vision and Hybrid Log Gamma. They are all ways of increasing both the range from dark to light and the subtlety of the graduations along that scale. Not supported is the new HDR+, which is largely the brain-child of rival Samsung and is being used only by Amazon Prime.

This does not mean that it won’t work with Amazon Prime. The TV will likely just treat such content as standard HDR. The difference between HDR and HDR+ is that the latter includes metadata which can allow the scale to be shifted scene by scene. UltraHD Blu-ray discs almost universally use either HDR or Dolby Vision.

The TV handles the latest colour standards, especially BT.2020 which is used by UltraHD Blu-ray.

In fact, in every way apart from my slight reservations about the localised black levels, the picture performance of this TV was superb. And as I say, if the room lights are on, it’s a bit better than OLED.

If you’re watching regular TV, you can plug a disk drive into one of the USB sockets to time shift or pause live TV.

LG continues to have the best interface on its smart TVs, thanks to the radio-connected, motion sensitive remote control. You use the remote like a pointer, moving the arrow on screen to select things. LG’s main menu is a pop-up bar or ribbon across the bottom of the screen. You can re-arrange the items so the ones you use most are handy.

There are both Netflix and Amazon keys on the remote for quick access to those streaming services. But you can also access Stan, catch-up TV services, YouTube and Vimeo.

The LG 65SK8500 TV supports DLNA network connections, so you can cast network media to it. Wirelessly, too, since the TV has dual-band Wi-Fi built in. It does not support Chromecast.

The TV played just about all video and audio formats I had available, including UltraHD ones. The TV displayed photos at the highest possible resolution.

And you can use your voice for doing that asking. The remote has a microphone for capturing commands. Some commands can be useful, getting you into the settings menu faster than you can get there in the conventional way. Others, not so much. It’s much more reliable to press the Volume Up key on the remote than to press the microphone key and say “Volume Up”.

The TV sounds okay for a TV. The main problem is lack of space for large speakers. That’s a problem it shares with just about all TVs. Still, it has two-way speakers and 40 watts of total power.

But it also has optical and analogue audio outputs, so you’re going to get far better sound with just about any external audio system. Better still, you can use the ARC – Audio Return Channel – feature on most modern soundbars or home theatre receivers to feed the sound back to a higher quality audio system through the HDMI connection.

The TV has an energy rating of 5 stars. The maximum thickness of the panel is 62.5mm.

The LG 65SK8500 TV is a fine TV, capable of delivering a wonderfully bold image, especially in a bright environment. Its smarts remain amongst the best, mainly through ease of control. And it’s a lot cheaper than OLED.