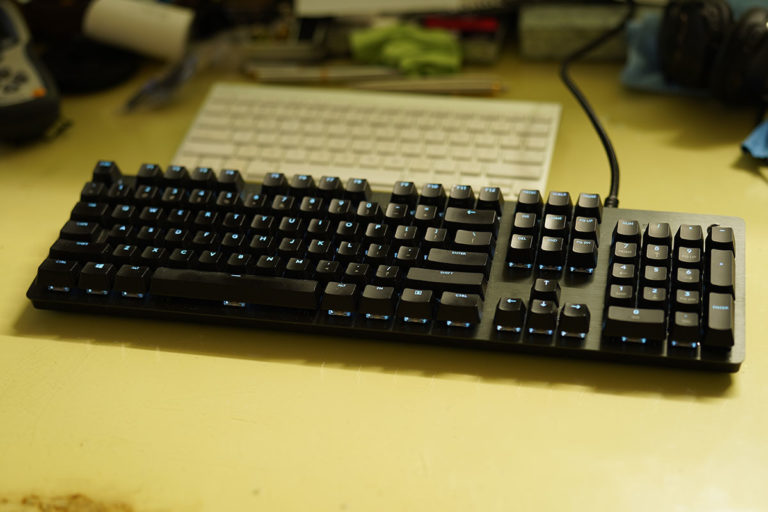 I’m ever on the prowl for the perfect keyboard. For me, that’s one that feels great under my fingers and so far, Logitech gaming keyboards have been just the thing. This time, I’m rapping the knuckles over the Logitech G512 Carbon with the GX Brown Tactile actuators.

All about the Logitech G512 Carbon gaming keyboard

The Logitech G512 Carbon gaming keyboard is, as the name suggests a keyboard especially designed for gaming. Logitech has a whole bunch of these under its Logitech G brand, priced from $129.95 through to $379.95. Most have backlit keys. Most are wired. Most use “mechanical” keys. All three characteristics apply to the Logitech G512 Carbon.

Wireless keyboards have their place, and Logitech’s system uses its own “unified receiver” rather than Bluetooth, so they are aren’t subject to Bluetooth’s latency. Logitech’s wireless gaming keyboards claim a 1 millisecond performance. Nonetheless, a wired connection is going to be even faster. And of course, there are no worries about replacing or charging batteries, especially since the keys are backlit and thus draw more power than a regular keyboard.

All keyboards use mechanical keys, of course, but these keyboards used properly constructed switches, spring-loaded and sealed in small modules, not mere bubbles in a flexible surface.

I guess the key illumination could be regarded as a gimmick, but its certainly a fun, stylish and sometimes very useful gimmick (think, dark rooms). Unlike the G413 Carbon we reviewed a couple of years ago, but like the G810 Orion Spectrum we reviewed even earlier, the Logitech G512 Carbon has a full RGB set of LEDs. The Logitech G Hub software configures the lights. The software can set the colour and brightness of your choice, or invoke various rainbow effects, both static and moving.

The keyboard includes an additional cable for plugging into a USB socket on your computer. It makes a USB 2.0 connection available on the back of the keyboard for any peripherals that you may have.

The Logitech G512 Carbon keyboard is faced with a sturdy aluminium/magnesium alloy. The keys aren’t set in – they stand proudly above the surface. The body is just a little larger than the space required for the keys. Unlike some other Logitech gaming keyboards, there aren’t any extra keys, just the usual ones you’d find on any Windows keyboard.

Except, that is, for a “Fn” key to the right of the right-hand “Alt” key. Hold that down to access eleven additional controls on the keys from “F5” to “Pause”. They control music playback, adjust the level of the backlighting and invoke “Games” mode. By default, games mode disables a few keys on the bottom row, such as the Windows key. Those keys just get in the way when you’re playing games. You can use the G Hub software to eliminate more keys and make profiles suitable for different scenarios.

Using that software, you can also create macros, assign functions to keys and all kinds of stuff for those seeking to extract maximum gaming productivity from their keyboard.

The Logitech G512 Carbon keyboard is available in five different versions. All five are identical except for the mechanical key mechanisms. The options are:

The differences between Switch, Tactile and Linear are feel. The GX Blue Switch has an “audible click” and requires 60 grams of force to get it past a “tactile point” before it operates. The Red Linear requires a smoothly increasing force and is relatively quiet. The GX Brown Tactile is also relatively quiet but has a 60g “tactile point” like the GX Blue. I will return to all this in another review soon, where I will be looking at the Logitech Pro X keyboard along with the Pro X Switch Kits which allows you to replace all the key mechanisms.

Meanwhile, the review Logitech G512 Carbon used the GX Brown Tactile switches. Logitech says that the “GX Brown switches offer minimal feedback through actuation to ensure confidence and precision in the actuation moment – without being too loud or distracting. Tactile switches are ideal for competitive and FPS gaming.”

Logitech G512 Carbon in use

I am not a gamer. I am writer who spends all day everyday bashing out words on a keyboard. This Logitech G512 keyboard felt great. In recent months I’ve been using the G413 (which is still available) and which uses the Romer-G Tactile switches. Both might be Tactile, but there was still quite a difference in feel. I can’t say that the slightly heavier, longer-throw GX Brown Tactile switches were any harder to use, just different. I’d like to say that I preferred one over the other, but in fact I soon accustomed myself to both and both felt excellent. Solid. Certain. Smooth. Never any bounce.

Previously I’d been using the G810 and I think it employed the Romer-G Linear mechanisms. It lacks a higher “Tactile” point before the actuation point. Sometimes I’d stop and think about what I’m writing, leaving my fingers resting lightly on the keyboard, and notice a row of “f”s or “g”s auto-repeating their way across the screen. That never happened with the Logitech G512 Carbon keyboard. The very slightly longer throw and the heavier press required due to the tactile point seemed to prevent that.

But there was one clear weakness with this keyboard, plus one design point that I found confusing.  Unlike the earlier Logitech keyboards I’ve mentioned, the backlighting only illuminates the main character on each key. So the letter “6” is lit, but not the shift-character “^”, likewise for “4” and “$”, “9” and “(“, etc. I found it hard to see the secondary functions on the function keys because they are not illuminated, and the markings are on the front of the keys which is generally shaded by the overall keyboard design. The backlighting seems to be a limitation of the GX switches. The Romer G switches have a hole at their centre for the backlight. The GX switches have their actuating rod at the centre, so the LED is above it. The light can’t get to the bottom half of the key.

The thing I found confusing was the position of the markings on the keys. On a normal keyboard you have, say, the “6” on the bottom of the key and the shift character “^” above it. This is reversed on the Logitech G512 Carbon keyboard. The numbers are at the top and the dollar signs and ampersands and asterisks are underneath them. Trivial I guess, but it slowed me down. I’m a pretty fair touch typist, but that does not extend to the non-alphabetic characters. I need to look at the keyboard for them. The inverse positioning and the lack of backlighting had me searching for the right keys more than I’m used to.

… and definitely great for typing. I will get used to that lettering thing. I gather that if you can get hold of the one of the Logitech G512 Carbon keyboards with the Romer-G switches, it does illuminate the both characters and the markings are the right way around.