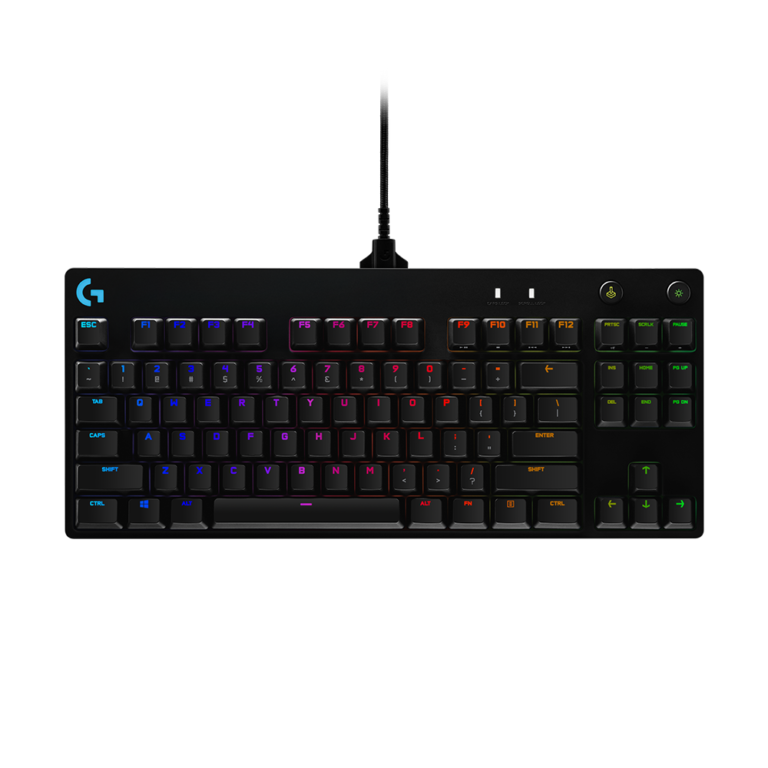 Are you familiar with the work “Tenkeyless”? I wasn’t, until I started looking into several of Logitech’s latest gaming keyboards. It means keyboards without the block of numbers, and related keys, at the right-hand end of the keyboard. That makes for a more compact keyboard. But that’s just the most obvious of the things that set the Logitech Pro X keyboard apart.

About the Logitech Pro X

In many ways, the Logitech Pro X is similar to the Logitech G512 keyboard which we recently reviewed. It has similar key mechanisms – more on that soon – but again the main difference is the omission of the numeric keys on the right-hand end of the board.

If you’re an accountant, bookkeeper or engineer, you should get a G512. You’ll miss those keys (as I did, a little, while preparing for my quarterly goods and services tax statement). But for many others, especially gamers, losing the number keys delivers a positive performance advantage. If you’re a rightie, your mouse will be closer to hand than with a full-width keyboard.

In many ways this keyboard is similar to the G512. It’s wired, not wireless. The keys stand proudly up, they’re multi-colour backlit and you have exceptional control over the lighting using the Logitech G Hub software. And it uses GX key switches. I’ll come back to those shortly.

What it doesn’t have is the USB socket and seems to be built of a nicely solid plastic or ABS, not metal alloy.

Like the G512, the Logitech Pro X has the main character markings on the keys at the top and these are backlit. The secondary characters – “&” which you get with Shift-7, for example – are printed underneath the main characters and are not backlit. Because they are printed in a medium grey colour, they are hard to read. That’s doubly the case for the seven “FN”-shift functions of the keys from F9 to PAUSE. These are for controlling media. Best to memorise their functions because the markings on the leading edge of the keys are qujite hard to make out.

Clicks and feels and linearity – three types of keys

You can order the Logitech Pro X with your choice from among three different key mechanisms. All are mechanical, using GX switches. The choices are

Logitech supplied me with the keyboard with GX Blue Clicky keys installed. But they also provided Switch Kits for the other two kinds. Each Switch Kit includes 92 replacement switches and a plastic grabbing tool you can used to get the keys and switches out. Since there are 87 keys on the Logitech Pro X, there are a few spares.

The keyboard has two control buttons as well as the 87 keys. One toggles between backlight on and off, and one toggles gaming mode on and off. Gaming mode disables certain keys. By default, it disables the two Windows keys and the “FN” key, but you can specify any other keys that you wish. The idea is that certain keys just get in the way of effective games play. (Hit the Windows key, for example, and it’ll pop up the main Windows menu over your game.) You can save multiple profiles in the G Hub software, so if you have different key-killing requirements for different games (and different lighting setups, and different programmed macros) you can have different profiles for each of them.

The GX Blue Clicky keys were the ones installed on the keyboard as delivered. These felt excellent. The “click” was certainly present, but tended to be drowned out by the sound of the keys bottoming. Perhaps that was due to my heavy-handedness in typing.

When I typed more gently, the click point seemed to coincide with the “Tactile” point, and both seemed to be just a couple of tenths of a millimetre above the actuation point at 2mm. I found it impossible to click without producing a character on screen. Not that you’d want to. I’m merely trying to describe the feel here.

Initially the space bar felt a little soft and giving compared to the character keys. That may have been due to its width (the switch is in the middle, but there are two spring-loaded supports at either end), or possibly a little more give in body of the keyboard towards the middle.

It took me about over an hour to change the keyboard from one type of switch to another. It’s an exacting process, and I managed to get a least one key wrong – it is the only one which failed to work. Pulling off the key and switch again, I found that through some accidental misalignment, I’d managed to bend one of the terminals over. A quite straighten with a pair of pliers, followed by a reinsertion and all was fine.

After I’d completed the changeover a small number of the keys tended to double-register. That is, you’d hit the key and its character would appear twice. This was particularly problematic when I tried to enter my password to open up a secret document on my computer. One false entry is not uncommon. I almost never make two failed attempts. And three?

I had another (Logitech) keyboard plugged into the computer so I could use that to log on. Then I used both keyboards to type the password into a text document. The other keyboard was fine. The Logitech Pro X with the switched keys consistently repeated one of the numeric characters. There were about three keys overall with this behaviour. For two of them, I just changed the switch to one of the spares. For the third I pulled the key, made sure it was clean at the back, made sure the switch was clean on the top, and then reset it in place with car. After that, it worked fine.

That probably would have worked with the other two as well: moral, just be careful.

The feel of the GX Red Linear keys was surprisingly different to the clicky ones. The keys simply descended smoothly to the key stop, and there they stopped firmly, with no give or feeling of wishy-washiness.

For fast, regular typing, this was my favourite. It was a little quieter, a little smoother, a little easier than the other two.

But it had one potential weakness: it was almost impossible to press the key in a little and pause on the cusp of triggering it. The click of the Blue and the point of maximum tactile resistance of the Brown do give you enough feedback for you to hover there until ready to complete the stroke. Not so with the GX Red Linear.

I can’t really think of too many circumstances where this kind of control would be needed, but if it applies to you, take heed. It also meant that with the Linear keys installed, the keyboard was more likely to end up auto-repeating a long line of characters when I left my fingers resting on the keyboard.

I went pretty much into the feel of the GX Brown keys when reviewing the G512 Carbon keyboard. The difference from the Red keys was a little subtle, but there was that slight catch just before actuation. That involved applying a little more force and tended to prevent accidental triggering of keys when resting hands.

Oh golly, which did I prefer? I’m thinking the GX Brown Tactile, in the end. You? Ideally you should find a dealer who carries them all and try them out.

Whichever one, they are all a world apart from the typical keyboard with which most desktop computers are equipped. Apart, that is, in the sense of way, way better.

Gadgetguy’s Take – If you don’t need to enter number, the Logitech Pro X is great.

If we can judge by the Logitech website, it seems that the Pro X Switch Kits are no longer available. No matter, you can still buy the Logitech Pro X keyboard with your choice of keys. It’s not like you’ll be wanting to change keys from application to application. Or able to, given the hour it takes to achieve the switch.

So choose the key feel that you want. The only thing remaining this to consider is whether you’ll miss the numeric keypad. If you’re not a numbers person, chances are you won’t. On those occasions when you do need to key in some figures, you can just use those in the main part of the keypad. Finally, if you want your numbers and would prefer to clearly see all the markings on your keys – and don’t mind red backlights – consider the Logitech Carbon G413. It’s a ripper and quite a bit cheaper. It has been around for at least three years, so it may not be available for much longer.

Features
Value for money
Performance
Ease of use
Design
A great typing experience with superb feel
Your choice of key feel
Highly configurable
Some key labelling hard to see
4.7