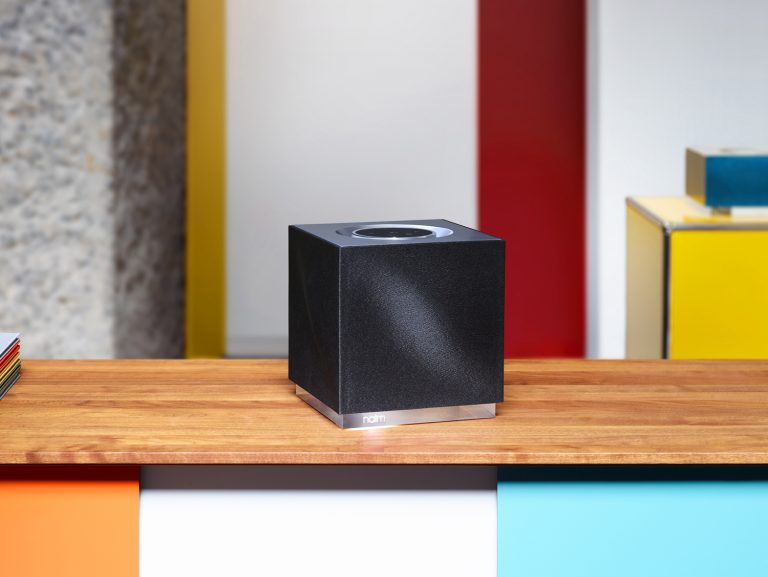 At GadgetGuy HQ, we encounter a lot of wireless speakers… but not many from hi-fi names that are equal parts passion and prestige.

British audiophile marque NAIM Audio has earned cred as a maker of premium audio components, notably reference-level pre and power amplifiers. The company runs its own independent record label, and has designed the audio systems for Bentley cars since 2008.

The Mu-so Qb we’re going hands-on with here is the second iteration of NAIM’s Mu-so line, and though it’s smaller and cheaper than its predecessor,  be careful not to get too excited. In the rarified world of hi-fi, ‘cheaper’  is still a long way from cheap. So how much?

At a whopping $1295 the Mu-so Qb is around twice as much as premium wireless speakers from the likes of B&W, Sonos and Bose.

Engineered in the UK, the Mu-so Qb is beautifully a designed cube-shaped speaker (around 20cm), with an acrylic base, metal chassis and a solid aluminium controller. It’s a welcome change from the plastic boom box approach taken by most wireless speaker makers. The touch wheel controller on the top face is slick and satisfying in operation, and totally complementary to the unit’s top-shelf positioning.

A black, acoustically transparent grille wraps around the Mu-so Qb, and you can choose to leave it on or remove it from its magnetic grips. Doing so reveals a Salvador Dali-esque arrangement of drivers, including two angled midranges, a pair of angled tweeters, plus woofer for bass.

The Mu-so can stream music over your home WiFi network, so you can share files from digital sources such as phones, tablets and PCs without running cables around the house. You can spread the music more widely and create a multi-room audio system by connecting up to five Mu-so Qb speakers (or mix it up with Mu-so models) around your home, with control of what plays where via the NAIM app.

Available for iPhone and Android, the app seems a bit basic compared to that of the Sonos system, which sets the benchmark in this category, but it gets the job done. Network streaming trails the latest WiFi standards, with support only up to 802.11g.

You can also stream from directly from music devices via Bluetooth (aptx supported), Spotify Connect and AirPlay, or use a cable connection to the Mu-so Qb’s 3.5mm headphone jack for connecting legacy sources like CD players and MP3 players.  There’s a digital input,  USB port and compatibility with hi-res audio files.

We were mightily impressed by the Mu-so Qb during our short time with it.

We tested tracks from Miles Davis, as well as Beethoven’s No 5, and the sound was close to faultless, with a good levels of depth and nuance. Modern music from the likes Radiohead and Muse was reproduced excellently too, with balance and dynamics more like what we’d expect from high-end bookshelfs – though obviously lacking the stereo separation you get from a discreet pair of speakers.

When called for, the bass has lots of meatiness, without too much compromise on detail in the mid range and treble.

There are wireless speakers that offer better value, of course, but that’s not really the reason you should consider the Mu-so Qb for your musical life. For a compact speaker, it goes plenty loud, with little trade-off in finesse. It looks amazing, offers incredible build quality and, positioned in your home, conveys a sense of eclectic good taste to all who care about such things.