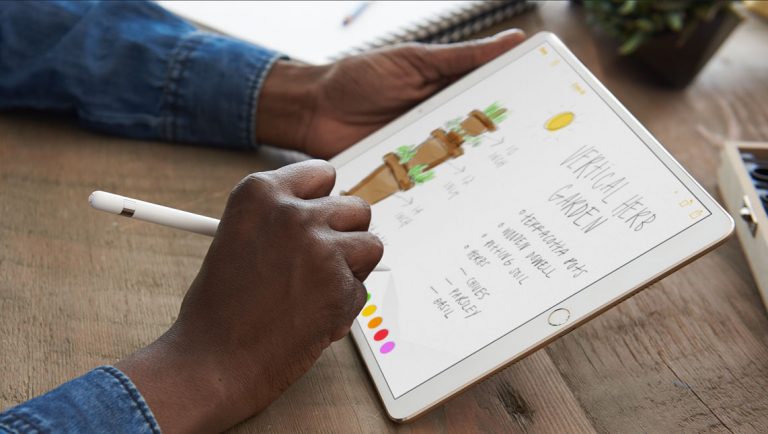 Apple has launched two new iPad Pro models, available to order from today, to ship out to purchasers next week. They feature a number of enhancements over the old models, and will further benefit from the new features to appear in iOS 11 when it releases later this year.

The two principal models have the 10.5 inch and the 12.9 inch screen sizes. They are available in both Wi-Fi only and Wi-Fi + Cellular models. The latter support 4G/LTE. WiFi works with 802.11ac standards.

They are available in three “sizes”: 64GB, 256GB and 512GB. They’re powered by the six-core 64 bit A10X Fusion chip. Apple says that this “provides performance that is faster than most PC laptops shipping today”.

One big new feature is the screen which features “ProMotion” technology. That gives it a 120 frames per second refresh rate for ultra smooth motion (standard movies are 24fps, Australian TV is 50fps, most computer monitors are 60fps). The DCI-P3 Wide Color Display colour standard is supported for better representation of real-world colours.

iPads and other tablets have traditionally sported lesser cameras than their smart phone siblings. No longer. Both iPad Pro models get a 12 megapixel f/1.8 camera with support for HDR, panorama mode, a four LED “True Tone” flash, body and face detection and so on. They’ll capture UltraHD video at up to 30 frames per second and 1080p at up to 60fps.

The f/2.2 front camera can do 1080p recording and take seven megapixel photos.

If you opt for Apple Pencil (price $145), latency (the time between action and response) is down to an insignificant 20 milliseconds. The “Smart Keyboard” models are different for the two, given the size, and are priced at $235 and $245 for the two sizes.

Apple says that you can expect a ten hour of battery life from both of the Wi-Fi only models, and nine for the Wi-Fi + Cellular models.

There are four colours available for the 10.5 inch iPad Pro: Space Grey, Silver, Rose Gold and Gold. There’s no Rose Gold option for the larger model.