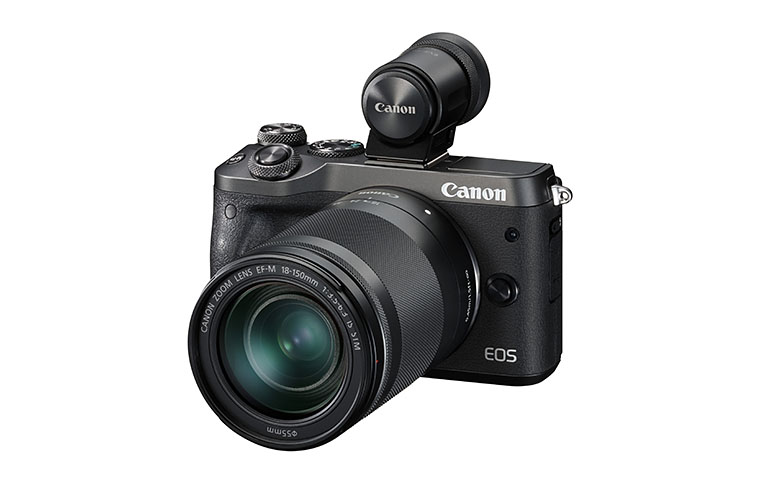 Canon has announced the release of, well, a fair bunch of stuff today. Principally cameras: two DSLRs and one mirrorless digital camera.

Let’s start mirrorless. The Canon EOS M6 is one of those compact models which look positively tiny once you’ve mounted a decent sized lens on it. (Pictured above with EVF-DC2 attached.) Part of the space saving is due to the omission of a viewfinder, but don’t worry, you can add an external one – the optional EVF-DC2 – to the camera’s hot shoe. This has a pleasantly instrumental appearance, and certainly keeps things out of the way since you can pocket it when it isn’t in use.

The rear display will normally be used for framing and such and this can fold up by up to 180 degrees, allowing easy photography from weird angles, including selfie-style. The LCD screen is touch sensitive for convenient control

The EOS M6 has Bluetooth and WiFi built in, with NFC for easy pairing.

The EVF-DC2 viewfinder is also compatible with a number of Canon PowerShot model cameras.

The EOS 77D and EOS 800D are full digital single lens reflex cameras. They use the same “sensor technology” as that in the EOS 80D. That’s a 24.2 megapixel APC-C CMOS sensor. They both feature a new “visually guided interface” to show how best to use different shooting modes. Sound’s good for those new to the more controllable photography offered by real cameras.

The EOS 77D also has a top-mounted LCD panel for displaying settings.

Both cameras include five axis stabilisation and have Bluetooth connectivity.

That last allows the use of the new BR-E1 remote control which works at up to five metres and apparently can even control focus and zoom.

Finally, Canon is releasing a new EF-S 18-55mm f/4-5.6 image stabilising lens, which is says the smallest in its class. That focal range translates to 29 to 88mm in 35mm equivalent terms. The image stabilisation is good for four stops.

All these products will be available from end of March 2017.

As is Canon’s practice, it leaves you clueless as to whether these products might be good value for money (“Prices will be set at dealer discretion”), at least until they appear in retail outlets. I checked with a couple of the big Australian retailers but they weren’t listing prices yet, although they’re prepared to take deposits on pre-orders for a couple of them. In the US the EOS M6, body only, is listed as starting at $US779, while the EVF-DC2 viewfinder is available for $US249. The EOS 77D is down for $US899 (body only). I couldn’t find the EOS 800D. The remote is $US45.