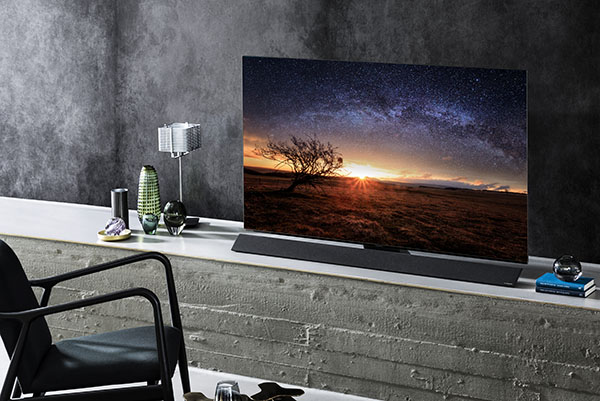 The occassion was launch of the Panasonic 2018 TV lineup. But more than that it marked 100 years since Mr Matsushita founded the company bearing his name.

Paul Reid, Managing Director of Panasonic Australia, said that the Japanese company had thrived due to three principles

Later called Panasonic its first black and white TV was in 1952 and colour came in 1960. Later it commanded the highest market share of flat TVs. Its plasma panels massively outperformed the burgeoning cheaper LCD panels.

Panasonic introduced its EZ range of OLED TVs in 2017 (GadgetGuy overview here). These are still current with the addition of FZ series to the 2018 TV lineup.

Reid said that the next 100 years was about harnessing Artifical Intelligence, Robotics and a focus on seamless technology helping to improve our life experience.

Deluxe and the others – Company 3, EFilm and Encore – are post production companies which have worked on major Hollywood movies including The Martian and X-Men: Apocalypse.

They have professional ‘reference’ monitors so that they can see what they’re doing when adjusting things like contrast and colour for the final movie presentation. The Client Reference Monitors are what they use to ‘see’ how it looks in the home.

The people from Deluxe Studios say they often find themselves using their Panasonic OLED monitors instead of their reference monitors, thanks to the larger screens. For those wanting the highest accuracy, Panasonic has included improved calibration features. Of course, they support HDR and the new open source HDR+, but not Dolby Vision.

Like HDR, HDR+ extends the range of black and white levels, but like Dolby Vision, it adds “metadata” which can adjust the scale scene by scene. However, I have yet to see any HDR+ UltraHD Blu-ray discs or other content appear, whereas I have on my shelf already at least one Dolby Vision title.

They include Panasonic’s Absolute Black Filter, designed to reduce reflections from the screen, and plenty of under-the-hood improvements, including a new picture processor. Called the HCX 4K processor (Hollywood Cinema eXperience) it uses a “Dynamic Look-Up Table” to automatically optimise colours depending on the room light conditions.

The FZ1000 series features the “Dynamic Blade Speaker” – a built-in, front-firing soundbar that shoots the sound in the direction it’s supposed to go.

It has 40% higher volume and deeper bass over last year’s model. If the TV is wall mounted the blade can be folded down flush for higher performance and better styling.

The “entry” level OLED FZ950 series has mostly the same set of features and performance as the FZ1000. But it doesn’t include the Dynamic Blade Speaker.

I always recommend that you use an external sound system for your TV. The Blade is good, but there are many better standalone audio systems. If you do that, the FZ950 TVs are a relative bargain. The 65″ model costs $5,999 and $3,849 for the 55″.

The new Panasonic OLED TVs will be available in July.

Panasonic has also launched several new ranges of UltraHD LCD/LED TVs. FX800 is Panasonic’s top of the range. Its standout feature is the “Art and Interior” glass design. This features a panel with a clear glass bezel that is an almost OLED level of thin over much of its surface.

Despite being so thin, Panasonic says that it has improved the Local Dimming Pro backlight control to fine-tune brightness “in thousands of areas across the screen”. This range also gets the same HCX 4K processor as the OLED models. The 65″ will set you back $3849 for the 65″ unit, while the 55″ model is $2749.

All feature the latest version of Panasonic’s smart My Home Screen TV interface. Initially called Firefox TV OS when first introduced, Mozilla stopped further development in 2016. Panasonic took it over and calls it My Home Screen, now up to version 3.0.