It’s Autumn in Australia, which means outside temperatures are about to become whole lot cooler. Wouldn’t it be nice if you could find a heater that matched your sense of style? Well now you can.

Built on the same principle upon which Dyson’s blade-less fans were developed, the Hot + Cool aims to bring heating and cooling together in a product that is both safe, portable and efficient.

With a design resembling a long, round-edged rectangle, the fan looks a bit like the number “0”, albeit one stretched out of chewing gum. Made from plastic, the blade-less fan sits atop a compact base, and can be tilted up and down, and moved left or right to distribute heated air in the direction you choose.

Within the body of the unit is a motor Dyson says is capable of taking in air and then expelling it six times faster. Air ‘sucked in’ through an array of small holes at the bottom of the unit passes over a ceramic heater hidden within, and is then pushed out through the exit slits alongside the inner frame of the fan. A small stream of cold air is simultaneously flushed out of the slits, allowing the fan to stay cool to the touch.

A inbuilt thermostat monitors the fan’s temperature and switches the unit off once when the ambient air temperature is reached. A cut-out switch is provided for safety, turning the fan off automatically should it fall over.

The Hot + Cool features operational buttons on the front, as well as a small LED screen indicating the set temperature setting. A small curved remote is also provided, with magnets on the top curve of the Hot + Cool allowing you to store the remote where you can find it.

Just like Dyson’s Air Multiplier fans, the Hot + Cool does a respectable job of pushing air out into a room, and does so at temperatures up to 37ºC. Like any portable heater, it’s most suited to smaller rooms, with best results achieved in enclosed spaces – so keep any doors closed to retain the warm air. The heater fan is incredibly quick to warm up, and in less than a minute we had hot air blowing in our general direction.

The heater lacks a timer – so you can’t set it to warm up a room before you get out of bed in the morning – but it does put itself on hold once the thermostat detects that ambient air has reached the desired temperature.

While some heaters can emit a strange smell during operation, caused by dust burning on the heating element, Dyson was pretty specific about this not being a problem with its Hot + Cool. Its elements apparently do not heat beyond 200ºC, making it harder for dust particles to burn. We did not a detect any smells during our trial period.

We have no complaints about the heat levels or force at which the Dyson disperses warmed air, but the fan can be overly noisy, especially at higher speeds.  It’s not the whirring, mechanical sound that accompanies most other heaters, mind you, but rather the sound of  air rushing at high speed. If this is likely to bother you, a radiator or bar heater may be the way to go.

Also, the name “Hot + Cool” is a bit of a half-truth. While this Dyson generates hot air, its motor is unable to speed up the air passing through its fan in the same way the Air Multiplier does. So while it can deliver cool air, it won’t deliver a breeze at temperatures to make you forget about Summer. In short, it’s not as effective as a dedicated cooling appliance, so put away some pennies for one of these when November comes around.

One the matter of price, the Hot + Cool costs more than $500, making it one of the most expensive portable heaters you can buy.

While the Hot + Cool suggests two-in-one functionality, it performs best as a winter warmer.  If you can cope with the designer price tag, it’s a stylish and capable portable heater. 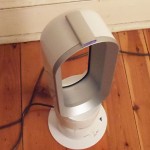 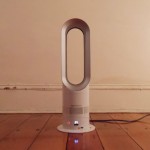 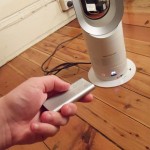 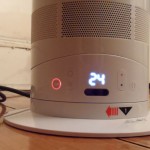 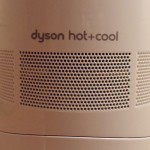 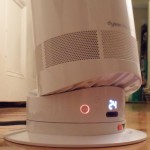 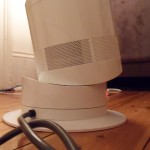 Sir James Dyson – the man, the company and the vision

Spring is in the air. Time for Dyson Pure Cool Mk II