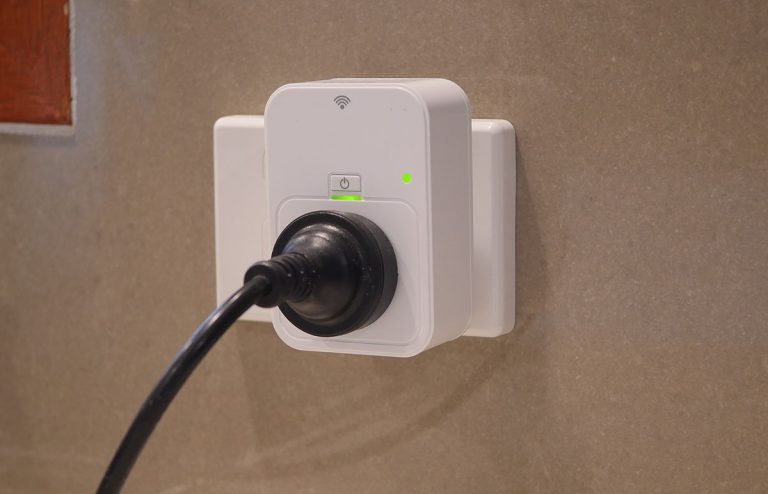 No matter how smart we attempt to make our homes, they’re still full of not-so-smart electrical devices. That’s where things like D-Link Smart Plugs come in. You plug one into a power point. You plug a dumb electrical device’s power cord into the Smart Plug. And now on and off comes under the control of an app on your smart phone via your home network.

D-Link sent over a twin pack for review. That’s priced at $89.95. You can also buy them in singles at $49.95 each. Each one operates independently from all the others, so there’s no particular reason why you couldn’t put a hundred in. The limiting factors are likely one’s finances, the complications of managing lots of devices, and of course the 250-ish limit on the number of devices that can be used with a normal home network.

Each D-Link Smart Plug is a box measuring 90mm tall by 62mm wide and 35mm deep. On one side is a standard three pin Australian power plug. The round base of the plug protrudes another 8.5mm beyond the body of the device. It’s down towards the bottom, so the body of the device extends 13mm below the bottom of the earth pin (that’s the one that goes straight up and down).

I mention these dimensions because sometimes power points and power boards are in strange places that may not accommodate things well. But if that’s a problem, you can always use a short extension lead to allow more freedom.

On the face of the device is a three pin power socket. It’s rated at 10 amps. For practical purposes, that’s 2400 watts. It will support basically any electrical thing you can plug into a standard home power point.

Above the socket is a small “soft” power switch. (Soft? It controls things electronically, rather than clicking physical contacts like an old fashioned power switch.) There are also two indicator LEDs, one for WiFi status, the other for power on/off. On the side is another soft button, this one for connecting to the network via WPS (it can also factory reset the device if held in long enough).

Each comes with a little card with a QR code to assist with setting up, along with a very brief quick start manual (it basically says: download the app, tap “Add a new device” and follow the instructions). I was momentarily worried because there were two cards and two smart plugs. Which belonged to which?

The app is mydlink Home. It has a hundred thousand plus downloads and a fairly unimpressive Play Store rating of 2.6. It’s free of course. If you don’t already have one, you’ll need to sign up for a free D-Link account. I’d already signed up for that – even though a different app is used – when I reviewed the D-Link Full HD Wi-Fi Camera a couple of months ago. Once I started the app and signed in, the camera appeared in the app as an existing device. When I tapped on it, the mydlink Lite app started up so I could use the camera.

But back to our Smart Plugs. I needn’t have worried about matching the cards to the devices. Both the plugs and the cards had the device’s SSIDs and PIN codes printed on them, so they were easily matched. But I didn’t even need to do that. After telling the app that I was setting up a new device, it told me to scan the QR code. There is a very small one on each plug, and it worked with that.

Except that it wasn’t. The app couldn’t find the Smart Plug. “Please make sure your device is powered up”, said the app, “and your mobile device is connected to your home Wi-Fi.” Both were. I went into my router’s management page and found that the smart plug was indeed connected to it (under the name “DSP-W215”), so the option of restarting setup didn’t seem attractive. There was a “manual” setup process, but this involved resetting the plug as well, then connecting to it as a WiFi access point and feeding it the necessary information to connect to the network. To which it was already connected.

I’d been using a Samsung Galaxy 7 phone, so I got the iPad Mini 4 busy downloading the iOS version (just in case) and restarted the phone to clear the app. When I restarted the app, it found the smart plug quickly and wanted to set it up. Go ahead I said. Shortly it asked for the PIN on the card associated with the device.

And kept reporting that “The PIN Code is not correct.” I tried three times with the same result, then I pulled the plug to check that it had the same PIN printed on it. It did. I plugged it into a different power point to see if that changed things.

And that did the trick. Was it the different power point? The fact that pulling it and re-plugging it forced a restart? Who knows. I forced the app to stop, restarted it and it again found plug and asked to set it up. This time the instant I entered the PIN it went straight to the next page, to confirm the time zone. Then a chance to give it a name and a new icon (you can use your own photo library for that if you don’t like the existing ones).

Voila! Done. Except, inevitably, as the device appeared on the list in the app it said that a firmware upgrade was required. A tap got that going.

So while that was doing its stuff, I decided to get the other smart plug going. This time I figured I’d use the non-WPS method. I found the access point, the app connected and showed my home network access points – only the 2.4GHz ones were shown, not the 5GHz ones – and asked me to pick one, then enter the password. Which I did. Then I was to wait until the blinking orange light turned solid green. Which it didn’t.

I repeated the process using the iOS version of the app on the iPad Mini 4. This time it worked perfectly. The LED on the plug changed to green within a couple of seconds, the app found the device and did the time zone, name and icon thing. Followed by the firmware upgrade.

I’m thinking the mediocre app rating (there was no rating for the iOS version – not enough ratings said the App Store) might have a lot to do with installation difficulties. Perhaps with the upgraded firmware they would have been less apparent, but of course you don’t get the upgraded firmware until after you’ve successfully installed the device.

Those installation wobbles are a real pity, because once you get past them these devices turned out to be reliable and easily usable, and the app – both on Android and iOS – highly effective.

The app presents a list of your devices. There’s room in the list for plenty of them. Each of the smart plugs has a power button next to it in the app so you can switch them on and off very easily.

Tap the individual device and you come to a control and information page for that device. Again there’s a power button at the top. Next is a meter reading, showing the power that’s currently passing through the device. Tap that and you can see a monthly chart showing kilowatt-hour usage. So it’s not just about control, but also monitoring.

There’s also a temperature monitor, and you can set the temperature limit for the device to between 0 and 80 degrees Celsius, with a default of 60.

Most importantly, there are extensive scheduling capabilities. There’s a simple mode and a more complicated one. The latter allows you to specify start and end times on a weekly schedule. You can just tap the schedule to start a range, then drag the end points. Very simple to use.

You can create groups of devices in the app. This doesn’t seem to allow global control, but it does mean that if you have lots of devices you can drill down in a logical way. For example, you might have all the loungeroom devices grouped, so you’d go first to the loungeroom group and next adjust individual devices within that.

There’s also a page to set actions and responses. With the smart plugs you can have the action be either the temperature or energy consumption reaching a set limit. The response can be a notification or email, or one of the other devices responding switching on or off.

Finally, what about that soft power button on each unit? That’s a manual override to switch it on or off.

It’s a pity about the connection issues. I wouldn’t let it put me off. As with many of these things, it’s usually just a matter of persisting, and doing the odd restart along the way. Once that’s done, the D-Link Smart Plugs turned out to be very effective controllers, with the unexpected benefit of monitoring and even system protection.