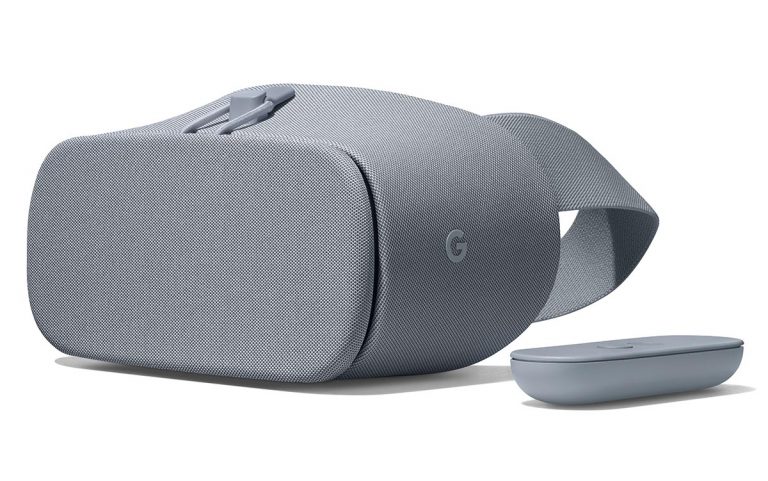 Serious indeed, at a price of $149, but currently (as I write) discounted to $119 at Google’s online store.

Like Google Cardboard, Google Daydream View is essentially a passive device. It holds your phone close to your face, and provides lenses so that you can focus on the screen up close. It works in conjunction with an app on the phone that divides the screen in half so that each eye can see only its half. That enables such things as a 3D view, if implemented.

But, just as importantly, the app also pays attention to the phone’s motion sensors and uses all this information to change the view. If you rotate your head to the left, you see further to the left than you could see before. Likewise for up, down, behind you. Ideally, it’s as though you’re in a completely different place, at least as far as your eyes can see. You just move your head to look at something else, just like the real world. That is virtual reality.

I’ll note briefly that Google is also currently spruiking its “Daydream standalone VR headsets”, which it says are “coming soon”. They, presumably, will have the screen and the smarts built in.

The Daydream View is finished in a soft, stylish fabric. The review unit’s colour was light grey, called “Fog”, and there’s also a dark grey “Charcoal” and a reddish “Coral” available. The problem with VR is the weight hanging on the front of one’s face. Google has kept this one about as light as possible. According to my scales, they weigh 266 grams.

The lenses are large, around 42mm in diameter. That tends to provide a good wide angle of view.

The Daydream View is not entirely passive. It comes with the Daydream controller, which connects to your phone wirelessly. It also has motion sensors and some buttons to control things. It has a rechargeable battery. You’ll have to use your phone’s charger and cable. It uses a USB Type-C socket for charging.

The Daydream View came from Google with the Google Pixel 2 XL, reviewed here, so I decided to use that phone for this review. But it isn’t locked into that phone alone. Google specifies a number of phones it considers suitable. They include, apart from both Pixel 2 models:

The criteria for inclusion is, apparently, that “Daydream-ready phones are built for VR with high-resolution displays, ultra-smooth graphics and high-fidelity sensors.” That makes sense.

I’m not sure where that leaves phones like the Sony Xperia XZ Premium, which meat those criteria but aren’t listed. And presumably more recent models, such as the Huawei Mate 10 would also work.

Or maybe note. The Google Play Store reported that the Daydream app was not compatible with the Huawei Mate 10 (nor, for that matter, with the Samsung Galaxy S7, nor the Oppo R11). So make sure your phone comports with Google’s list of compatible models.

The first thing to do is install the Daydream app on the phone. Since I was using a Pixel 2, it already had the app installed. It starts by asking whether you have a “Daydream-ready” headset, and has a purchase link in case you don’t. That’s followed by a warning, which says you should be at least 13 years old, and have reviewed the “Health and Safety information” that Google has made available.

The next page tells you how to adjust the Daydream View to fit. The straps adjust easily. I have a fairly large head and for comfort I had them as loose as they’d go. Do note that you may need to adjust them again once the Daydream View has the phone in place, since that will increase its weight. At that point, I also noticed that my reading glasses were comfortably accommodated by the headset.

Once you put on the rig there are a few training screens, principally showing you how to use the controller. It has home, apps and select buttons, plus volume up and down on the sides, and a touchpad controller. Most importantly, it acts as a pointer, so you can point and select things within your view. It is represented as a visible line stretching from more or less where your hand is  to the dot at the end.

There are no individual adjustments for each eye, so if they are unbalanced in any way, you’ll need your glasses. Even though I need glasses for reading, the brightness of the image and the size of the magnification was sufficient to ensure I could see very clearly without them.

Indeed, I could make out the pixel structure of the display. The Pixel 2 XL phone has a resolution of 2880 by 1440 pixels, which you’d think would make for a super smooth image. But you are actually looking at a much larger effective area than if you were looking at a screen. It’s spread out to cover your whole field of view.

The pixel structure isn’t particularly intrusive. The resolution is fairly low. Think somewhat less than standard definition in terms of sharpness and detail. But I hasten to add that, for the time being, this is as good as it gets. This is determined entirely by the resolution of the display. Sharper VR is going to have to await ludicrously higher resolution displays, so I’m suspecting that will be in special purpose VR googles, not those using a phone.

But back to what we have. The colour was good. There was some rainbowing – misalignment between the three colours, leading to the RGB components fringing around white objects. There was only a little in the centre of my field of view; much more to the extremes. But, of course, a turn of the head brought those extremes to the centre of my field of view and got rid of most of the fringing.

The Daydream system was extremely responsive. Whenever I turned my head, there was never the slightest sense of lag or delay. That made the experience very natural. It positively encouraged the desire to look around.

The main menu offered several games – they tended to cost two or three dollars. There were also a number of YouTube VR offerings, some of which looked as though they may have been interesting. For someone stuck in a 5-6Mbps Internet world, though, they were unusable since they demanded too much bandwidth.

Far more fun, given my slow Internet, were the VR photos which allowed me to look around all manner of scenes. Including my own panorama photos. And Google Street View had a bunch of special scenes, allowing me to move throughout the Palace of Versailles, for example, look up at the painted ceilings and at the immense wealth of decoration in any direction.

The Controller feels good in the hand, and it’s easy to do by touch everything you want to do, rather than having to reach up to controls you can’t see on the headset itself. Perhaps slightly broader control should be enabled. At one point when the battery in the phone was starting to get a little low, I plugged in some power to its USB Type-C port. But I used a cable from a dock which also has an audio DAC built in, so a message popped up wondering which app I wanted to use. I could find no way to dismiss this without taking the phone out of the headset.

The Google Daydream View is a comfortable and effective VR system for a compatible phone, and is probably about as good as the technology gets at this point. Just make sure that the Daydream app is compatible with your phone, although you can still use the headset itself with other VR apps.