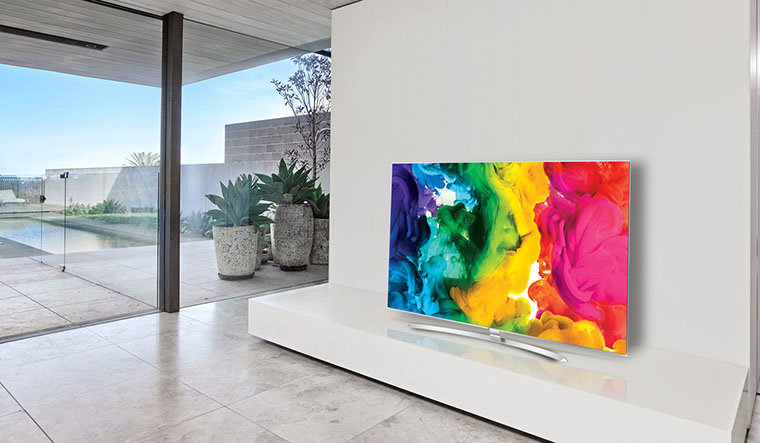 One of the hottest things in TV panel technology at the moment is OLED. LG’s OLED TVs sit at the premium end of the market, and have incredible picture quality. A TV using LCD with LED backlighting is generally around one to one and a half thousand dollars cheaper than a similarly equipped and sized OLED model.

Which brings me to LG’s latest premium LCD/LED model – LG calls it ‘Super UHD’ – the 65UH950T. At just under six grand, it’s reasonably priced for a 164cm model, and has the very best and latest of everything that LG has to offer, barring only an OLED panel.

The most startling thing about this TV, though, is its styling. It’s very nearly as thin as an OLED. The flat panel is just 6.6mm thick for the bulk of its area. It swells out to 54.2mm near the base in order to provide for the electronics, connections and so forth.

Before I get to the main game on this TV, let me briefly mention the joys of current high end LG TVs. Briefly because they are similar to those of LG’s current 65 inch OLED model which I reviewed a couple of months ago. Read the fine detail here.

LG’s excellent operating system – WebOS – is up to version 3.0 in this model. Little has changed on the face of it. It remains easy to use, especially with the ‘magic’ remote control, which carries a good complement of traditional TV remote control keys to supplement its point and shoot functionality.

WebOS operates in a highly responsive manner, thanks in part to the quad core processor. Amongst the many smart functions are the ability to stream all manner of video and audio from your network, and from online sources. Netflix, in particular, can stream Ultra High Definition and High Dynamic Range content on this TV. It is a ‘Netflix recommended’ model. It can connect to your network via cable, or using the dual-band WiFi connectivity.

Basically, all that stuff is as good as it currently gets. The TV section is also highly effective, with the Freeview Plus apps and EPG built in, along with the ability to record to storage plugged into one of the USB sockets.

But what’s particularly special about 2016 is, finally, the release of UltraHD Blu-ray. This offers improved picture quality in three different areas, with a fourth to come. First, and most obviously, the UHD part. Picture resolution quadruples over Blu-ray to 3840 x 2160 pixels, which not coincidentally precisely matches the resolution of the panel on this TV.

Second, it offers HDR – High Dynamic Range – which allows 1024 levels of brightness, also quadrupling that of the conventional Blu-ray standard. That means it can go brighter at one end, darker at the other end, while having smoother graduations between the extremes.

Third, it offers a wider colour gamut, called Rec.2020 rather than Rec.709. This in theory delivers more than twice the range of colours.

Finally, as an option, UltraHD Blu-ray may support Dolby Vision. This quadruples yet again the brightness levels to 4096, and also includes ‘metadata’, instructions in the data stream that provide guidance to the Dolby Vision decoder to control the picture on a scene by scene basis.

And you know what? This TV supports all of those.

Let’s be clear what ‘support’ means. In fact, there are two aspects to this. The first is whether or not a TV can accept the signal itself. The other is the extent to which it can actually deliver an improved on-screen experience using this higher specification signal.

Well, the LG 65UH950T can indeed accept all aspects of this signal. I’m taking it on trust that the Dolby Vision thing works. I was able to play some Dolby Vision Ultra High Definition clips from USB, and those worked. But there are no Dolby Vision UltraHD Blu-ray discs available yet.

But the other elements of UltraHD worked beautifully, with just one limitation that I’ll get to in a moment.

I had a bunch of UltraHD Blu-ray discs, and they delivered superb detail, as you’d expect from UHD. Now I’m not going to say that it was eye-jarringly different to what you’d see with standard Blu-ray, because a UHD TV like this does a very fine job of upscaling Full HD to its UHD panel. And a lot of film material actually falls short of UHD in its own native resolution. But what I could see was that there was not once any hint of jaggies, or distortion caused by scaling. The image was, on this front, perfect.

LG doesn’t specify the maximum brightness of the panel, nor does it indicate a contrast ratio. However it was clear that the TV was able to go very bright, including when reproducing bold colours. Under the full glare of fluorescent room lights the image was wonderfully attractive and clear.

In a darkened room, the limitations of the LCD/LED panel became more evident. While overall it was able to go quite dark, and there was clearly ‘localised dimming’, in the sense that the backlight adjusted to the requirements of the local area, it was a little uneven. Because the panel is so beautifully thin, all the lighting would seem to be in the bottom section. That meant that the mirrors getting the light to the top of the screen produced some breakthrough. It wasn’t objectionable because it was strong, but because it was uneven.

This was only noticeable when watching darker material in a darkened room. In that environment, OLED rules.

I should note that the panel itself is rated at 10 bits, which means each pixel can deliver 1024 levels of brightness. Some lesser TVs fake 10 bits by ‘dithering’ across groups of 8 bit pixels.

Finally, LG rates the panel as supporting up to 120% of the colour gamut available under the Rec.709 standard. To get everything possible from UltraHD Blu-ray a bit more than 200% is required, but the boost from this TV is getting us part way there.

I found that there was a particular glowing quality to some of the reds, and a lusciously natural look to green grass and earthen tones, which pushed the picture beyond what has for so long been the norm.

There’s no doubt that OLED still reigns in the premium TV performance world. But if you want an elegantly styled, high quality Ultra High Definition TV at a more affordable price, you must check out the LG 65UH950T.