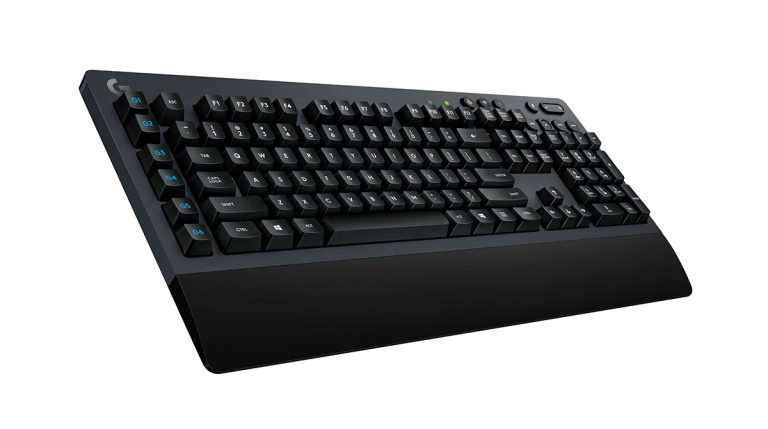 Perhaps it’s just me, but intuitively, it seems like the two things don’t go together: a mechanical switch keyboard action, and a wireless connection. Or perhaps it’s because the last two Logitech mechanical gamers’ keyboards (reviews here and here) we looked at came with a good old USB cable for connecting to the computer.

With the G413, though, Logitech is catering for those who want the feel, solidity and performance of this kind of keyboard, along with the relative freedom of wirelessness.

So what’s all this “mechanical” stuff about? It’s really about the feel of a keyboard. Most computer keyboards use membrane switches, or something similar. The G413 uses good old fashioned mechanical switches. Well, not quite so old-fashioned. The Romer-G switches are highly developed and rated for 70 million keystrokes of operation … each. But there’s a clearly different feel to the mechanical action. Once that just feels more satisfying.

They are designed to trigger just 1.5mm into a keystroke, yet be able to be pressed through a full stroke. “Actuation” pressure is 45 grams.

That’s a figure that is typically meaningless to people who don’t run around with equipment to measure the weights of pulls and pushes. And that includes me. So I’ll just note at this point, it’s at least as light as any other keyboard.

The keyboard is full size. A little over full size, in fact. That’s because there is a column of six programmable keys – G1 through G6 – down the left hand side of the keyboard which of course widens the whole thing. At the right hand side is a proper numeric keypad with a cluster of media control keys right above it.

Right at the very top is the “Gaming Mode” switch – I’ll return to that – and an indicator showing when the wireless communication switches on. Logitech’s tiny “Unifying” USB wireless dongle is used for the keyboard to communicate with the computer. It is pre-paired with the keyboard, so it’s just plug and play.

The keyboard – unlike the previous Logitech gaming models we’ve looked at – don’t feature backlit keys, let alone lights with all kinds of interesting colours. That would kill battery life. As it is, the keyboard is rated to last for up to eighteen months on a pair of AA batteries. No fiddling around with chargers. The keyboard manages its own power, but there’s also a switch to the right hand side of the keyboard, so you can preserve the batteries for even longer if you’re going to be away for a lengthy period.

But to get the best out of the keyboard you’ll want to download and install Logitech’s gaming software. I’ve mentioned this in previous reviews, and I’d thought it was only for configuring keyboards, but it turns out that it manages just about any Logitech hardware plugged into the computer. There’s a different page for each thing like a Logitech mouse, the Brio 4K webcam,  a Logitech headset and so on. For the keyboard, you can use the software to assign functions to the programmable keys, amongst other things.

First things first. Typing on this keyboard is a real pleasure. Before even getting to the keys themselves, the body of the keyboard is extremely rigid. While I was pounding away there was no flexing, no creaking, no protest. That in itself is a big part of satisfying keyboard operation.

The keys themselves felt fine under my fingers. They registered perfectly every time – once I’d sorted out a setting we’ll get to. Again, they may take just a little to get used to at the very start because they register near the top of their travel. If you’re the kind of person who had gotten into the habit of half pressing keys while contemplating what to type next, you’re going to find a lot of gobbledygook appearing seemingly unbidden on the page. You’ll soon learn to rest more lightly, or even keep your fingers from the keyboard when not actually seeking to input something.

The keyboard is optimised for gamers, which is why I love the feel. What works for gamers works for typers. Positive, reliable.

There were a couple of things I had to get used to. First, it took me a little while to train myself not to accidentally punch the “G” programmable keys when I really meant to hit the Esc or the left Ctrl key. I am so used to those keys being the left-most on a keyboard, that was the biggest shift I had to make.

Making keyboard batteries last a long time requires clever power management. So the keyboard largely shuts itself down after a while to save power while waiting for a keystroke to wake it up. I’m not sure quite how long it took to go to sleep, but it was certainly at least many minutes, and possibly several hours.

But I did notice I had this weird typo that kept recurring. I’d be part way into a sentence, glance at the screen, and see that the first letter of the sentence was in lower case. It took me a while to come to understand what the issue was. It happened only when I was returning to the keyboard after a break. I’d start typing with a new sentence, which meant hitting the Shift key followed an instant later by the letter key. But it seems that the keyboard was detecting the Shift key and switching itself on, but not acting on the status as the next key was hit. Thus it was delivered in lower case.

Related, but with a slight difference, I also found that when I’d press and hold the Windows key followed by an arrow key to move a window it didn’t work quite as expected. Instead of the Window snapping to the left of the page, the Windows menu would open. Again, this was only after a break away from the keyboard. In this case it seems that the press and hold was being registered as a single press.

The trick, which I learned fairly quickly, was just to tap a shift or control key on returning to the keyboard to make sure it was awake. (I use those keys rather than, say, the space bar because, if the keyboard isn’t asleep, hitting the space bar might insert something into the document,)

When I first installed the keyboard, the Windows key wouldn’t work. The instructions, such as they were, weren’t really helpful. But I noticed that there’s a button near the top of the keyboard marked with a joystick logo. It’s not actually a button but a slide switch. It was in the position that puts the keyboard in “Gaming Mode”, and by default that disables the Windows and Context Menu keys. In the Logitech Gaming Software you can define which keys you want disabled when that’s engaged. Slide it to the other position and nothing is disabled.

The media keys – track skip, play/pause, stop, mute and volume up/down – all worked without any special configuration on my preferred media software – both JRiver and Foobar 2000, along with the Spotify app.

The Logitech G613 Wireless Mechanical Gaming Keyboard combines the wonderful feel of a true, old-school mechanical keyboard with a light touch and the convenience of wireless connectivity. All at a very reasonable price.

Overall
Features
Value for money
Performance
Ease of Use
Design
Reader Rating0 Votes
Great feel, solid base, useful media control keys, can speed up things with half a dozen programmable “G” keys
Needed to get used to keyboard wake-up process
4.6