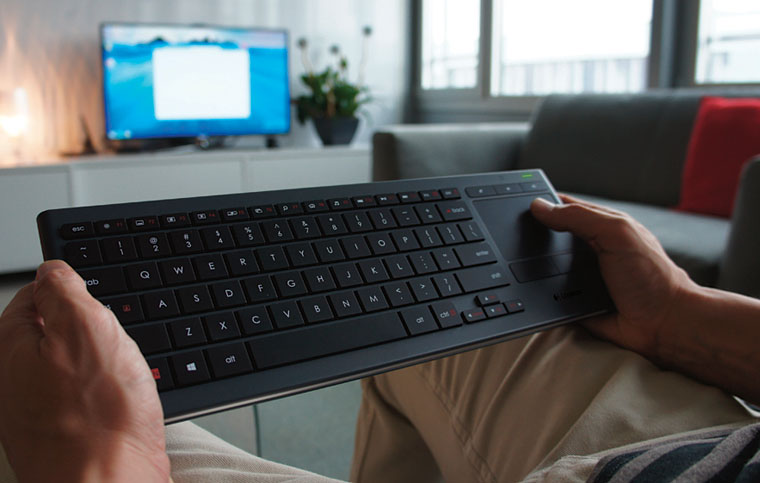 It’s all very well having a web browser built into your smart TV, into your smart Blu-ray player, into your smart almost-everything-else. But using those and many other smart features is a real pain. Why? Because of the user interface. Try typing an email using a TV remote control to choose letters from an on-screen keyboard and you’ll soon be wondering why they even both to put a browser in it.

Which is why most smart devices support a physical keyboard. You don’t really want to be tethered by keyboard wire to within a metre of your TV so you need wireless. Some TVs support Bluetooth, but just about all of them have a USB socket. You can use any old keyboard, but you’ll want a mouse as well, so why not have both functions built into one neat device. That’s what Logitech’s K830 keyboard offers.

As you can tell from the name, the Logitech K830 “Illuminated Living-Room Keyboard” is aimed specifically at this task. Basically, it has a nearly full-sized keyboard covering most of its surface, with a trackpad – 79mm by 51mm – to the right. The trackpad has proper left and right click buttons underneath.

The K830 works using Logitech’s own wireless connection system to a tiny dongle, called a “Unifying Receiver”, plugged into a USB socket. The underlying comms system is Bluetooth, but it isn’t open to use with other Bluetooth devices.

Logitech’s “Unifying Receiver” supports up to six compatible Logitech keyboards and mouses so you can add more devices without using any more USB sockets. This could be useful if you prefer an actual mouse to a trackpad. Many of Logitech’s wireless input devices work with this.

The keyboard has rechargeable Lithium Polymer batteries built in. A few hours charging is enough to last for a year, unless you use the backlight, which reduces it to around twenty hours (Logitech says two hours a day for ten days). A standard USB charger will do the trick. A USB to Micro USB-B cable is included, along with a 1.5 metre long USB extension cable. That’s useful because USB sockets on TVs are usually well hidden by the body of the TV, which can then get in the way of communications. Logitech says that this system has a wireless range of up to ten metres.

Initially I thought the keyboard was full sized, but it turns out to be slightly smaller: around 95% both in width and height. I had no trouble adapting. In order to keep it compact, Logitech has made the primary tasks of the function keys into shortcuts and controls, such as media play/pause, operating the backlight manually and so on. The volume and mute keys are separate, just above the touchpad. The page up and down, and home and end keys are the arrow keys, Fn-shifted.

The keyboard is somewhat configurable using software downloaded from the Logitech website. In addition to allowing additional devices to be added to the Unifying Receiver, and you can set the function keys to be the default, making the other functions accessible via the Fn key. Obviously you need a computer for that.

The feel of it

I rather liked unpacking the keyboard. This high tech device was packed with old-world charm, the keyboard neatly wrapped in tissue paper, no plastic in sight.

The keyboard is quite solid, so there was no flex as I pounded away. There’s not a lot of travel, but typing was still quite acceptable. Think of it feeling like the keyboard on a good quality laptop. I was surprised when I measured it to find that it was slightly smaller than normal since it felt quite natural. There are no built in legs to tilt the keyboard for more comfortable typing. You’ll need to prop it on something if you need a tilt.

The default setting of the backlight is “automatic”, so it kicks in whenever the light sensor thinks things are dull enough. There appear to be two “on” levels, plus “off” of course. You can override these and cycle through the three possibilities using a key. The backlight was very effective at illuminating the primary function of keys, including the letters. However it didn’t backlight the red lettering for the secondary function of those keys having them. The red was actually fairly difficult to read on the black keys, especially as most of the red labels were actually icons, as inscrutable as icons usually are.

I spent a bit of time with the keyboard plugged into a Windows notebook computer in order to get a feel for it, and it worked pretty much as expected. The trackpad was about as effective as they usually are, and it supports two fingers scrolling and swiping, plus two fingered pinching and stretching apart for changing the zoom level of zoomable things, such as photos and the web browser and the size of documents in Office programs. A light tap on it doubles as a left click, and a light two-fingered tap is a right click.

My feeling was that there was tiny, almost unnoticeable latency in the touchpad, the slightest of delays between sliding and the pointer responding. Not enough to impede productivity. Key strikes seemed about as responsive as a wired-in keyboard.

But it’s controlling your home entertainment gear that’s relevant here. How well it works is going to depend entirely on the gear. For example, I tried a HiSense TV, and the keyboard and trackpad worked fairly well in the web browser, albeit with enough milliseconds of delay to be slightly disconcerting. But it did nothing in the general smart interface. For that you have to go back to the regular remote control. A Samsung UltraHD Blu-ray player, though, supported the keyboard and trackpad quite extensively, allowing point and click across its interface, although the media control keys didn’t work back when playing content. There was also a little latency with the player, although somewhat less than with the TV.

Note, we’re talking tens of milliseconds here, not seconds, so with both devices it remained perfectly usable, so long as you’re not trying to play games which depend on quick responses.

So in short, how much value you get out of the keyboard with your home entertainment system really is going to depend on the devices into which it is plugged.