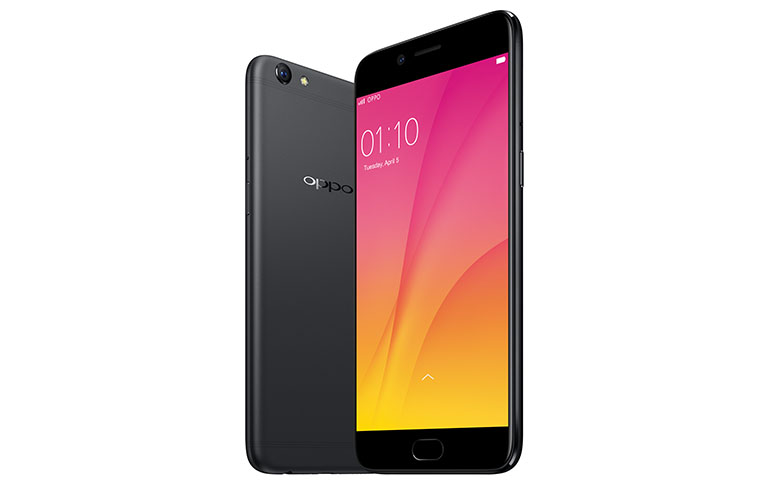 As we mentioned a couple of weeks ago, Oppo has released a version of its premium phone upsized to a six inch screen. Yet despite a host of other premium features, the Oppo R9s Plus manages to come in at just $698.

That’s a mighty big screen, but it’s nicely sharp thanks to the full HD 1080 by 1920 pixel resolution. The phone, by my measurements, is 80.8mm wide and 163.7mm tall and 7.3mm thick. That’s one very flat slab. The screen came to 74.3mm wide by 132.3mm tall, which works out to a screen size slightly over 5.97 inches – close enough to six. The screen occupies 74.3% of the face of the phone (ignoring the phone’s curved corners). There is a camera bump but it would seem to be little over half a millimetre thick.

I loved the screen size. My default screen is 5.2 inches, so the difference is enormous. It’s easy to read and easy to select things on the screen. It is covered in Corning Gorilla Glass 5.

There are two finishes available: one with a soft gold hue to the alloy case, the other finished in matt black (that was the review unit).

The phone supports LTE with a wide range of operational bands, and it includes 802.11ac dual band WiFi. You can load in two SIMs for convenient travel or replace one of them with a microSD card of up to 256GB capacity.

The CPU-Z app confirmed that the phone is running an octa-core Qualcomm Snapdragon 652 processor. Four of the Cortex-A72 cores run at up to 1.96GHz, while the four A53 cores will go to 1.4GHz. The app also says that working memory is 5880MB (which is routinely rounded to 6GB, which is way more than the usual 3GB or 4GB) and has 52.32GB of storage, with slightly over 49GB remaining available after I’d installed my standard minimal set of apps to make the phone usable for me. (The other dozen-ish GB to get the phone up to 64? Locked away for system use.)

The 16 megapixel rear camera employs a Sony IMX398 Exmor RS sensor with dual pixel Phase Detection Auto Focus and a maximum f/1.7 aperture. It also features optical image stabilisation. According to the provided specifications, the maximum video recording quality is full HD at 30 frames per second. In reality you get a choice of 720p, 1080p and 4K. All video modes use the Blu-ray-like MPEG4 AVC (H.264) codec and AAC audio.

The phone runs Android 6.0.1 with Oppo’s Color OS 3.0 overlay. There is a headphone socket. There is Bluetooth and whatnot. But there is no NFC (near field communications) function.

As is Oppo’s practice, the phone comes with a light, transparent plastic or silicon case.

As I think I may have hinted at, I loved the big screen. As deep black as a nice AMOLED one? No, of course not. Black and colourful enough? Absolutely. Cheap looking? No.

In fact, the whole phone looks stylish. Particularly once you replace the bland wallpaper with something more to your taste. The phone also comes with a lock screen slideshow which tends to show pictures of discomfortingly pretty people in addition to pretty objects. All is easily changed through the setup menu.

The Color OS 3.0 variation of Marshmallow has a couple of pointless differences in operation (pinch to bring up the widget editor rather than touch and hold), and at least one change that was simply irritating. Specifically, while you swipe down from the top in the usual way to show the notifications and quick settings icons, these are on two separate pages with the shortcuts showing first. They occupy most of the page and you have to swipe sideways to get to notifications. Nor was there any apparent way to edit them. I like to have the hotspot function there. But it isn’t and can’t be put there, requiring access via the setup menu whenever I want to use that function.

Finally, despite the huge screen, there was no clear way of moving to a tighter grid of icons than the default four across by five down. But there is a choice of five visual styles when you’re swiping from one page to another.

I did like the fact that the return and recent apps keys are the same way around as Samsung phones, reversed compared to the Google Android norm, with return to the right and recent apps to the left. That makes it easier for righties like me to use it one handed.

It’s Oppo’s practice to provide security with unlocking only via pattern or fingerprint, not with a PIN. Its fingerprint sensor seemed to be extremely effective and very fast indeed. Not once, I think, did it fail to unlock when I applied any of the three fingers I’d set up. That raises the question: if there are never any false negatives, might there be too many false positives? You’d need a lab and several hundred volunteers to solve that one. But for what it’s worth, I several times tried starting the phone with one of my fingers that hadn’t been memorised, and I could not get it to respond.

In addition to unlocking, you can associate an app with each finger, so that was useful to a quick start of the camera (or whatever else you might want to get going quickly – perhaps a sound recorder for a reporter).

There are other quick starts as well, invoked by gestures on the standby screen. Draw a circle and the camera opens. Draw a “V” and the flash turns on to be used as a torch.

Incidentally, the home “button” didn’t seem to be a physical button at all, in that it didn’t seem to press in. Somewhat like that on an iPhone, although the vibration feedback didn’t have the feeling of the iPhone’s pretend “click”.

The 4,000mAh battery provides lots of power. As I sit here writing, it is eight hours since I disconnected it from the charger. Since then I’ve made a couple of calls, interacted a bit using various apps, taken half a dozen photos and switched it in on many times to check various things. Yet the battery is still showing 94% charge. Not a heavy usage to be sure, but nonetheless encouraging as to battery life. It is supplied with a fast charger, capable of adding two hours, says Oppo, of talk time with a five minute charge.

As usual, I used the most automated system available to copy details from the last phone. That proved to be the Google “Setup nearby device” routine, which transferred my Google account details wirelessly but left it to me to re-install my usual apps.

Within a week or two of fairly intensive use, I have to report that I found excellent all round performance in every normal area of usage, at least to the level of my usual Samsung Galaxy S6 or S7. That turned out to be not surprising. Using the old Quadrant performance benchmark, the Oppo R9s Plus was much faster in every area of performance than the S6, or for that matter than the standard Oppo R9s. And significantly faster, too, than the Samsung Galaxy S7 in every area except for memory. There it managed only 60% of the S7’s speed.

There is one thing about Oppo phones that has me bemused. That is the strange implementation of “On-The-Go” connectivity. We’ve described how what’s usually shortened to “OTG” works, but in short it allows you to plug various devices into the phone. Typically they’ll be memory expansions, but they can include a mouse or keyboard (or both!) For me, the killer function is the ability to plug in a digital to analogue converter, which allows music to be delivered from the phone to the highest of high fidelity standards – depending on the DAC – rather than having to rely on the phone’s audio abilities.

As with the Oppo F1s and Oppo R9s, the Oppo R9s Plus does indeed support OTG. But as with those phones, you have to switch it on in the setup menu, and it switches itself off again if it hasn’t been used for ten minutes. Yes, it is only a couple of levels down in the setup menu, and one would fast get used to finding it, but it leaves me wondering why there is an auto switch-off at all.

What purpose does it serve? Unless it’s some holdover from a much earlier version of Android, someone at Oppo has apparently sat down and designed a routine that monitors the use of the Micro-B USB port and switches it off after ten minutes of non-use. That takes effort.

Perhaps to save power? But other phones with OTG support don’t seem to have to worry about this. For security reasons to stop some kind of hardware-based hacking of a phone? Again, we look to other phones and find none of them bother.

All that said, I must be one of a tiny minority who insist on the ready ability to connect to a high end digital to analogue converter. The switch on requirement isn’t too troubling if you just OTG occasionally to transfer some files to or from a flash drive.

Despite the nifty Sony sensor and the “fast” aperture, this camera isn’t going to win any tech awards for the best ever. But it proved to be perfectly serviceable, focusing fast and reliably and taking respectable photos, even in moderately low light conditions. To be picky, the colours in the browns and greens seemed slightly less accurate than when compared to my usual Samsung Galaxy S7 (generally regarded the best around at the moment), and in the background they could lack contrast. That was probably a matter of picture processing as much as the sensor. The phone steered largely away from excessive sharpening, allowing a more naturalistic look than with some phone cameras.

There is no RAW mode available. But there is an Expert mode which allows you to make manual settings. In addition a GIF mode lets you take short videos, a Double Exposure mode lets you, well, do that. You can perform panoramic sweeps, have the phone process various tints or black and white into the image and perform time lapse shots. A “Beauty” mode is primarily for the front camera. Try it if you’re interested in beautifying yourself. I’m not sure that phone would pack enough power to do that for me.

The Oppo R9s Plus is a fine phone, with the feel of a premium model, a massive screen of good quality, strong performance, at somewhat of a bargain price. Very impressive indeed.