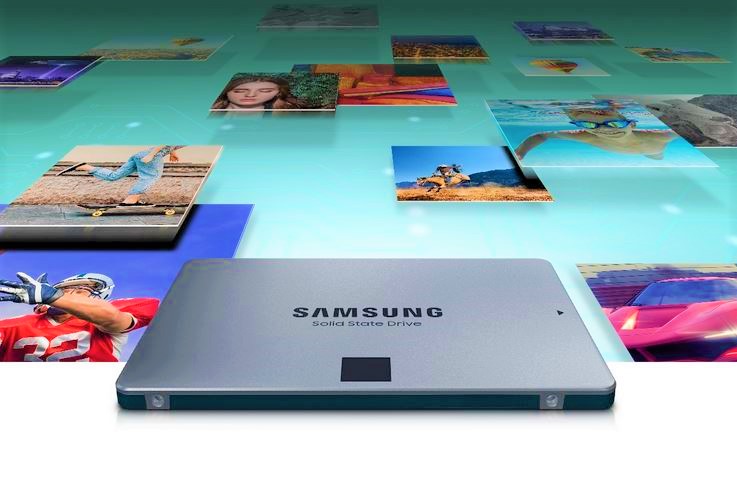 Samsung’s 870 QVO, 2.5″ SATA 6 SSD is the solution to fast mass storage at a reasonable price per GB.

But that statement contains a contradiction. It is like ‘faster, cheaper and better’ but you can only have two of the three. A correct statement is that it is Samsung 870 QV) is mass SSD storage at under 20 cents per GB, but you sacrifice some speed.

We wrote about the Samsung 870 QVO release here, and I won’t repeat that information. Our tests were to see if QLC (quad-level cell technology) V-NAND was any slower than MLC and at what point does the buffer fill up and speed drop.

We sequentially copied (write) 1422 video files ranging from about 300MB to 11GB and totalling over 1TB of data to the drive.

As suspected, it started very well at 390MBps sequential write but after about 200 files (about 80GB) the buffer filled, and it dropped to 163MBps for the rest of the test.

Now, this is a rugged test – very few people copy 1TB in one sitting unless backing up and then this drive is too expensive – an 8TB spinning hard disk costs less than $300 or 4 cents a GB or a 5TB external at a similar price.

Crystal Disk Mark returned 561/471 sequential read/write – this is as fast as SATA 6 allows. Interestingly it did extremely well in larger file sizes as well.

Let get one thing straight. If you are a videographer, render high files or move 70GB at a time then NO SATA 6 SSD will do it for you. Instead, you want blazingly fast PCIe NVMe 3×4 lane like the Samsung 970 EVO M.2 SSD that will give you 3500/3300MBps sequential read/write speeds. These cost about 54 cents per GB!

What is typical use?

Provided you don’t do a lot of sustained >78GB read/writes this is as good as it gets.

I would replace any SATA 6 hard disk Boot drive with a 2, 4, or 8TB Samsung 870 QVO and you will notice at least a 50% boot speed improvement and similar for read/writes.

Or, if you have limited space like in an Intel NUC, it should be the drive of choice.

Here is our guide to a clean install of Windows or a clone install.

Shop around online, and you may bag a bargain if you are not in a hurry to buy.