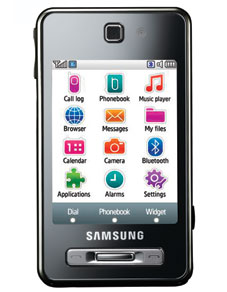 It would be fair to consider Samsung as a relative newcomer in the touchscreen department, and its initial efforts have been patchy at best. Samsung’s first big releases, the Omnia, and semi-touchscreen U900 both left a lot to be desired and didn’t really compare well against rivals from LG or Apple.

So the F480 is an important handset if Samsung wants to get back in the game – it’s certainly got the looks, but does it have the brains?

The F480 is a very, very beautiful phone. Its slim body, compact design, shiny touchscreen and even a leather-like cover and back means this is definitely a winner if style is high on your agenda. It has the outward appearance of a mini-iPhone – less width, less height, but unfortunately a smaller screen too – which only gets smaller when menu bars take up a fair bit of real estate. But although the touchscreen is on the small side, it is backed by some smooth firmware so it scrolls beautifully, responds easily to every tap or gesture, and generally feels well designed.

The interface comes in two parts – the main ‘widgets’ screen, and your typical menu screen found on every mobile. The Samsung widgets screen has appeared on other handsets before, and it’s still not perfect – you select which widgets you want from a sidebar (like clocks, MP3 player, radio etc) for quick access; but it still feels a little unpolished. There’s a slight delay in touch-response when moving icons and scrolling the sidebar, and the 320×240 screen mean it all looks low-res. The idea is good and it’s usable, but still not as quick-and-easy and as touch interface of the Apple iPhone.

The 5.0 megapixel camera is impressive. 5.0MP is above standard for mobile handsets, and it’s doubly impressive in a compact device like the F480. With an LED flash and auto-focus as well as video-record, the camera gets a big tick. The music player is OK – the F480 packs a powerful internal speaker for its size, but the interface needs work – menus when navigating through your music collection are over-simplified, and the lack of a 3.5 mm headphone jack is unforgivable in an otherwise quality multimedia device (even if it does come with its own swanky ear buds).

The web browser is very nicely done, but doesn’t really compare to the iPhone or BlackBerry browsers. It scrolls smoothly and will do the trick for basic tasks, but the limited screen space is made even smaller when two menu bars hog your browsing window.
The thing that lets this very good handset down is a lack of applications. It comes with a stopwatch and RSS reader, voice recorder and video editor, even a document viewer – but these things are pretty standard offerings even in mid-range phones. If you want to access your emails or use mobile GPS maps, the F480 just doesn’t have the functionality.

The F480 is a great value device. It doesn’t have the functionality of its big brother the Omnia, but it’s so much more useable. Other phones in this price range might get you internal GPS and a few additional applications, but it’s a rare treat to get such a beautiful design with solid firmware for the cost.

A 5 megapixel camera is also top of the class among the F480s peers, and the widget menu design (while not done perfectly) is a lot better than other touchscreens for this price.

A beauty with brains. The F480 loses marks for a lack of applications, no GPS, and no headphone jack, but wins on design, ease of use, value and features like the 5MP camera. Take a look at the F480 if you’re happy with what every other mobile can do (like making calls and sending texts etc) but looking for something which will really impress the fashion-conscious crowd.

For the price, the F480 gets that balance right.