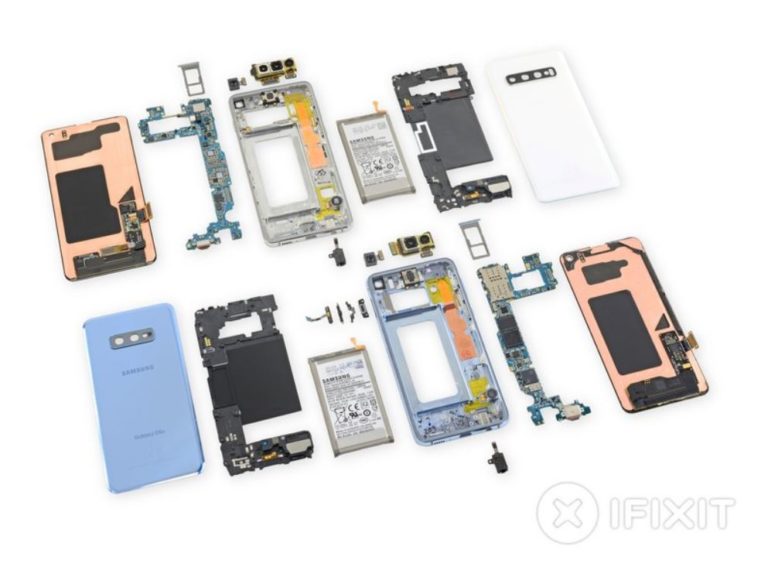 iFixit’s Samsung Galaxy S10 teardown shows a lot of clever tech prefaced by the comment, “It’s a shame to see so much innovation go into hardware that, in the end, is still treated as disposable.”

The Samsung Galaxy S10 teardown (here) shows that the quest for thin, light, water-proof phones results in less and less repairable ones.

There are no surprises component-wise – all three variants use the same Qualcomm 855 or the Samsung Exynos 9820 SoC. All Qualcomm front end technology.

There is a lot more heat dissipation technology including graphite and copper pads and a Vapour Changer cooling system on the S10+. iFixit puts that down to heat generated by the reverse wireless charging. They question if the heat may impact battery life – I think Samsung has that well-covered.

Batteries are replaceable after removing the back panel. Although IFixit says, “We’ve said it before, and we’ll say it again: batteries are consumable and will need to be replaced before the end of just about any modern smartphone’s lifespan.”

The AMOLED displays (with and without an ultrasonic fingerprint sensor) are difficult to remove without damage. Again, one would question why you need to remove them unless they break in the first place. Apart from the need to have an Infinity-O hole for the camera, all the sensors and fingerprint sensor can ‘see’ through the AMOLED matrix display.

While Samsung uses the latest Gorilla Glass 6, it also ships with a pre-fitted screen protector specially designed to work with the ultrasonic fingerprint detector.

Repairability score is three out of ten.

I love iFixit’s teardowns – yes, I am a techy type. It is impressive to see how the tech has been shrunk down to the extent that the RAM is on top of the CPU.

While it is easy to expect smartphone makers to design for easier repairability, in practice thin, light and IP68 negate that.

Teardowns also overlook the whole being greater than the sum of the parts.

Here is a video teardown of the S10+