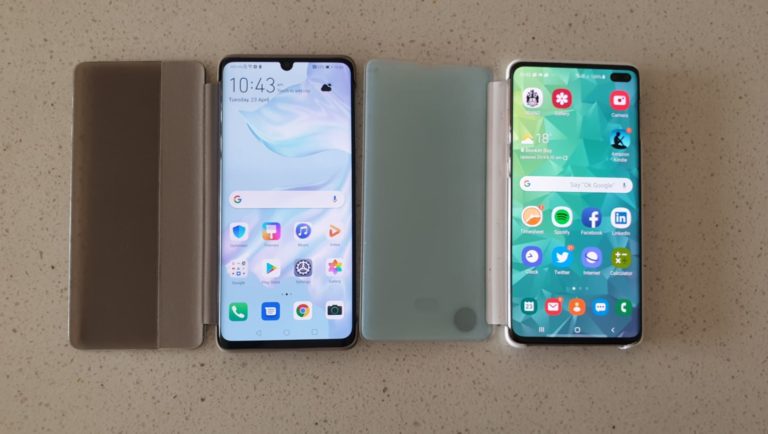 The battle lines have been drawn, and the two Android contenders – Samsung Galaxy S10+ versus Huawei P30 Pro – are in a fight for supremacy. Game of Phones.

It has taken three hard years for this flagship shootout – Samsung Galaxy S10+ versus Huawei P30 Pro – as Huawei really did not have a ‘Samsung killer’ in its arsenal. Read on to see which is the real winner and you may be surprised why.

But Huawei’s assertion does not necessarily make it so.

Samsung has already fought back with its 2019 Galaxy S10+ that exceeds the P30 Pro in many areas except the critical camera. Huawei has a clear winner in zoom and lowlight photography until the Galaxy S10 5G, and Note10 bring out a Huawei beating camera. Then it starts again with the Mate 30 Pro followed by the Galaxy S11+– a bit like Groundhog Day.

I won’t go tit-for-tat, feature for feature and we will not comment where there are insignificant differences, e.g. looks, colour etc.

You can read the full reviews for the Galaxy S10+ here and the Huawei P30 Pro here.

But here are a few areas of difference between the Samsung Galaxy S10+ versus Huawei P30 Pro.

We have a comparison here.

Winner: Samsung by a nose but both devices have tonnes of power.

The Kirin 980 has two AI units but these only work with one core at a time so while it looks good on paper it is only a slight edge. Winner Huawei by a nose.

Both use a Mali-G76. The Huawei has 10 execution cores versus Samsung’s 12. What this means is Samsung has 20% more GPU power to run its 4K screen and for 4K@60fps video. Winner Samsung by a nose

If this is important to you, then it is far ahead of Huawei’s BEO made OLED, 2340x 1080, 8-bit, 16.7 million colours and 75% DCI-P3 gamut. Huawei also suffers from PWM – pulse width modulation – to control brightness. This is not evident to the human eye but shows up as modulating bands across the screen when photographed .

But a screen is a screen and will normally run in 1080 mode anyway to conserve battery.

Winner: If you need 100% accurate colours out of the box (and only photo/videographers will) the Samsung is the one. For everyone else, it’s a draw.

In normal use with a non VHT80/160 Wi-Fi AC router, they will perform similarly.

In terms of rural or remote use, the Samsung has better LTE antenna sensitivity earning it a Telstra Bluetick approval. Huawei does not have this.

Samsung uses an LTE modem with 2Gbps/316Mbps/8CA versus Huawei 1.4Gbps/200Mbps/3CA. Winner Samsung but practically there is not much difference unless you live in remote areas or need that little extra speed or reception strength.

Samsung has a 3.5mm audio jack – most purists will say it wins hands down by that alone. It also has an acceptable stereo mid-sound signature for movies and music and supports multi-point BT audio – two headsets at once.

Huawei has USB-C buds, and while its acoustic speaker display is innovative it’s sound signature is Bright Voice verging on Analytical – fine for a hands-free speaker but too harsh for movies or music,

But if you listen with buds or Bluetooth, then this is a moot point.

Winner: Samsung sounds better and has a 3.5mm jack.

Both have similar batteries – 4100mAh for Samsung and 4200mAh for Huawei.

Both have Qi 15W charging, and the Samsung has 9W reverse charge, and the Huawei has 2.5W.

Qi winner Samsung by a practical mile as it will charge an iPhone in four hours.

So much has been written including a shootout by camera expert Thomas Bartlett that we can confirm Huawei has the best zoom and computational photography night shot. If 5/10/50x optical/hybrid/digital zoom in important Huawei leads until the Galaxy S10 5G and Note10 up the ante again.

For all other photography including selfie, Samsung leads with more natural colours, lower noise, better HDR and video. It also has direct YouTube and social media encoding to upload on the fly.

Winner: Unless you see the images taken side-by-side you will be happy with either.

The main difference is that Samsung has 3D facial recognition versus Huawei 2D – the former is a lot more secure.

Samsung’s ultrasonic under glass fingerprint sensor is faster and more accurate than Huawei’s Goodix sensor – although not enough to be an issue.

Both have Android 9x and similar upgrade policies.

Samsung’s One UI is superb and well developed over many iterations. Huawei’s EMUI is a little different and raw with some rough edges that are steadily being polished off.

While both are not Pure Android, they offer the best overall Android experiences. Winner Samsung because its UI is more polished, works flawlessly, and its non-Google apps suite is better.

GadgetGuy’s take: Which would I buy? Galaxy S10+ versus Huawei P30 Pro

If you have the cash to splash, then it will come down to the camera (Huawei zoom and Night Shot) versus Samsung’s better all-around camera.

As a techy – boring I know – Samsung’s components are ahead of Huawei and that is a key issue. Huawei basically uses all Chinese made components.

Huawei has been very smart to get to true flagship status in perhaps three years (P/Mate/9/10/20) and now can challenge Samsung on a fairly equal feature and price footing. Where is struggles to challenge is the brand!

Huawei is a challenger brand – a Chinese manufacturer seeking a global stage. While people buy Chinese challenger brands like Hisense over Samsung in TV land, it usually it is more about price than features. Samsung in Australia is safe until Huawei is a valued household name (as it is in China).

Me – I think the answer lies in how good the Galaxy Note10 with a stylus is versus the Mate 30 Pro that will have taken every step to beat it. Ground Hog day again.

Where there are significant differences between the P30 and P30 Pro the Galaxy S10 and Galaxy S10+ are almost identical save the extra selfie camera (really for 3D face recognition).

PS – We are a review led website – and in both cases, we sweated over these phones for two weeks. Samsung and Huawei have left these with us to see how they perform longer term after firmware updates.

If readers have any specific questions or comments on either let us know via the Disqus comments.