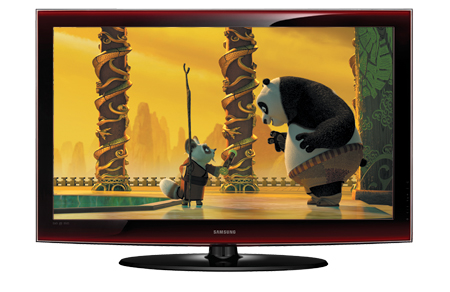 In these reviews I rarely bother to say much about how a TV looks as an object, merely how video looks on its screen. I must make an exception, though, with the Samsung LA46A650 LCD TV. Its resin-infused bezel – nearly black but with a sense of deep red emerging from its depths – will look beautiful in any room.

Fortunately, the video looks pretty damned good on its screen as well.

The TV is more than its resin-infused bezel, and in fact has one of the best feature sets of any TV around, including a USB socket which allows you to view with very high quality JPEG photos, and also play back MP3 music files. There are four HDMI inputs, including one mounted on the side.

The panel offers full high definition resolution of 1920 x 1080 pixels, and includes a ‘Just Scan’ mode which allows 1080i and 1080p signals to be displayed without any scaling, providing the sharpest possible picture from full high definition sources. You get an HDTV tuner built in, plus an analog one. There is also a Picture-in-Picture feature, which only worked with external inputs, such as a DVD player, PVR, VCR or games console.

The performance of this TV was quite wonderful in just about all areas. The only weakness, and then only compared to plasma, were the black levels. Even then they were only noticeable when I sent a full black screen to the TV in the night time with the room lights switched out. In all other cases the blacks were, subjectively, as good as it gets.

The TV has a smooth glass surface rather than the ‘anti-reflective’ surface used by many LCD brands. Despite this, it seemed to control reflections well.

The video processing in this TV was also just about as good as it gets. The Movie Plus 100Hz processing is a motion interpolation system designed to smooth the motion by creating new, intermediate, picture frames which are placed between the actual picture frames of the incoming video. It has three ‘strength’ settings. With Blu-ray the ‘Low’ and ‘Medium’ settings were best. They did not produce any visible artefacts, and provided increased motion smoothness almost all the time. They failed to provide that smoothness in some highly detailed scenes with a fair amount of movement, but in those cases they didn’t do any significant damage to the picture quality. They merely failed to improve it.

The deinterlacing of the picture was good, even with DVD material, and scaling of DVD up to the HD panel resolution was smoothly performed. The built-in high definition digital TV tuner provided simply excellent quality, both with HD stations and standard definition ones.

Incidentally, if you compare the star ratings for this TV to the 52 inch Samsung LA52F81BD we reviewed earlier this year, you will see that the older TV scored 5, but this one only gets 4.5. Has Samsung’s performance gone backwards? Not at all. It’s just that the bar has been raised, that the average performance of TVs has improved even over the course of this year.