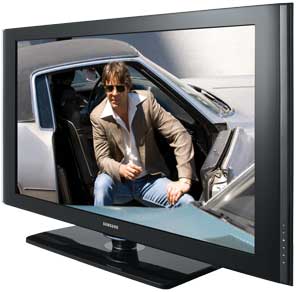 Samsung has taken its LCD TV technology – already just about the best in the business – and made it even better with its high-end LA52F81BD LCD TV.

At $7,149, this TV is certainly not cheap, but it offers high-end performance, a massive picture size and several extra features that make it worthwhile.

The screen of the TV is a huge 132 cm in size – noticeably bigger than a 50 inch plasma – and offers a true high definition resolution of 1920 x 1080 pixels. The panel itself is rated as having a response time of 6 milliseconds to reduce picture smearing during action scenes.

If you’re worried about standby power usage, note that the TV by default has a fairly bright blue LED above its pedestal that glows when the TV is in standby mode. In this state, the TV drew 1.2 watts of power. But you can switch off ‘Light State’ in one of the setup menus to reduce standby power to 0.9 watts.

Samsung doesn’t specify the power usage of this TV, but it actually comes in quite low – for the size of the screen – compared to other recent TVs. Despite this the picture was plenty bright enough. I ran it in ‘Standard’ picture mode, which reduced the power consumption by about 20 percent, and the brightness a little, but still it was fine, and preferable to the default ‘Dynamic’ mode for picture accuracy.

The dynamic contrast settings (not to be confused with the bright dynamic picture mode) were adjustable, and did make a significant difference to the black levels, which were impressive even in my viewing room with the lights dimmed.

The TV did a fine job on scaling DVD images up to its full resolution… and of course an even better job displaying full high definition images. It delivered HDTV, HD DVD and Blu-ray magnificently. With these sources (1080p or 1080i) it offered a ‘Just Scan’ aspect ratio that allowed every pixel of the source to be seen on the screen without any alteration. It also fully supported the highest quality 1080p24 images, providing super smooth cinema-like movement on the screen.

The Movie Plus 100Hz processing allowed greater smoothness from PAL DVDs by generating ‘intermediate’ picture frames. However this did produce some hazy artefacts, even at the ‘low’ setting, with some video program material so I left it switched off.

Samsung LCD TVs, as demonstrated by the LA52F81BD, continue to be the best of the breed I reckon. If you’re after a large TV and have a large budget, have a close look at this one.