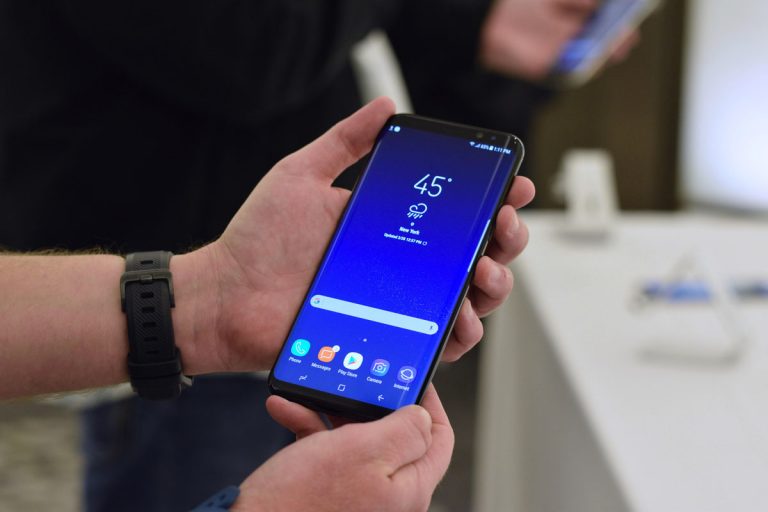 Samsung has officially launched its latest flagship phone, the Galaxy S8 and S8+ at its Unpacked 2017 event in New York. This is an important launch for Samsung considering its flagship mobile sales have suffered this past year, thanks to Note 7 battery fiasco. We were in New York to cover all the details and get our hands on Samsung’s technology.

The most obvious change with the S8 is its design, which features a button-less front and curved screen edges on both models. The screens are bigger as well; the S8 is now 5.8 inches and the S8+ has a 6.2 inch display. However, there’s more to the story than just increasing the screen’s size. While both screens are larger and have a different shape, or aspect ratio, to their predecessors, the case has actually become smaller – so small in fact that the total size of the S8 and S8+ are smaller than the versions they replace, even though their screens are bigger.

Having a smaller phone with a big screen is easier to carry around, fit into pockets, and, according to Richard Fink, Vice President, Mobile Division, Samsung Electronics Australia, “The design of the Galaxy S8 and S8+ are not only beautiful to look at but also fit comfortably in, and are easy to use, with one hand. These smartphones are perfect for our mobile lives”.

In fact, 83 percent of the S8’s front is screen, and to make this possible Samsung needed to drop the physical home button and replace it with a ‘virtual’ on-screen version. Like the new LG G6 and probably the upcoming iPhone 8, Samsung has changed the shape of the screen to make it longer, so it now has an 18.5:9 aspect ratio, rather than the traditional 16:9. This is actually a good thing for movie watchers as the content size is 36 percent larger, meaning that more of the movie will fit onto the screen, with smaller black bars across the top and bottom.

Otherwise, the display is Samsung’s excellent SuperAMOLED technology, with a Quad HD+ (2960 x 1440 pixels) resolution and can display High Dynamic Range footage, and certified for HDR Premium content. This means that you can watch movies with all the colour purity and detail that the director intended.

Another benefit of the larger, longer display is when using two apps at once via the multi-window feature. This is now genuinely useful, as the added screen length means that the keyboard doesn’t crowd the other two windows.

On the camera front, not a huge amount has changed for the rear-facing 12 megapixel camera. It uses the same excellent dual-pixel sensor found on the S7, which produces fantastic low-light photos. However, there are some image enhancements that should improve the results somewhat, although we didn’t get a chance to see this in action. More has changed on the front facing camera, which increases from 5 to 8 megapixels, has a 1.7 aperture and now features a smart auto-focus. This means that the camera can now lock on to faces in selfies and group selfies regardless of the distance you hold the phone away from your face.

The S8, like the S7 is dust and water resistant to the IP68 standard, so no changes here. Also the same are expandable MicroSD flash memory, always on display, wireless and fast charging, and KNOX security layer are there too, plus the headphone jack has miraculously survived!

On the biometrics front, however, there are some additions: the fingerprint scanner moves from the home button to the back of the unit near the flash, and we see the addition of both iris scanning and facial recognition for unlocking your phone and accessing locked folders. We anticipate that the iris scanner will work in a similar way to that of the Note 7, however, we didn’t get to see the facial recognition system in action.

Also, while the Galaxy S7 was capable of very fast mobile data transfers on Telstra’s 4GX network, supporting Cat 9 LTE with a max download speed of 450 megabits per second, the S8 is one of the first in the world that can download at scorching 1 gigabit per second (category 16 LTE).

The familiar S Health app has been evolved into the Samsung Health service, which now covers the full journey from improving your daily health habits to teleconferencing with a health professional for a consultation. At time of writing, we’re still unsure when this feature will come to Australia, but we like the idea of connecting you to a doctor and sharing your health data.

A big new feature for Samsung is the new ‘intelligent user interface’, called Bixby. This is a virtual assistant along similar lines of Siri and Google Assistant, however Samsung is attempting to make it different in a number of ways.

First is that there are Bixby enabled apps that will let you do anything that you could via the touch interface with your voice. There will be a few native ‘Bixby-enabled’ apps at launch including Camera, Contacts, Gallery, Messages and Settings. There’s also the new Bixby Home screen, which contains relevant info ‘cards’ to help you with your day, sort of like Google Now. The service can  analyses your behaviour to remind you of things you regularly do such as calling your wife on the way home from work. The image recognition feature is a clever tool for shopping, getting information about places and searching for images.

Bixby is also has context awareness, meaning that you can talk, tap and type in a continuous matter. For example, you could say “open gallery”, then select an image with your finger, and then say “send this image to Justin”. Bixby knows what you are currently doing including the app you’re in, and can figure out where to go from there.

Bixby is meant to have more ‘cognitive tolerance’ which is the flexibility to achieve correct outcomes even though it might misunderstand a few words in the process.

Lastly, there’s a dedicated Bixby button on the S8’s left hand edge, so one would assume that Samsung is betting on Bixby as its Voice Assistant platform for the long term.

During our demo of Bixby, it seemed to understand voices quite well, and the ability for it to anticipate what you might need based on the app you are in or what you are doing is impressive. Samsung says it plans to open Bixby up to 3rd party developers in time, but for now it’s limited to native Samsung apps. Also, for Australia, Bixby will undergo some language training to get up to speed on our accent and lingo.

The new S8 will connect to the Samsung Gear ecosystem including some the other devices announced today. It unlocks the new Gear VR with Controller, which powered by Oculus and enables one-handed control and navigation in the virtual world. connect to the new Gear 360 to create 4K 360-degree videos and 15MP photos.

Also, Samsung has released the new DeX dock for the S8, which transforms it into an Android based PC. Essentially, the S8 has so much processing power that it can perform many desktop tasks without you needing a separate computer. All you really need is a phone, keyboard and mouse, which is what plugging the phone into the dock gives you.

All of the S8’s apps will run in desktop mode, and Microsoft’s Office apps like Word, Excel and PowerPoint look nearly identical to their desktop counterparts.

The dock provides two USB ports, the HDMI connector for an external monitor, power and an Ethernet plug, and there’s even a cooling fan that switches on when it senses that the S8 is getting too hot. The DeX dock is priced at $199.

According to Samsung, the Galaxy S8 will have a RRP of $1,199 and Galaxy S8+ will be $1,349. While there are a couple of other colours, Australian customers can choose between Midnight Black, Orchid Grey and Maple Gold.

There’s also a great bundle offer for early adopters and customers: “Customers who pre-order the Galaxy S8 and Galaxy S8+ from Samsung… or one of its operator or retail partners will receive a complimentary new model Gear VR with Controller and a $50 Oculus content voucher.

“Customers who pre-order the Galaxy S8 and Galaxy S8+ in the first few days of the pre-order period could receive their bundle from April 21, making them among the first in the world to receive Samsung’s innovative new smartphone,” said Samsung Electronics Australia.

Valens Quinn travelled to New York to attend the Unpacked 2017 event as a guest of Samsung Electronics Australia.