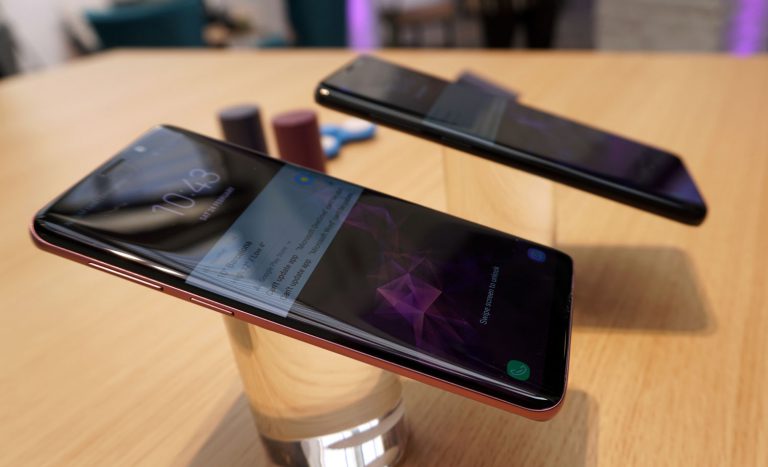 The S9 and S9+ look quite similar to the S8's that came before, but there are subtle differences.

Samsung has taken the wraps off its latest Galaxy S9 and S9+ smartphones at its Unpacked 2018 event in Barcelona.

With over 1.2 trillion photos taken in 2017, the S9 models are focused on giving consumers more of what they love, a great camera experience, along with enhanced entertainment as well as connectivity.

Visually, the S9 and S9+are similar in size and appearance to their S8 and S8+counterparts. The S9 comes with a 5.8-inch display, and the S9+ a 6.2 inch, and both have similar cases to the S8s, with curved screen edges and a sleek profile.

It’s also good to see that the S9s retain their IP67 dust and water resistance, fast wireless charging and headphone jack. Expandable MicroSD card memory has been increased from 256GB to a massive 400GB, which, when added to the 256GB internal memory of the top end models, adds up to 656GB of potential storage.

It’s all about the camera

The new camera system in the S9 brings a few new mode: Super Low Light, as well as Super Slow Motion video recording. The new dual aperture 1.5 and 2.4 lens system lets 28 percent more light hit the sensor, meaning that the camera can perform even better in low light than the S8, which was already very good. This also brings faster low-light auto-focus, where otherwise, the focus system would need to spend time hunting for something to focus on.

Added to this is a new multi-frame noise reduction process where 12 pictures are taken at once and combined to deliver the best possible clarity, and reduced ‘graininess’ in low-light photos. Compared to the S8, the system is said to reduce noise by 30 percent.

With the demo that we saw, a photo was taken in very low – nearly dark – conditions. The result was a sharp photo that looked like it was taken in near daylight settings. We’ll continue to test the S9’s low light performance for a full review to be published next week.

And to help you time your recordings perfectly, there’s an auto-start feature that lets you define an area on the screen that will trigger the recording once movement is detected in that zone. We tested out a recording of a water balloon breaking, and the results were spectacular.

Bear in mind, however, that to use the auto-start feature, the phone should be stationary and any movement within your selected zone will trigger the recording, so it’s only useful in certain circumstances.

Otherwise, once you create your Super Slo-Mo recordings, you can convert them into GIFs to share, add music to them, or set them as your wallpaper or lock-screen artwork.

While Apple’s iPhone 8 and iPhone X introduced the ‘Animoji’ idea, which is a 3D ‘avatar’ that matches your facial expressions, and that you could record and send to friends, the S9 has a more personalised take on it.

Samsung’s new AR Emojis, use Augmented Reality to create a personalised 3D avatar from your own face. You can then customise your avatar’s look, give it a haircut, add glasses and outfits.

The face tracking consists of 100 points of difference, and it can create 18 different facial expressions, that can then be mapped to your keyboard. Rumour has it that there will be other Avatars added later, but for now, it’s just the ones that you create.

Bixby Vision also sees some enhancements. It can analyse your photos to translate text, such as a menu or sign, to other languages in real time. The new Food Calorie mode lets you take a picture of, say, a chocolate-glazed doughnut, and it will tell you how many calories it contains. This will undoubtedly be a big hit with the health-conscious and dieters alike. The Calorie feature won’t be available at launch in Australia, but it will make an appearance fairly soon afterwards, we’re told.

Sound-wise, the S9 phones have 1.4x louder speakers than the S8 models, and now feature Dolby Atmos support. This creates a 360-degree sound effect, and it’s tuned by audio specialist AKG. During the demo, there did appear to be better separation of sounds to the left and right of the phone, however, it was tricky to get the 360-degree effect from our vantage point and is something we’ll investigate in our full review.

While it wasn’t immediately obvious, the S9’s new ‘immersive infinite displays’ have become a fraction taller than the S8 models. This also means that the bezel sizes have been reduced, so more screen takes up the front of the phone. While their curved Super AMOLED displays have the same Quad HD resolution as the S8s, their aspect ratio has increased to 18.5:9, versus 18:9. We found that the display looked excellent, with vibrant colours and pin-sharp clarity.

To make the most of the new screens, the S9s can now be used in landscape mode from the home menu as well as app tray. There’s also support for the screen’s edge to display messages while watching a movie, and they all fit onto the screen at the same time.

On the communication front, the S9’s will be the first to support Category 18 LTE. This means theoretical download speeds of up to a blistering 1.2 gigabytes per second on Telstra’s network.

There are 3 different colour choices available, including midnight black, coral blue and lilac purple, and your choice of either 64 or 256GB of internal memory.

Pre-sales in Australia start on February 26, and the S9s go on sale on March 16.

More details on pricing and specifications are included in the tables below.

Valens Quinn attended the Unpacked 2018 conference as a guest of Samsung Australia.