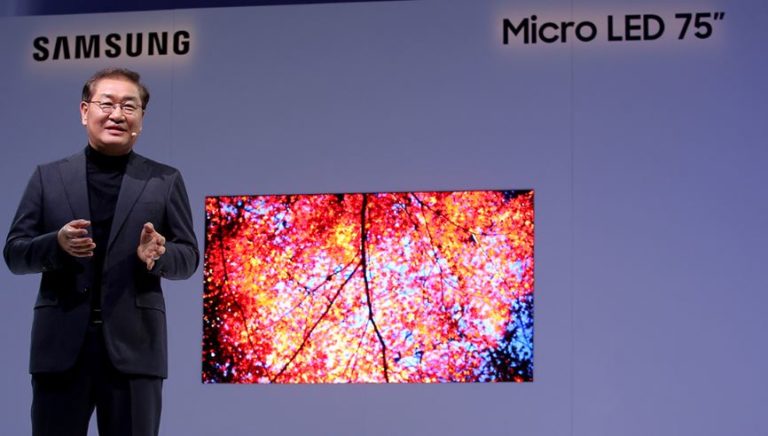 At CES 2018 Samsung showed the world its massive 146” Micro LED display – the Wall. At that time, it said the technology would be available for sale later that year. It also showed off its 8K QLED TVs.

Well, Micro LED Wall is back at CES 2019 with a 75” and a massive 219” 4K resolution panel offering stunning picture quality and design flexibility – and it is still not for sale except for specific commercial uses.

“Samsung leads the way in next-generation display innovation. Our Micro LED technology is at the forefront of the next screen revolution with intelligent, customisable displays that excel in every performance category. Samsung Micro LED has no boundaries, only endless possibilities.”

Micro LED comprises self-emissive (no backlight) Micro LEDs made from inorganic red, green and blue (RGB) tiny LED chips that emit their own light to produce brilliant colours on the screen. Samsung claims it delivers unmatched picture quality that surpasses any display technology currently available on the market.

Micro LED uses thin, edge-less panels that can fit seamlessly together to make almost any sized display. The Micro Led panel magnetically attaches to a back panel that contains the TV smarts and can be attached to a wall.

Samsung did say this time that it may be two to three years before this technology becomes available and it won’t be cheap.

Whether a viewer is watching content through a streaming service, set-top box, HDMI, USB or even mobile screen mirroring Samsung’s proprietary AI-based technology recognises and upscales any content, regardless of the native resolution, to near pristine 8K quality.

In 2019, Samsung Smart TVs offer more ways to search for content and more compatibility with connected devices than ever before. With an improved AI algorithm that leverages a user’s subscription services, favorite content, and TV viewing habits, the Universal Guide makes it easier for users to find the perfect show for them to watch. Users also have more options than ever to quickly and easily find and control their favorite content with just their voice by using new Bixby and the AI Remote as well as even more ways to control their Samsung TVs through Amazon Echo and Google Home.

OLED has lead the pack for several years now as the best TV panel for true blacks and colours. It is self-emissive technology just as Micro LED is.

It is too early to comment or call Micro LED the OLED killer as there are some very influential companies like LG behind that technology and I can’t see them dropping the ball. Competition is good for us all.