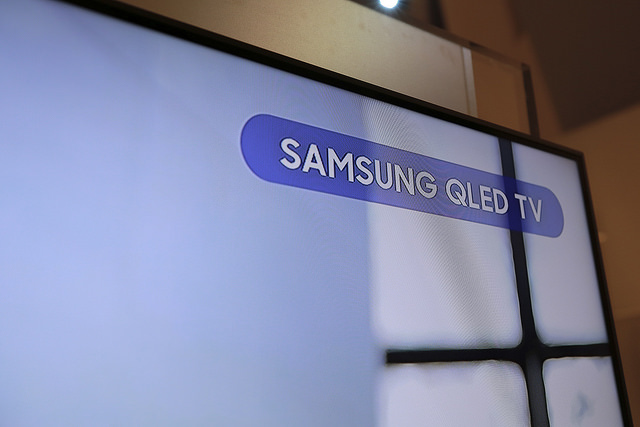 Samsung is probably very happy that 2016 is over. With its Galaxy Note 7s and washing machines spontaneously catching fire, many eyes are on Samsung at the 2017 Consumer Electronics Show in Las Vegas to see how it plans to win back consumer confidence. On the bright side, Samsung’s TV range hasn’t suffered any issues this past year, and 2017 looks to be a big one for the Korean brand.

Back in 2015 we saw the introduction of Samsung’s top of the range SUHD TVs, which featured Quantum-Dot technology. This year, Samsung is replacing SUHD with QLED. The Q in QLED stands for Quantum, and it’s an advanced version of this technology that now features a new metal alloy that improves a number of things.

The net result is a brighter, more colourful and higher contrast picture. For example, on conventional LED TVs, as picture brightness increases, a red apple will start to appear pink. In the case of QLED, the red stays red, and actually becomes even more vibrant, not washed out. Samsung’s QLED panels can display 100 percent of the DCI P3 colour space, which is the same ‘palette’ that movie studios use and has considerably more colours than what can be broadcast over Australian free to air TV networks.

The QLED panels are very bright too, increasing from the 1000 nits brightness rating of last year’s models to between 1500 and 2000 nits peak brightness. This means that you can see a great picture, even in very sunny living rooms.

Another benefit of QLED is that it greatly improves the colour brightness and purity when viewing the screen at sharp angles, which was an issue present on previous Quantum Dot displays.

While the picture is impressive, the QLED range sees some great improvements on the outside too. You can now mount the TV flush with a wall with its new near-zero wall gap design.  There are also two attractive stands to choose from depending on your tastes. The Studio Stand resembles a painter’s easel and the Gravity Stand has a modern and sleek sculpture-like appearance.

There’s also a nearly invisible fibre optic cable that connects the TV panel to a separate box that houses all of the HDMI and USB inputs. This cable looks like fishing wire, yet it combines all of the signals into a tiny 1.5mm diameter cable, and is a great option for hiding messy cables when wall mounting your TV.

Samsung has updated the Smart TV features including an enhanced ability to automatically recognise, configure and control the devices you connect to it. And if you don’t want to use the supplied Smart Remote, you can use your smartphone with new and improved Smart View app. This lets you view and select all of the content on your TV, receive notifications and reminders. The Smart View app is available for both Android and Apple smartphones so you don’t need to own a Samsung phone to use it.

At launch the QLED range comprises the top of the range Q9 models, followed by Q8 and Q7 series, with models appearing for sale in Australia in the first quarter of 2017. Pricing and the sizes per series are still to be determined.