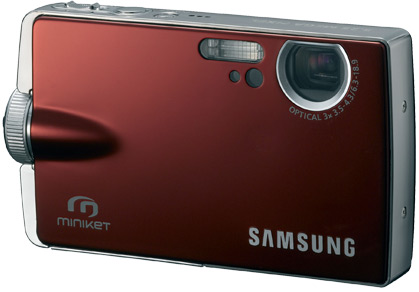 Samsung’s Miniket Photo is a camcorder with a difference, reports David Hague.

There are those who will scoff at the Samsung Miniket Photo, saying that such a device cannot be treated as a serious camcorder. Then there are others who will embrace this six-in-one unit as the gadget of their dreams. I am somewhat in the middle of these two extremes – I can see where it has a place in the scheme of things video-wise, but certainly I wouldn’t use one for serious work.

So what exactly is the Samsung Miniket Photo?

Well depending upon your primary use for such a gadget, it is a camcorder, 5.25 megapixel digital still camera, a music player, voice recorder, web camera or 512MB storage device. The Miniket Photo is tiny, weighing in at around 120 grams (without the battery pack) and very reminiscent in its body style to the early Casio digital still cameras.

Each of its six functions is accessed by a rotary dial on the side of the Miniket; other major controls are a button to access an onscreen menu, a combination OK/Joystick button, power on/off, shutter release and zoom controls.

Down the right-hand side of the LCD screen are four tiny buttons assigned with ‘short cuts’ to common functions, and a fifth ‘display’ button that, depending upon the number of times it is pressed, switches between showing onscreen the icons for the shortcut buttons, the focus frame or displaying all of the onscreen icons. At this point the LCD becomes a very busy workplace indeed as, for example, when in Photo Capture mode, there are a total of 24 icons ranging from the scene mode indicator, to date/time and a shake warning (among others).

In the Movie Record mode there are 17 icons, including remaining time, self timer indicator, battery life and elapsed time.

The operation of the Miniket is simplicity itself; choose a mode, turn the Miniket on and then select whatever options are available as required. In the Movie Record mode, this would involve simply pressing the record/stop button (which doubles as the shutter release in still mode) to start recording, and pressing it again to stop. Of course, you can select the button next to the LCD in order to turn on all of the onscreen icons and achieve finetuned control over your recording.

Video is recorded in MPEG4 format at 30 frames per second and with the standard internal memory there is enough space to record up to 30 minutes of footage. And while the majority of these sorts of devices record in QVGA mode (320 x 240 at 15 frames per second), the Miniket Photo allows double this, with resolution of 640 x 480 at 30 fames per second.

In still mode, images up to 2592 x 1944 pixels can be captured and are good enough to be printed out as A3 prints. Speaking of printing, the Miniket Photo sports PictBridge compatibility so there is no need to download any stills to a computer for later printing if you have a PictBridge compatible printer. To aid in clarity, you can turn on or off an anti-shake system. This performed quite admirably in use, and a built-in flash is there for when the lighting conditions are less than stellar.

There is a 3x optical zoom (and in still mode, an extra 15x digital zoom) if you need to get closer and more personal to your subject matter. Playback can be made to an external device such as a TV via a simple single-pin to three-pin cable carrying the video and stereo audio.

Finally, there is a slot in the bottom of the Miniket Photo with which the shooting time or the number of stored images could be extended via an SD card.

As a music player, when the memory is taken to the theoretical maximum Samsung maintains the 1GB unit can store 250 songs. These claims figures have always bemused me, as what time length exactly defines a song? I doubt, for example, you’d get 250 versions of Iron Butterfly’s In-A-Gadda-Da-Vida (all 17 minutes of it)!

Auto-synching with PC-based playlists is available and in playback, you can select either random or repeat play for selections. Uncommonly, you can either choose to listen to your music via headphones (buds supplied) or through the small external speaker. I suspect most would choose the former.

The Miniket Photo is very useful as a voice based note taker. I currently use a Sony digital voice recorder and the quality of the Miniket’s playback is superior. Out in the field when shooting, having one of these devices is invaluable for recording shooting notes, time codes and so on (almost acting as a director’s assistant) and the ability to also quickly grab stills or video of the shooting environment is a bonus in my opinion.

Again this is a useful option and dispenses with any need to carry extra USB sticks around, although these days, what is in effect a 512MB storage device may not be big enough for many! There is also the security angle to consider; later generations of USB memory have pretty tight security built into them and, here, your data would be available to anyone who has a hankering for picking the Miniket Photo up and simply plugging it into a PC.

Overall, for me, I would treat the Samsung Miniket Photo as a device I’d keep in the car’s glovebox for emergency use. It is small enough and fast enough in operation to be able to quickly grab it and shoot of some video or still shots of a ‘happening’ – anything you might suddenly come across that was unexpected. And it is indeed possible that if the aforementioned happening was newsworthy, at 640 x 480 resolution, a television station may even accept such footage – they’ll take webcams from tanks in Iraq so why not? And 5 plus megapixel is more than sufficient for glossy magazine prints.

As mentioned at the start, many may see the Miniket as the only camera/camcorder they’ll ever need, with the music, voice and data storage abilities a bonus. At $699 it’s reasonable value for money as well. One criticism is that the documentation could be improved on; there was no mention in there for example that the Miniket could be USB charged.