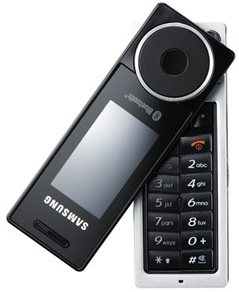 Samsung’s swivel phone, the SGH-X830, is a phone lacking in complexity – a fact that will appeal to many. It’s a basic GSM/GPRS phone with added MP3 player. It does support email, WAP and Java, but given the size and shape of the screen, you’re mostly going to be making calls and listening to music on it.

The X830 comes with 1GB of internal memory, enough to store about roughly 200 music tracks. You can also store photos on the phone – downloaded or taken with the internal 1.3 megapixel camera – as well as any other types of files you may want to store on it. Using the supplied USB cable, the X830 can act as a mass storage device, equivalent to a USB memory stick.

Samsung has tried hard to sell the unusual swivel mechanism of the X830. It’s neither a clamshell nor a slide phone – instead the screen pivots sideways to reveal the number pad. It’s spring-loaded, so you just have to start the process and the phone flips open. The style is meant to evoke spy movie glamour, but the effect will be ruined every time you have to pause to try and figure out on which axis the phone opened again, or to finish off the movement after the phone failed to swing all the way open.

The X830 is an unusually narrow phone – so narrow that the numbers are arranged in two columns instead of the usual three. The buttons on the keypad are so good, though, that this is hardly an inconvenience. In fact, we quickly found texting much quicker in this configuration. The downside of the slender profile, however, is that the display doesn’t support a lot of text across the screen, and consequently reading long messages (like emails) tends to be a chore with all the word wrapping that goes on. The aspect also makes taking photos and capturing video a challenge.

The phone may be narrow, but it’s also deep, giving it a certain blockiness and a tendency to pooch the line of one’s jackets. A slimmer profile would have done wonder for its aesthetics. On the subject of aesthetics, you can (if that’s your thing) get the phone in a variety of bright colours, from a manly black to bright pink.

The phone’s interface eschews fanciness for simplicity – with excellent results. It’s fantastically easy to use the core functions of the phone. The phone doesn’t have a huge array of extra features beyond core messaging and MP3 playback – but for most people that’s all is asked. Samsung keeps it simple with the X830, and it pays off in terms of the phone’s usability. Most of the functions are accessible using the rotary clickwheel (similar to the wheel in the iPod, though not nearly as good).

When it comes to music playback, things are a little more complicated. You can organise music by playlist, artist, album, recently played music and so forth. This level of music organisation is a rarity in mobile phones, and is comparable to that found in dedicated music players. Unfortunately, we found ourselves fighting against the interface more than once. The central clickwheel controls all music playback, with mixed results. It took some serious work to get used to navigating and selecting music using just the flimsy-feeling wheel.

That said, there’s a goodly amount of memory built into the Samsung, though it’s not expandable. The memory can store music, pictures, video, your voice recordings or any other type of file you care to put on the phone. The PC software that comes with the phone is very good, supporting synching with Windows Media Player playlists and music. The phone can appear as a drive in Windows Explorer to which you can drag and drop files – and one of the handy things is that you don’t have to arrange music and images in files and folders on the phone. Just dump everything in the one directory and the phone will sort out the details for you.

The music sounded a little flat with the supplied earbud headphones – they’re not a touch on the headphones supplied with the iPod for example. The phone does come with a 3.5 mm headphone adapter (and also supports Bluetooth headphones), so investing in a new pair is recommended.

While we were impressed by the Samsung’s musical organisation features and simple (if Spartan) interface, the design of the phone leaves a little to be desired. Sure, the swivel mechanism seems cool, but it’s the kind of phone where you feel something could snap off or fail at any moment. The narrow screen makes certain functions difficult to use and the phone can’t be recommended for anything beyond making calls and listening to music.

On the upside, it performs those tasks pretty well. It has a serious music player onboard, with proper playlist functions and use of the ID3 tags embedded in music tracks (so you can play music by album or artist, for example), which puts it a cut above many other phones advertised as having MP3 support.