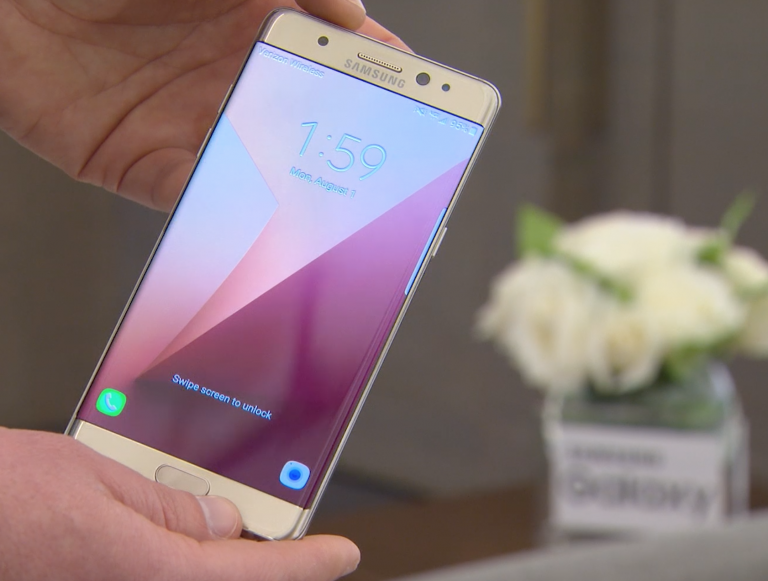 Samsung has taken the wraps off its latest mobile, the Galaxy Note7 today at the Unpacked 2016 event in New York.

In keeping with the productivity focus of the Note models before it, the new Note7 includes the familiar S-Pen, or stylus, along with an extra large 5.7 inch Quad HD screen.

In fact, the Note7 shares many similarities with Samsung’s very good, very successful Galaxy S7, which was announced earlier this year. Appearance-wise, it even looks very similar to the S7, and also gains a similar dual curved-edge display.

Also good news is that the Note7 gets the same excellent 12 megapixel dual-pixel camera, which is undoubtedly the best low-light performing camera available any mobile phone on the market today, and one of the fastest focusing devices.

Samsung has carbon-copied the S7’s processor, so the same powerful 8-core unit is featured on the Note7.

However, there are some notable differences which set the Note7 apart, and we’ve had a chance to get our hands on it for a quick test drive.

Starting with the S-Pen, which is at the core of the Note’s identity, this is now smaller and more precise than the Note5 to improve the look of sketches and drawings. It’s half the diameter of the previous S-Pen, at just 0.7mm, and can detect 4096 separate pressure levels.

And as the Note7 is now water and dust resistant to the IP68 standard, the S-Pen can now also be used on a wet screen. in fact, you can even write on with the S-Pen with the phone completely submerged in water.

There are also improvements to note taking, the best of which is that you can simply start jotting down a note without powering on the screen or firing up the Memo application, and the note will stay visible on the new ‘always on display’. In essence, this allows you to use the phone like you would an actual notepad.

Samsung has also organised and grouped many of the S-Pen’s applications together, making it easier to find the functions that you want.

And there are two useful additions to the S-Pen’s suite of apps. One is a real-time translator, where words that you hover over are instantly translated, via Google Translate.

The new drawing app supports colour blending, so for artists, you can now mix your colours together to create more realistic looking sketches and artwork.

The other is a screen magnifier, which allows you to use the stylus like a sort of magnifying glass while hovering over text and images. You can zoom up to 300 percent.

Lastly, there’s a great little tool for creating animated GIFs with the S-Pen. You simply draw a marquee box around a video that you’d like to convert into a GIF and record up to 15 seconds. You can then edit your recording, and then share it via social networks.

An existing new addition to the Note7 is a new biometric: an iris scanner. This means that the device has a special infra-red camera included that can quickly scan your iris to ensure it’s you that’s using it.

After a quick calibration, you can simply hold the phone at eye level to unlock the device. The actual iris scan itself takes about a second, which is marginally slower than the fingerprint scanner.

While you can’t wear glasses during the initial setup, iris scanning will work when wearing glasses, and is a great way to unlock the phone if you’re wearing gloves or with wet hands.

Then there’s the additional security that an iris scan provides. Also, you can nominate and lock a folder which will encrypt its contents and can only be opened with a positive eye-scan.

You can still use the fingerprint scanner if you wish, and Samsung’s Knox security is also available to safeguard apps and data.

Big news is support for High Dynamic Range (HDR) Video streaming. HDR is the next big thing when it comes to video, and allows you to see movies the way the director intended, with fantastic colours and  contrast.

With support for the new Vulcan gaming API the Note7 will come with a $US25 game pack so you can experience 3D graphics and console like gaming on your mobile.

These titles will start launching this year.

On the battery front, there’s a 17 percent larger 3500miliamp battery than old Note5, so hopefully we’ll see a bit more life from the new model.

Samsung has moved to a USB-C type charger, which is becoming the industry standard way of both charging and transferring data to mobile phones.

On the memory front, a healthy 64GB of memory is included, and you can expand the memory with the MicroSD card slot by another 256GB, making a total of a massive 320GB of storage, which is great for a productivity-focused phone.

The Note7’s symmetrical design means that the same extra scratch-resistant Gorilla Glass 5 is used on both the front and back of the device, and it’s also 2.2mm slimmer than its predecessor.

Colours choices in Australia will include Black Onyx, Silver Titanium and Gold Platinum.

There are also a number of new accessories including a clever S View Flip Cover, which doubles as a media stand.

There’s also a fantastic pre-order offer to customers who pre-order the Galaxy Note7 between August 5th and August 18th who will receive a bonus Samsung 256GB MicroSD card valued at $299.