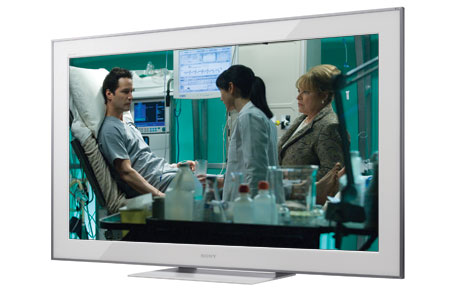 The Sony Bravia KDL-52EX1 is an excellent LCD TV with a very large screen and high performance when you use a wired connection to the panel. The TV performance is excellent as well. But for its wireless convenience and styling, you do pay a very large premium.

Sony’s ultra-thin Bravia KDL40ZX1 LCD TV isn’t the only model from the brand to use wireless communications. The EX series TVs do the same. In fact, the only significant difference between the two is the panel, because both employ what appears to be the same ‘Media Receiver’ external TV tuner and switch box.

The main purpose for having this in the KDL52EX1 TV isn’t to keep the TV thin, although at 57 mm it is remarkably thin. Instead, the main reason seems to be to avoid the ugliness of cables, although of course you need a power cable.

In practice, this TV makes the ideal wall-hanger. Being relatively thin, and devoid of most connections, it would look a million dollars properly installed. It comes with a white bezel, with narrow aluminium frame at the edges, and to my eyes looks utterly gorgeous. That does tend to make the dark screen stand out more when the unit is switched off, but the TV has a ‘Picture Frame’ mode, in which it can display your photos from a USB memory stick, statically or as a slide show.

The TV has plenty of inputs on its Media Receiver to accommodate a range of video sources (the panel itself has one HDMI input to supplement the wireless communications). The Media Receiver also features both analog and digital TV tuners.

One other radio-type wireless part of this TV is the remote control. Infrared is not employed, which eliminates line-of-sight demands, so you can put the Media Receiver away in a cupboard (two IR remote control ‘blasters’ are included to control other Sony equipment, via the TV’s remote control). It goes some way to replicating the convenience offered by Bravia Sync, which allows compatible Sony equipment connected over HDMI to be operated by one remote (the one belonging to the TV or Blu-ray player for instance), and once I got used to not having to point the thing at the TV, I found it became even more of a pleasure to use.

How this TV performs depends very much on what you are watching, and whether your external sources are directly connected to the panel, or through the Media Receiver.

DVDs and Blu-ray were variable though. The same situation arose with the 40ZX1 and it is all to do with the wireless connection. This uses 1080i as its format, even if you have your DVD player or Blu-ray set to output 1080p. If you have your Blu-ray player connected to the Media Receiver, you can’t even use the smoother 1080p24 output format at all.

Sony has long-championed the benefits of 1080p24 compatibility (the ability to display a film at its original frame rate), integrating it as ’24p True Cinema’ to all its recent-model Blu-ray players and even its new entry level Bravias. Its absence, then, is likely a limitation of the particular radio frequency technology used rather than a failure by Sony to implement it.

The TV panel has quite a bit of video processing built in, however, so it attempts to restore the full 1080p image after transmission, and the results were sometimes very good, sometimes quite poor. In particular, some 1080i50 material from the increasing number of Blu-ray discs in that format were not handled at all well, with visible instability on fine picture detail.

Fortunately the direct HDMI input to the panel accepted 1080p24 and other forms of 1080p and delivered a fine performance. Even though I am not a great fan of the motion smoothing features of most TVs, Sony’s ‘Motion Flow 100Hz’ version generally gave good results, with a minimum of artefacts and a more natural overall look to the picture, even with 1080p24 from Blu-ray.

Once again, the colour was excellent, and the black levels were very good as well, and quite even. Subjectively, blacks were even better than usual thanks to the contrast against the white frame around the TV picture.

The Sony Bravia KDL52EX1 is an excellent LCD TV with a very large screen and high performance when you use a wired connection to the panel. The TV performance is excellent as well. But for its wireless convenience and styling, you do pay a very large premium ($1,700) over the more highly specified KDL52Z4500.

Still, I could see it fitting very well into my home.