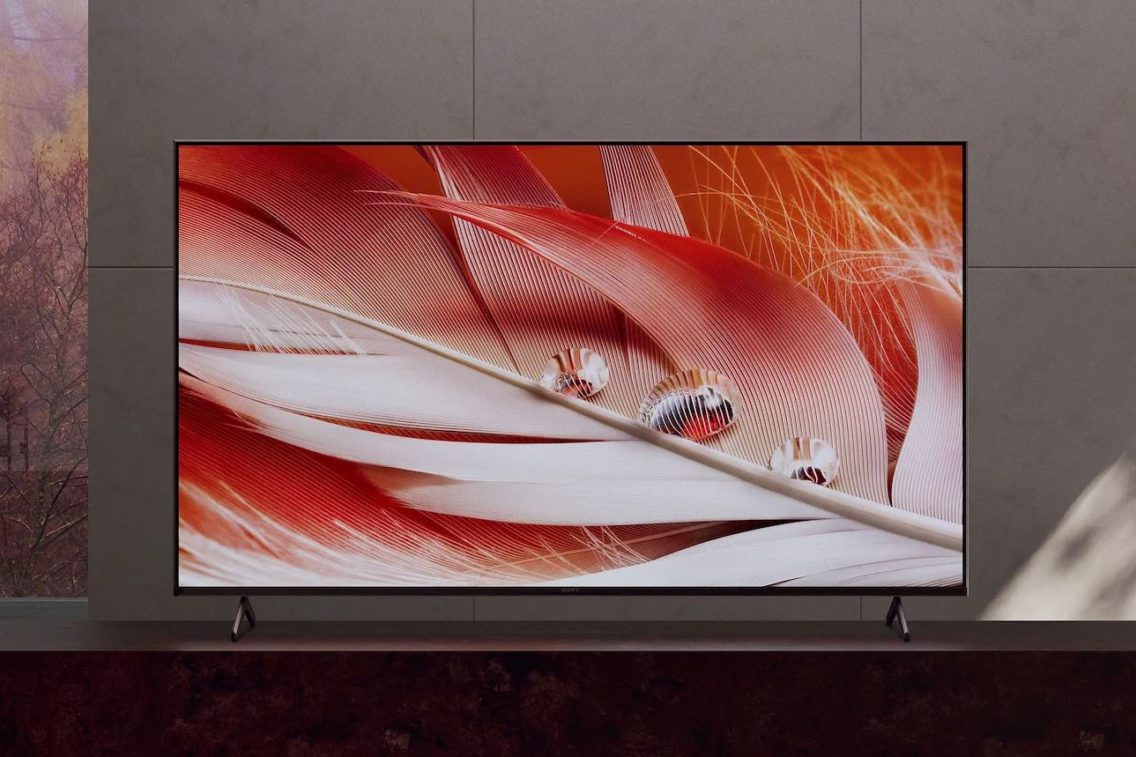 Before we review the TV, we need to get a few terms straight. Sony is the master of making up names like Tri-Luminous, its version of Quantum Dot (other names are QLED, ULED, NanoCell etc.). BTW – Sony doesn’t make TV panels. While we know which companies it buys from (and they are reputable, well-known ones), it focuses on the electronics, acoustics and smarts that make Sony TVs just that little bit different – better.

Yes, it just another marketing name, but it essentially means that it uses machine learning to analyse zillions of images and know (AI) what humans expect that colours, contrast and brightness should be in any frame.

Not to take away from Sony, but LG, Samsung, and Hisense have similar AI processors, and we cannot detect any real difference in 2021 TVs. Perhaps more important is that it has Netflix Calibrated Mode. Other video presets include Vivid, Standard, Cinema, IMAX Enhanced, Game, Graphics, Photo, Custom, Dolby Vision Bright, and Dolby Vision Dark. Frankly, Standard is the best all-rounder.

First impressions – more than you expect

The review was overnight at a Sydney CBD hotel. That means we cannot do the more complex testing that we do at our facilities. Still, it is enough to be confident (or otherwise) of its abilities.

First, the media had a Sony technical staff overview of the range’s capabilities. This involved the 55″ Sony Bravia XR X90J in the centre with two comparable ‘anonymous’ 55″ TVs on either side. I like ‘shoot-outs’, and Sony was fair –  factory defaults for all. All ran off the same 4K video generator splitter, and the anonymous pair were both top-brand edge-lit Quantum Dot models selling around the same street price. The only unfair comparison is that the X90J has a full-array backlit so, it will be naturally brighter.

Let’s just say that the TV on the left was the edge-lit Sony X80J, and it put up a great showing against the X90J. For the lower price and features (like Dolby Vision/Atmos), the X80J is a real winner. The TV on the right paled by comparison. What should have been punchy Quantum Dot colours, brightness and sharpness was inferior to the edge-lit X80J and further below FALD X90J. And it did not support Dolby Vision either.

After the demonstration, we tried to amp up the TV on the right to get it closer to the others, but even at maximum colour, brightness, sharpness etc., it was still visibly inferior.

Many TV retailers do not do ‘shoot-outs’, putting all similar models/sizes side-by-side for comparison. And that is because some brands will not allow it, or the retailer risks financial penalty. All I can suggest is that you try to be objective, perhaps take a smartphone photo of each screen and rate TVs on image quality.

GadgetGuy has prepared two guides to buying TVs. The Dummies Guide is a simple overview of the top 10 things to look for, and the Techies Guide is a very deep dive into the technology.

As mentioned, it is impossible to test everything in a hotel room environment. Many of the results are empirical (observed) rather than backed by tests.

We use the same tests on all TVs to ensure consistency. The TV is first factory reset to standard defaults.

We connect it via an HDMI 2.1 cable to a 4K@60Hz powered dock and a Samsung Galaxy Book 2 Windows on ARM hybrid tablet capable of Alt DP 4K@60Hz output.

Then we run the full suite of 4k ©Calibración HD BT.2020 tests and 4K SMPTE Colour Bars and photograph the results with a Samsung Galaxy S21 Ultra smartphone in 108MP mode with HDR and flash off. For zones and motion, we use a battery of YouTube 4K video tests recorded in 4K by the smartphone. For audio, we use a sound meter an Advanced Spectrum Analyser at 1m from the TV.

Finally, we test Dolby Vision and Atmos via Netflix Star Trek Discovery Season 1 Episode 1 for its richness of non-primary colours (a challenging test as most TVs can only do primary RGB quite well).

Upscale – excellent even from 576p

Sony uses AI to recognise objects and adds a mix of pixels that match the object and surrounding pixels to remove pixelation issues. While 576p is a stretch, it does that well with just the faintest soft text.

It is capable of reproducing almost the whole gamut of 16.7m colours. Primary colours (RGB) are accurate, and secondary/tertiary are natural.

We could not test for Delta E and colour gamut, but we understand that out of the box, it is 1.2 (<4 is excellent) and meets about 90% DCI-P3. That is great for a TV at this price point.

Our colour gradient tests (from 0-100% in RGB and secondary colours) were excellent. It was a smooth gradation showing little banding evident on most TVs.

You have two main measurements – at SDR levels (standard dynamic range – TV) and HDR (High dynamic range – streaming and Blue-ray). In standard mode SDR, you can expect well over 500nits, and in Vivid, it reaches 800nits – excellent. In standard mode HDR, you get 800nits, and in Vivid mode, it is close to 1000nits. Note that Vivid mode loses a little colour accuracy but who cares? Aussies like bright saturated colours.

This is bright enough to defeat high ambient light in any open-plan Aussie lounge room.

Contrast – the difference between the blackest black and whitest white

Local dimming and blooming – above average

We counted 24 separately controlled dimming zones (8 x 3) which fairly typical of a FALD screen. Blooming is where white overpowers surrounding dark areas like with captions. There is some (that is inevitable with any LCD technology screen), but it is way less than expected.

Both grey and black uniformity (absence of a mottled effect) are even with a slightly lighter band towards the right screen edge.

Our only minor criticism is that the VA panel lacks a wide viewing angle. This is a TV to sit relatively straight-on to. We estimate that colour shift, washout and brightness occur after moving about 30-40° off-angle, e.g. a 130° viewing angle. IPS panels and OLED have wider viewing angles.

In many respects, that is due to its Samsung sourced VA panels. Some Samsung models have a Fresnel lens (bends light like a lighthouse lens) to widen viewing angles, but it ends up impacting their brightness, contrast and sharpness.

It has a typical matte screen, but direct reflections (perpendicular to the screen) are quite evident. The hotel room had a mirror on the wall opposite the TV, and we had to cover it during tests. Otherwise, reflection from within the tighter viewing angle is relatively low.

Gaming – good and you would pay much more to get better

We could not measure input lag, but Sony claims 10ms which is very low.

We understand that VRR and ALLM (gamers terms) is coming in a future firmware update.

In Australia, our electricity is at 50Hz, so you may see 120Hz advertised, but it is 100Hz here. It uses a mixture of AI and Black frame insertion to smooth out potential tearing from fast-moving objects. It can also upscale Motionflow to 120Hz. We did not see any judder or stutter on any content.

Ports – it has two of the all-important HDMI 2.1

It has left and right stereo 5W each down-firing speakers and two 5W each crossover-tweeters. It can reach 80dB but with evident distortion. Drop back a few dB, and it is under control. Sony claims it has a voice follow feature, and yes, the voices do appear to come from the person/location, but it is not as immersive as its OLED Surface Audio on-glass actuators.

It has Standard, Dialog, Cinema, Music, Sports, Dolby Audio modes. Here I prefer Dialogue as it ups the late-mid frequencies for clear voice in the absence of a centre speaker.

It can decode Dolby Atmos (5.1.4), Dolby Audio (5.1) and DTS and downmix to the stereo speakers, but you don’t get any spatial sound. It will pass through all audio formats to a soundbar over the HDMI 2.1 eARC port.

As it has Dolby Atmos, you would benefit enormously from a soundbar. See our Dummies guide to Dolby Atmos – vastly simplified (one page) and, if you are inclined, our technical deep dive guide here.

This has hints of mid-bass building to 100Hz, and it is then relatively flat to about 5kHz, where it gently declines to 16kHz and then drops off the chart. In other words, it has nailed the important 100Hz-10khz to give a pleasant, well-rounded sound. It is Bright Vocal (bass recessed, mid/treble boosted), and the presets can give it either a little more bass or treble – but not both.

If you want to know more about this, read Why is a sound signature so important for reviews? A GadgetGuy Guide

Android TV 11 – now called Google TV is the most widely used TV operating system well ahead of Samsung Tizen and LG web0S. That means it gets all the apps first, so you can count on all streaming services and a good amount of utility apps (media players, even PIA VPN).

Google TV has more of a focus on content recommendations than specific streaming or FTA services. And its focus is a form of advertising based on what it learns that you like. It is not intrusive, and you can minimise that by not linking to your Google account.

The TV can also act as a smartphone hub and supports Google Assistant via the remote control (press to speak, which is best for security).

It has Chromecast, Alexa and Apple AirPlay 2 support.

The relatively flat back means you can use any standard 300 x 300 VESA mount or fork out an eye-watering $500 for Sony’s telescopic SU-WL850 bracket – excellent but total overkill.

A power use screen sticker was absent. It will be above edge-lit and well below mini-LED and OLED.

I have a fondness for the Sony remote that has remained functionally equivalent for over 15 years – with the centre navigation when etc. It now has four streaming keys. It is straightforward to use.

No recording to USB or external SSD. It will play most DRM protected content over USB.

The Sony Bravia XR X90J is an excellent FALD LED/LCD TV comparable with Samsung Q80A (no Samsung TV supports Dolby Vision) or LG Nano91 (Dolby Vision/Atmos). Given you will likely want Dolby Vision that rules Samsung out as it only plays that in HDR10 – movie only adjustment instead of frame by frame (vastly better).

To get better, you would have to go to an:

Then you take build quality into account. I have a 15-year old 1K Sony TV that is still as good as the day I bought it. Generics – expect 2-3 years with odd exceptions for 4-5 years. Sony lasts.

And finally, it does Dolby Vision and Atmos correctly – you get close to what the filmmaker wanted. Low-cost generics have to compress the decoding to suit the panel quality.

In the end, it is all about what you can afford because while a generic panel may fail a good number of highly scientific tests, the picture will look good enough anyway. Is the Sony X90J performance and picture twice as much as a cheapie – you bet.

We rate the Sony Bravia XR X90J as a mid-range TV with Dolby Vision and Atmos. It meets or exceeds (some by a significant margin) all our test parameters. It starts then at 8/10 as we add points for HDMI 2.1, Google TV, great out-of-the-box colour and contrast, and Sony build quality. Apart from the lesser  VA panel viewing angle, it is a perfect TV for Aussie families and big open plan lounge rooms.