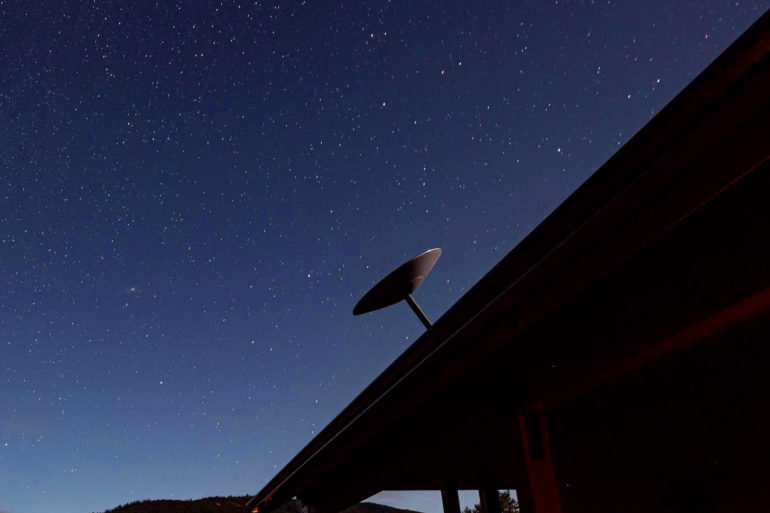 If you don’t know, Starlink is an Elon Musk of Tesla and SpaceX fame company – and has been testing its low-earth-orbit (LEO) satellite internet service on 400 Aussie guinea pigs. And they are pretty happy.

Starlink’s ultimate aim is to bring Internet access to anyone, anywhere in the world. This is made possible with some never before seen technology. First, Starlink consists of a ‘constellation’ of satellites that orbits the earth. There are 1,735 of them up there already, and with more than 12,000 planned.

Yes, it’s true that there are other satellite-based internet services, including the NBN’s own SkyMuster. However, what makes Musk’s Starlink different is the sheer number of them, and that they reside in low earth orbit. This makes high-speed Internet access possible, and very low latency connections. So, with Starlink you could watch a 4K movie, make a video call or play online games with others around the globe, just like you can with cable-based NBN. Only in Starlink’s case, you could be in the middle of the outback, sailing 100kms off the coast or at a research station in the Antarctic (once the system is complete). It can open up new possibilities such as being able to relocate to a nice cabin in the bush without needing to worry if there’s good internet. There’s no other commercially available satellite service that can get anywhere close to this – and that’s why it’s so revolutionary.

Also, it’s worth mentioning how difficult and expensive it is to put thousands of satellites into orbit. It’s handy then that Musk owns his own rocket company, SpaceX, which has pioneered reusable rockets. This is where the rocket’s first stage returns to the launch pad to be launched again. (The current record is 10 launches from a first stage, which could increase soon.) Reusability is the key to dramatically reducing the cost of each launch, which can put up to 60 Starlink satellites in orbit. Starlink’s competitors, such as the upcoming Kuiper Project funded by Amazon, do not have this advantage.

Before you throw out NBN, remember that this is a test, and it is only available in parts of rural northern Victoria and southern New South Wales. Why? Starlink’s roll-out plan was to cover North America first and more satellites are needed to envelope the great southern land.

It is an enormous life-long project, and we are just starting.

From what we can gather, Starlink will be a great option for providing high-speed, low latency internet access to rural and remote locations, where you can’t get fixed NBN services. It’s not intended to replace what we already have in cities and more dense urban areas. Still, it should eat NBN’s satellite service for breakfast!

The trials have a unique Aussie flavour. Will the satellite dishes withstand 40-50° heat? Will the Cockatoos eat the wires (to the house)? And will those savage 200kmph winds blow it down? The biggie – the Australian Communications and Media Authority (ACMA) has only granted a beta test licence for ‘low and remote density areas’.

How much will Starlink cost?

The roof-mounted satellite dish/kit is A$709 plus $100 shipping and handling. The minimum charge (no speed guaranteed, but it mentions unlimited data) is A$139 per month. On top of this is qualified/licensed roof fitting, cabling and termination indoors, plus a suitable router and Wi-Fi home network. Starlink clarifies that it requires a 100% 360° unimpeded field of view to the sky and may require pole mounting to clear other homes or obstacles. While it may sound like a lot, the costs pale in comparison to running cables over long distances or suffering from dial-up like speeds.

Governing Law – For Services provided on Mars or in transit to Mars via Starship or other spacecraft, the parties recognize Mars as a free planet and that no Earth-based government has authority or sovereignty over Martian activities. Accordingly, Disputes will be settled through self-governing principles established in good faith at the time of Martian settlement.

I think those terms are fair. If it works, then great, but early adopters need to understand that this is nowhere near a commercial service yet.

Will it kill NBN?

No, and the ACMA will make sure of that. However it might just make NBN’s Skymuster satellite service obsolete. NBN is the best way by far to get 50Mbps+ broadband, but access is limited in remote areas. Rural communities will no longer need to build the infrastructure for cable internet when they can just beam it down from space without the current compromises of satellite services.

Initial Australian Starlink speed tests range from 50Mbps to a maximum of 350/45Mbps/45ms (download/upload/millisecond lag). Because satellite coverage is so sparse over Australia, there can be lengthy outages when no satellites are overhead. Starlink states that latency should reduce to under 20ms, and speeds increase to 300Mbps with enough satellites. The initial plan speed is likely  100-150Mbps, and it should be fast enough for most, including gamers.

This is much faster than the NBN Sky Muster that offers about 25Mbps top speed and limited data caps as its 2 satellites are 36,000km above the earth.

Most of Earth [coverage] by the end of year, all by next year, then it’s about densifying coverage.

This is the first of many articles as ‘densifying coverage’ occurs. For now, it is little more than Aussie meat pie in the sky. But you can be sure we will be requesting a ‘review’ unit.