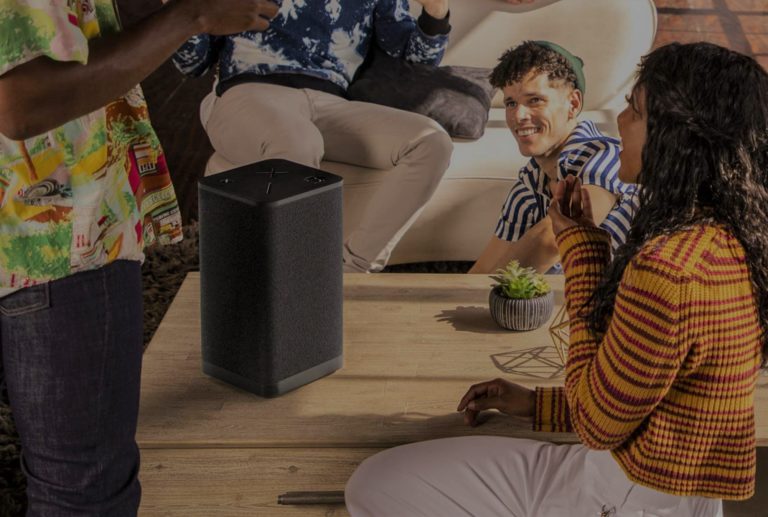 The Ultimate Ears HYPERBOOM is a radical departure from its typical Coke can waterproof speakers. It has six times the bass of its MEGABOOM 3, and it is a stereo ‘desktop’ speaker.

Who better to lead a ‘guided tour’ of the Ultimate Ears HYPERBOOM than Doug Ebert, Global Principal Product Manager of Logitech (owns Ultimate Ears). He assures me that the company has not run out of marketing superlatives for future models! He also says that over 50% of the BT speakers sold here are his brand.

It is loud and has tonnes of bass- equally at home in the lounge room or at a very loud party. It stereo pairs (it is a stereo speaker) to another HYPERBOOM and can PARTYUP with BOOM, BOOM 2, BOOM 3, MEGABOOM, MEGABOOM 3 and HYPERBOOM. You can read GadgetGuy reviews here.

It is more a niche product than its other 360° speakers so it risks being overlooked in this new category – don’t!

It is quite large rectangle at 364 (H) x 190 (square) mm x 5.9kg. It is IPX4 rated (X means not tested for dust incursion, and 4 means water splashing against the enclosure from any direction shall have no harmful effect) – no it is not rainproof but will withstand an errant beer or wine.

The secret sauce is dual 114mm woofers, and 89mm tweeters forward angled at 90° (this has a 270° sound stage) as well as two massive 190mm passive radiators at the rear.

Anecdote 1: It produces so much bass that initial prototypes kept loosening the acoustically transparent fabric on the rear-facing panels. A new and unique formulation glue stops that.

Anecdote 2: The prototypes kept walking off the table due to the bass vibration on its feet. Dozens of footpad materials failed. In the end, a sculptured triangle similar to soft mountain climbing shoe sole on each corner fixed that.

BT 5.0 means around a 50metre distance from the BT source. It has a One Touch Music control that can switch from BT 1 or 2, 3.5mm Auxiliary and Optical sources. It can stream from Spotify and Apple Music (plus others based on region).

Awesome. In a brief hands-on it managed 85dB (rated to 100dB), and bass kicked in strongly at 50Hz with a flat frequency response (good) to about 16kHz. The app allows for EQ adjustment.

I did not measure THD, but even at 100% volume, there was negligible distortion – perhaps a little treble harshness.

Doug Elbert sums up the sound, “It’s music quality and volume that makes you want to get off the couch and dance!”.

It has an adaptive sound feature that adjusts the sound to the environment.

Unlike Ultimate Ears BOOM style, 360° sound Coke cans this has a definite front/left/right orientation. It could benefit from being placed in a corner or near a rear wall.

There is no mistaking the design brief for this product and the lengths the designers had to go to, to achieve it. Up to six times MEGABOOM 3 bass, 24-hour battery (and power bank), lots of audio inputs and maintain the Ultimate Ears sound pedigree.

In fact, I think it exceeds that sound pedigree – its damned god. We hope to review it soon.