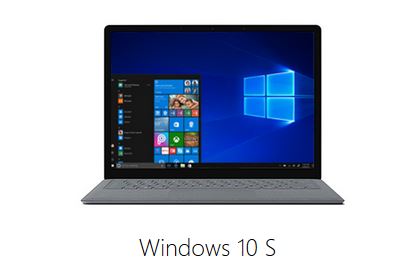 Windows 10 S was Microsoft’s answer to rival Chrome – a locked down, secure operating system – that was ideal for education and home user markets.

It was a full Windows experience except that apps could only be downloaded from the Windows Store (to reduce virus/malware/support); it strongly encouraged you to use Edge Browser and Bing Search; and it only loaded the parts of the OS that you needed making it faster to boot and increasing battery life.

But judging by the number of free Windows 10 S upgrades to the full version (apparently almost everyone) the demand for a ‘crippled’ Windows was just not there.

Soon it will simply become ‘S Mode’ that can be selected as part of Windows setup and it will be equally easy to switch back to full mode at no cost or reloading the operating system.

Microsoft predicts that the ‘majority’ of home users will select S Mode if only for added security.

In his blog, Joe Belfiore, Corporate Vice President of Windows, said, “Customers love the security, faster boot time, better battery life and consistent performance over time. Our partners have brought to market more than 20 devices with Windows 10 S enabled. We have also heard feedback that the naming was a bit confusing for both customers and partners.”

Microsoft was, as usual, pilloried, for introducing a ‘crippled’ Windows. It was no different from Apple macOS and iOS or Google Android in that these require you to use their app stores too if you want to avoid nasties.

And the ‘S’ version did load appreciably faster and give better battery life.

What Microsoft is doing now is adding more freedom to education, home and enterprise users enabling them to ‘flip a switch’ to enter S Mode and enjoy the benefits.

Power users and inveterate Microsoft haters will continue to use full mode or Linux respectively.