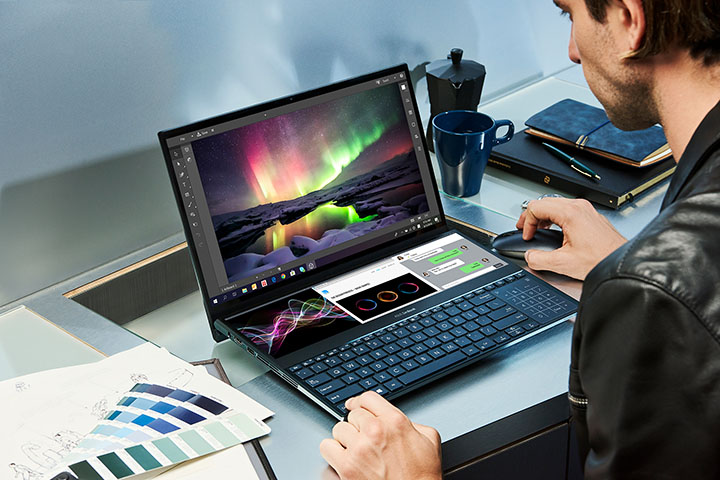 The Venue, Alexandria, Sydney – 9 October 2019: Taiwanese computer (now) heavyweight, Asus, launched its new Zenbook Duo Pro computers in Australia at a swanky event celebrating the company’s thirtieth year. We reported on the Zenbook Duo Pro back in May. Now they’re here and we have prices. Actually, quite surprising prices.

You will recall the big thing from ASUS in 2018 was the ScreenPad – a combination touchpad and FullHD display. You could set it up as a numeric keypad, run videos in it and so on. This year the ScreenPad 2 added functionality, was easily editable (like a smart phone) and has been included in models across the ASUS range from the relatively affordable Asus VivoBook S15 (Model, S532, prices starting at $1,399) to the Asus ZenBook Edition 30 (model UX334, priced at $2,799) with its hand stitched pearl white Italian leather finish.

The “Duo” tag is for the additional half-screen each unit carries, just above the keyboard. It’s like a giant ScreenPad. The ZenBook Duo has a 14-inch full HD LCD screen that occupies just about all of the underside of the notebook lid. The screen to body ratio is 90%. The secondary screen is the same width, but less “tall”, so it comes to 12.6 inches. Its resolution is 1,920 pixels across but only 515 pixels tall, so I guess it’s a little less than half a screen. This almost-half secondary screen is touch sensitive, but the main one isn’t. When apps are dragged into it, they can snap to fill the whole thing or a chunk of it. In my quick play, it seemed to like putting them into halves and one thirds of its width. But when you start to drag an app, an icon box opens up with a few options. Drag the app onto the “Full screen” icon and it expands to fill both the main screen and the secondary one. In other words, it comes to occupy a screen of 1,920 by 1,595 pixels.

Since the top of the keyboard area is occupied by that secondary screen, there’s not room at the bottom for a touchpad or ScreenPad. No matter, there’s a touchpad (in portrait orientation) to the right of the keyboard, located where the numeric keypad would by on a typical 15-inch class notebook. This even has physical “mouse” buttons.

The most startling thing about the Asus ZenBook Duo is its starting price: $1,699, although prices can go rather higher when it’s optioned up.

It’s with the Asus ZenBook Duo Pro that things go a bit wild. The entry level pricing is $4,499, although that would be with a lesser processor than the 10th Gen i9-9980HK processor, available at the most optioned-up level. The ZenBook Duo tops out with an i7.

The ZenBook Duo Pro ups the whole screen thing an enormous amount. First, the main screen is 15.6 inches, so there’s more space to use. Second, it’s 4K (3,840 by 2,160 pixels), so there’s more detail within that space. Third, it’s OLED. Asus says that it covers 100% of the DCI-P3 colour gamut and has a contrast ratio of 100,000:1. I’d quibble with that last figure because if it’s a proper OLED implementation, that understates things. OLED ramps smoothly down to full black, so mathematically the contrast ratio is, well, infinite. It’s also Pantone Validated and VESA Certified, so I reckon colour ought to be pretty accurate.

Unlike the regular ZenBook Duo, the main screen is touch sensitive. It manages an 89% screen to body ratio.

The secondary screen has a 14-inch diagonal, with the “4K” (3,840 pixel) horizontal resolution and a slightly-more-than-half vertical resolution of 1,100 pixels. It uses LCD rather than OLED technology.

Yes, you can spread one app across both screens, but the secondary screen really is best used as a, well, secondary screen. The launch event was called the Asus “Creator’s Extravaganza”, and a number of applications were highlighted, including a several from Adobe. These supported things like having timeline controllers and mixing panels down on the Duo screen, leaving the main screen for the main action.

The Asus ZenBook Duo Pro also has a touchpad to the right of the keys. It’s a little larger (and you press it down to invoke the “mouse buttons”), and it doubles as a numeric keypad. Tap a marked area at the top right, and numbers appear.

Asus offered some impressive battery performance figures for the ZenBook Duo (not the Pro): up to 16 hours with the ScreenPad (ie. Secondary display) on, and up to 22 hours with it off.

Asus certainly seemed to be confident about battery life. After the main presentations, another area of the venue was opened up, revealing forty-some notebooks open and operating. None of them was plugged into power. I went and checked on them after a couple of hours of a couple of hundred people pawing over them. There were 23 Asus Duo or Duo Pro computers (the rest were other models). Several of the Duo Pro models had switched themselves off. Most of the rest had between 7% and 25% of their battery remaining. That’s the cost of powerful performance.

As for the regular Asus Duo computers, all were still working, and all had at least 60% of their battery remaining, with most at around 75%.

I don’t know about 22 hours, but a longer battery life than most certainly seems likely.