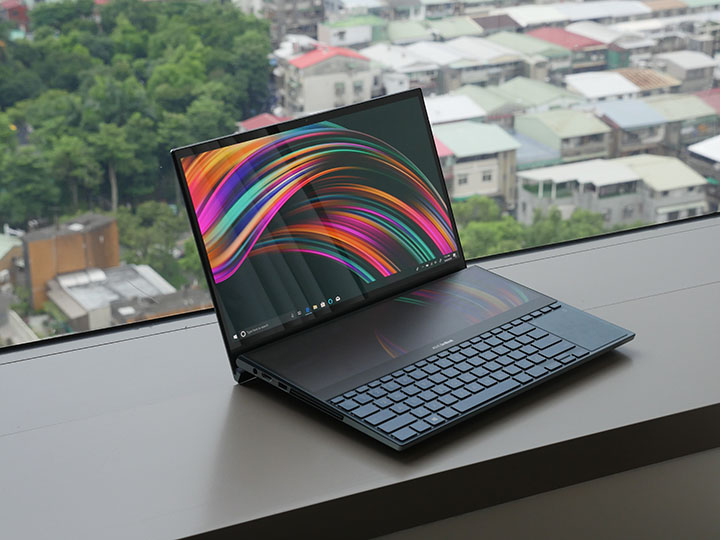 Last year ASUS teased us with a dual-screen clamshell notebook computer. That has still yet to appear (probably never). Instead, this year ASUS is launching a far more practical product, the ASUS ZenBook Pro Duo. With a screen-and-a-half, it is a great productivity enhancer, while still having room for a real, high quality keyboard.

Let me describe it. The formal model number is UX581. The lid of the notebook houses a screen in just the same way as lids of a thousand predecessors have housed screens. The body of the notebook has a regular keyboard, just as a thousand models before it have. But the keyboard is shifted down towards the leading edge, leaving the back half of the computer body free. Well, not so free because it’s covered by a half-height display.

At the launch, a wag suggested that the other display is an expanded version of the MacBook Pro Touch Bar. Um, no. It is a fully functioning display (apparently not OLED) with the same horizontal resolution as the main display – 3,840 pixels. But it has only a little more than half the vertical resolution at 1,100 pixels.

With that resolution, it can display two full HD screens of information side by side.

I’ll return to that, but said wag did have part of a point. In addition to being an additional display, it’s a controller.

Last year we reported on ASUS’ introduction of something called the “ScreenPad” to some of its premium notebooks. As you will recall, the regular touchpad was replaced with a small display that still acted as a touchpad. It could show control buttons, a calculator, numeric keypad or simply display material from certain apps. ASUS has decided to call this new half-height display the “ScreenPad Plus”. In keeping with that, this additional display is not merely a second view on your work. The display can show shortcuts and control functions. ASUS emphasised how in video and sound editing software, things like the main control functions and, perhaps, timelines could be kept in the bottom display, leaving the main display free for the main program material.

Of course, the secondary display is touch sensitive. So is the main display. You can drag applications from one to the other. If you drag, say, a Word document or Excel spreadsheet from the main display to the ScreenPad Plus, it will snap into the screen so as to fill it entirely. Or you can have it occupy the left or right half of the screen. You can have three apps showing side-by-side across it.

Or you can combine this additional display with the main one to make a single large display of 3,840 by 3,160 pixels, albeit with a horizontal bar across it two thirds of the way down. ASUS includes the unfortunately-named ScreenXpert software, “a wide selection of useful apps, tools and utilities that allow users to easily enjoy the efficiency benefits of ScreenPad Plus”.

I far prefer this arrangement to the teased unit, which had full displays at both top and bottom. That would have meant a virtual keyboard on glass for typing, and that is simply far less satisfying – usable, even – than a real keyboard with real spring-loaded keys. Which is what the ASUS ZenBook Pro Duo has. In my brief play with a physical unit, it was pleasing under my fingers, with good feel, adequate travel and a nice feeling of solidity. That would most certainly not have been the case with a virtual keyboard on glass.

To the right of the keyboard is a NumberPad. This is kind of like a ScreenPad, but far more basic, being monochrome and roughly the size and shape of a numeric keypad. That’s its main non-touchpad function. The backlit numbers will be welcomed by those who find themselves frequently punching numbers into their computer.

The two touchscreens support a stylus, one of which is bundled with the Zenbook Pro Duo. Also bundled is a wrist-rest, which is styled to match the computer’s keyboard.

Final specifications of the on-sale versions have yet to be formalised, but the ASUS ZenBook Pro Duo will be available with processor options up to an 8 core Intel i9 processor. And memory options of up to 32GB RAM. Two displays? Seems appropriate for them to be driven by a real video card. An NVIDIA GeForce RTX 2060 GPU is fitted. Storage is a 1TB PCIe 3.0 SSD.

The ports include Thunderbolt, while wireless communications are via 802.11ax, aka Wi-Fi 6.

Bundled with the ASUS ZenBook Pro Duo are a palm rest and an active stylus.

The starting price is expected to be $4,999 in Australia.

Some months after the availability of the ASUS ZenBook Pro Duo we’ll also see the ASUS Zenbook Duo (UX481). This follows the same overall scheme, but the main display (this one is non-OLED) has a 14 inch diagonal and offers full HD resolution (1,920 by 1,080 pixels) rather than UltraHD. No price has yet been set for this model.

You should be able to read about the ASUS ZenBook Pro Duo at ASUS by the end of the week.

(The writer attended the ASUS launch in Taipei, Taiwan as a guest of ASUS.)