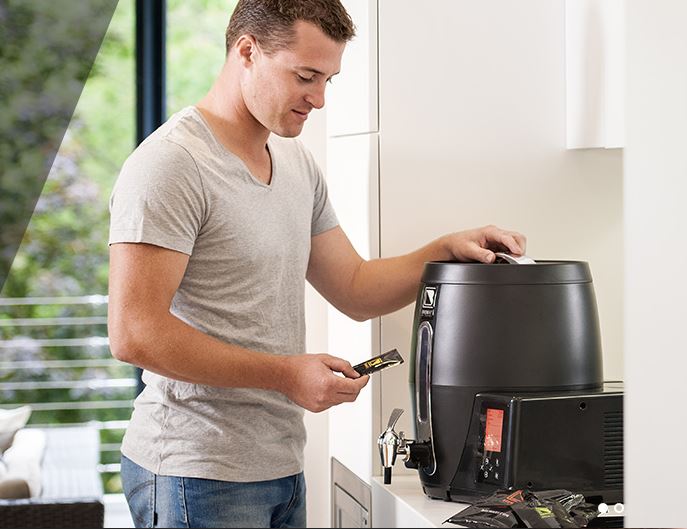 At GadgetGuy we have a saying, “If it plugs in and there is an app for that” we will review it. Never once did we expect to review the app-driven, automated BeerDroid.

BeerDroid is from BrewArt (website here), a member of the Coopers Beer empire. So, it was with fear and trepidation – not – that we responded, “Sure send it over with a good pale ale kit”.

BeerDroid Part 2 will be in a few weeks when the first batch (now in kegging stage) has matured.

At its most basic it is a $799, 10-litre, automated and temperature-controlled brewer with smarts to allow it to work with an app that monitors brewing and sends push notifications to your smartphone. It performs about half of the work.

You buy a BrewPrint (between $28 and $44) that has all the ingredients (minus water). We chose American Pale Ale at $34.

Unpack the keg, download the app, select home Wi-Fi 2.4Ghz and you are ready. We had a little trouble as the router was on a floor above through a concrete floor. So we took it to a couple of metres from router and used the WPS function. From there, back to the kitchen and all was well.

There are a comprehensive set of videos at BrewArt 101. Never having made beer before I must have watched each ten times as there are no printed instructions save a brief setup manual.

Next, you need a container to sanitise everything in. As some of the items are about 30cm long and there is a flexible delivery pipe about 45cm long you need to get a large, flattish, open-top container holding at least 5 litres of hot (not boiling) water. Woollies had a Sistema Klip Rectangle 7l plastic storage container that was perfect because it was wide enough and low enough – a bucket would not be as suitable.

Oh, and you need acres of paper towels.

A note: You need to do this next to a sink. The unit is light enough to lift (so it can be moved back to a brewing location). That tap must have either a telescopic head or a hose attached to fill it as 10 litres of water weighs 22kg plus the machine. Plus, you need to drain said 10 litres and flush any residue avoiding at all costs touching the interior of the sanitised keg.

After moving the BeerDroid to a suitable location, you fill it with 10 litres of room temperature water. The kit has dry ingredients (that you add to the water) and wet ingredients that you add to the kegging process. You don’t stir – just put in the yeast first followed by whatever it was (Malt and Enhancer) and close the lid.

I would love to have shown you a screenshot of the timeline, but it disappeared after kegging – as there was Nothing Brewin’. I suspect that it took about eight-ten days in total to go from start to kegging and I suspect I stuffed the push notifications up for the kegging part – my bad.

Which is where we are now.

Kegging is BeerDroid’s way of fermenting sugar to add Co2 to the brew, and that takes time.

Basically, you sanitise everything, watch a video or ten, and transfer 10-litres of beer via a tap/pipe system to 2 x 5l PET kegs.

Then you wait. The minimum time to create fully carbonated kegs is two weeks. Some brews will benefit from further time conditioning such as stouts – though for my first attempt two weeks will do.

If you keg ferment you need to buy a $699, 4° refrigerated BrewFlo dispenser. That makes sense if you intend to invest in a mini-brewery and want a refrigerated tap system.

BTW – you can opt not to keg but buy 12 x 740m (8.88-litre) PET screw-top reusable bottles. You add hops to the BeerDroid mix for a few days and then buy a bottling kit with bottle carbonation drops (sugar) and a filling arm.

Let’s assume you invest in a BeerDroid and a BrewFlo – $1498 for the man cave. Your only other costs are around $30-40 for the BrewPrint (plus water, sanitiser and labour).

Provided you have a recipe BeerDroid is fully customisable for temperature and various stage times.

Was BeerDroid hard for a newbie?

Not so much hard, but more a little tedious. All up it’s going to take around a month or more to taste the fruits of my labour. And I don’t know if it will work or not.

I am confident BeerDroid will work due to its precise fermentation and measured and tested BrewArt ingredients.

Would you buy it?

I suspect it is pretty foolproof, but it is up to you to do the maths. Put simply do you drink enough to justify the system? If so, you are either deliriously happy or have a problem and need to contact AA.

All I can say at this stage is that you need to do a lot more investigation into home brewing, techniques and equipment before you buy anything. This is the easy way to make pub quality .

Never having home brewed before I expected (hoped) to see results in days, not over a month. So, if you have that expectation, it is not for you.

Next, having no brewing knowledge, I would have preferred a comprehensive ‘cookbook’ instead of the excellently instructive videos. Some people learn by reading and some by seeing. I swear I watched a dozen videos at least ten times before I got it.

And after the BeerDroid has done its work is the kegging stage – another few weeks before drinking stage. Mind you, you can buy more BrewPrints and kegs and start a mini brewery.

My homebrew mate admires the unit and says while its expensive (to his Scottish nature) the ability to both heat and chill (down to 3 deg) and the easy cleaning makes for an excellent product.

I like the BrewPrints packs as they should reduce error. A true homebrewer will eschew them saying they can make beer for 50-100 cents a bottle whereas this is more like $3 a bottle (forgetting capital costs).

We will report back on the BrewFlo, and the American Pale Ale results in a few weeks.